Threatening Posts by the Left are Exposed 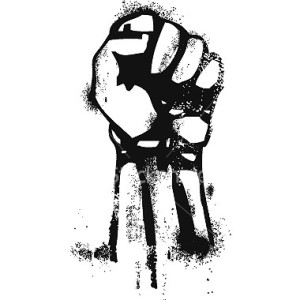 Of course, the Progressive  Left “never lets a crisis go to waste” and they are following Alinsky’s rules to the letter.   Instead of sympathy and empathy for the victims in Tucson, they immediately accused the Right of being involved only a few minutes after the massacre  was announced.    The Left blogs,  announcers, and politicians were  so quick to respond, it is as if they had prior knowledge  of the  tragedy.     To cover for themselves, the  nasty accusations began.  They were getting facts wrong, and quickly announced that Rep. Gabby Giffords was dead.   She wasn’t.   But it appears they expected her to be.

Sheriff Clarence Dupnik, Pima County, AZ ,  spoke live several times and repeated his opinion that  Arizona has become the mecca for prejudice, vitriol, and bigotry, and he placed blame on the media and other sources for inflaming the public in their attacks on the U.S.   Unfortunately, the Sheriff, a Democrat,  was attributing his criticism at the Right when it is the Left that is so filled with hate,  promotes revolution, supports terrorists, and wants to incite violence.  It is the Left that  supports an  ideology that is truly anti-American.  The Daily Kos and Media Matters, wicked leftist websites, on a daily basis,  misstate,  twist news,  and attack people who disagree with their Marxist Communist ideology, policies,  and positions.  That the anchors of the MSM promote and support  these  same  minority views is pathetic.

The media and leftist organizations like the Southern Poverty Law Center, with their  constant propaganda spewing against law-abiding people and organizations,  have awakened Americans.  The lovers of freedom and liberty are revolting and turning away from these leftist networks in droves.    Their covering of the Tucson tragedy is an example of the Left twisting facts, inventing a story, then spinning  and manufacturing information and reporting their creations as  fact.

Now after the spinning, the Left’s  spokesmen are  saying we should turn down the vitriol.   What?  They are the ones who use the inflaming words.  Who can forget Janet Napolitano calling tea partiers “Right-wing extremists”,  Pelosi referring to us as “astro-turf” or Obama saying his opponents were “enemies” and that the left should “Hit back twice as hard.”    Claire McCaskill (D-MO) told the press that if democrats were not allowed to raise taxes on the rich, “It really is time for Americans to take up pitchforks.“  Most recently revealed by a video of  Frances Fox-Piven, a 60’s leftist radical,  was calling for all U.S.  workers to rise up and revolt. Violence has always been Piven’s preferred method of collapsing  the United States.    In 2004, she said that “violence is condoned as long as it is part of a grand plan!”   It was she who was recently telling followers of the Left to rise up and increase the violence.  It was she and her ilk who are promoting  a revolution in the U.S.  like those occurring in other countries.   Normal, God-fearing, patriotic Americans are their targets!  That means You!

It  was more than likely that the planned assassination  of  Rep. Giffords was a follower of the Left.  The best indicator of Jared Loughner’s ideology  was the  listing of his favorite books on his MySpace page as being  The Communist Manifesto and Mein Kampf.   How many  people on the right would list those ideological books as their favorites?  The answer is NONE!

The squatters in the White House  are believers and extol another Communist tyrant, Mao.  Normal Americans would not hang  a Christmas bulb with  Mao’s face on it like the Obama’s did.    Normal American’s are not prone to violence, but the Left is known for it.    There is no doubt that the Tucson madman is  a Progressive.

“This slaughterer was a liberal. This is what they teach, this is the poisonous fruit of their indoctrination. Clearly, Loughner is sick, mentally ill — but suckling at the lefty teat is deadly poison for the soul.”

Jim Hoft, Gateway Pundit, reported that “One veteran Democratic operative, who blames overheated rhetoric for the shooting, said President Barack Obama should carefully,  but forcefully,  do what his predecessor did.

“They need to deftly pin this on the tea partiers,” said the Democrat. “Just like the Clinton White House deftly pinned the Oklahoma City bombing on the militia and anti-government people.”

Look at the newly  uncovered  examples of  what the Left is promoting.    They are targeting their opposition..the Republicans and the Birthers.  Have you seen any Right-wing posters like this? 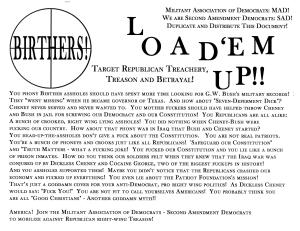 Regarding a CNN discussion, a commenter  wrote that he had  just watched a report  and panel discussion with Wolf Blitzer  about the shooting.  They were  trying to paint Sarah Palin as the villain  that spurred Jarred Loughner to action.

The Progressive  Left’s main political blog, the Daily Kos,  quickly deleted the following demented posting from their blog.   On to the game they play, a few bloggers captured the post before the Daily Kos deleted it.  Who is the insane Blue Boy who wanted to commit suicide himself and had tried to do so?   Perhaps the FBI should look into the posters at Daily Kos  and Media Matters as well as those in charge  who are undoubtedly  responsible for inciting violence.   Markos Moulitsas, the editor- in- charge and founder of The Daily Kos, who takes his marching orders from George Soros and John Podesta, should be investigated for their anti-American postings.

The Daily Kos continues blaming this shooting on  right-wing rhetoric, while the leftist politicians are ramping up more legislation that fits their agenda, yet it has nothing to do with the shooting.   Bob Brady (D-PA) says he will introduce a bill that would ban symbols [surveyors symbols] like that now-infamous campaign cross hair map of Sarah Palin’s.  Then he says,  “We need to be more civil with each other.  We need to tone down this rhetoric.” The idiocy of saying a political map led the  madman in Tucson to violence is beyond comprehension.    As expected, Democrats  are calling for more gun legislation.  Rep. Carolyn McCarthy (D-N.Y.) and Sen. Frank R. Lautenber (D-NJ) are both  using the shooting massacre as an opportunity to introduce legislation targeting the high-capacity ammunition clip that Jarred used.

Check out the Daily Kos’  diatribe a couple of days prior to the shooting.  These have been deleted from their site.

“My Congress WOMAN voted against Nancy Pelosi!  And is now DEAD to me!” 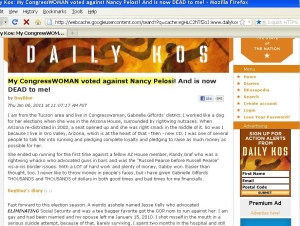 Additionally,  the hits against the right just  keep coming.   The American Patriot Foundation received an anonymous, threatening letter postmarked from Columbus, OH with this message.

This is to inform you that Ltc. Larkin (sic) is a FUCKING COWARD who should be put in front of a firing squad and shot. If I see his ass on the Streets of Washington I will save the government the expense of a trial, I’ll dip a bullet in shit and shoot him in the head. This fuck off deserves to die on the streets of America.

This threat was submitted to Postal Inspectors, but the agency could not identify the venomous writer.   How hard did they try to find the writer of this nasty, vile, threatening letter?    Does this sound like a right-winger?  Of course not.  The  Right totally supported LTC. Lakin in his quest to determine if Obama was eligible to serve as president. Like millions of others Dr.  Lakin, who is now a political prisoner, wants Obama to prove he is a natural born citizen.   The Left is afraid to know the truth about Obama and they protect  Obama instead of standing up for the  Constitution.

Who is responsible for  all of these Leftist  postings?    Exposing the Left’s hypocrisy and their promotion of all that is anti-American must be our  goal.  To save America, we can not let them take over the conversations.   To do so, is to allow them to be the  major voice of  Americans, and they are the wrong voice.   Expose them and their words.   Keep them on the defensive.  They have nothing to offer except fear, violence  and oppression.   We must press for the Pro-American Voices to be heard on the MSM.   We will  make no apologies for our  United States.   We must suppress the  voices from the Left as being the major spokesmen for our country.  We  must get louder.   The Soros machine and its many tentacles must be disassembled and put into the nearest dumpsters.  These people are dangerous!

We will through perseverance, persistence, and exposure send these evil people to the dust bins of history.   Let it be now.

108 responses to “Threatening Posts by the Left are Exposed”