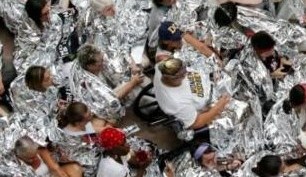 While the progressive left blames President Trump for the actions of one unhinged man who shot newspaper employees because of a personal vendetta, members of the progressive left, apparently following the advice of Rep. Maxine Waters, are attacking young female reporters.

During “protests” astroturfed by the community-organizer-in-chief, young white female reporters were bullied by a mob in Portland, OR:

While doing her live report, a protester confronted [Genevieve] Reaume by shoving a cellphone in her face and saying “look at her, she’s reporting the most f*cked up news there is to f*cking report.”

“You stay the snitching little b*tch that you are,” a protester is heard saying on the video. “You in the orange, those shoes are very tacky with that outfit boo-boo, your clunky ass.”

Another protester chimes in saying, “and your eyeliner is clumpy — it looks like a hot mess. Check your makeup before you go out next time, runny.”

“That sh*t looks cheap as f*ck, so does your foundation,” the abuse continues.

The vicious attacks on Reaume’s appearance persisted until she was eventually forced to end her coverage.

Another reporter was “grabbed and shoved,” apparently by the same group:

Just got grabbed & shoved by a protester.

A woman & 2 kids showed up for an appointment @ the ICE offices.

FYI- we choose what footage makes air later, & we can blur faces.

This small group (one of whom is ID-ed as the spokesperson) don't know or don't care. pic.twitter.com/c9mBx1lvJP

The reporter later tweeted that the mob’s behavior was “frightening” to her.

As with the Ferguson “protests,” it seems that the progressive left will continue to be allowed their “direct action” (criminal behavior) during “protests,” especially given that they very carefully make sure to stage these events in Democrat-run cities. In those cities, sympathetic politicians are more likely to order the police to “stand down.”

The longer this kind of uncivil behavior is tolerated, indeed encouraged, the more of it our society will see, to the detriment of all.

It’s no coincidence that members of President Trump’s administration are being attacked in public and little if nothing is being done to the perpetrators, other than them becoming folk heroes in “progressive world,” which includes the media.

Today is supposed to be a particular day of protest against President Trump’s policies. Already the media are reporting on the “hundreds” and “thousands” who are expected to attend these events.

How much coverage will they give to the millions who are in tune with the president’s policies, especially on illegal immigration?

Indeed, you probably also won’t see very much reporting about recent polls that show that President Trump’s approval rating has gone up since the astroturfed “crisis” about “family separations” began. Interestingly enough, the separations result from rules promulgated by Bill Clinton and Obama.

Yes, being compassionate people, Americans prefer that families (if they are indeed families, which many are not) remain together. However, We the People want the families detained together and then deported together, if they’re illegally in this country and ineligible for asylum (a status that describes most of the border crashers).

At the top of this post is an image of protesters at the Capitol office building this past week. They rolled themselves in silver blankets, to symbolize Trump’s treatment of detained illegal alien children. (They look like idiots.)

Unfortunately for the protesters, the images of alleged mistreatment come from the Obama administration. Oh, the horror!

Border patrol agents have said that conditions for detainees are better under Trump and that the media are distorting reality for political reasons. 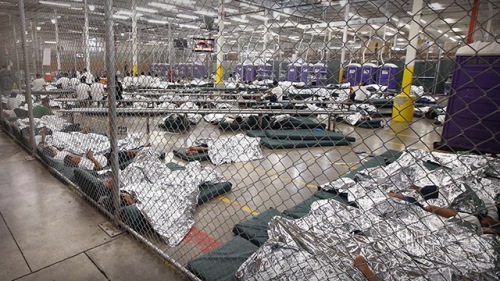 There are more images showing how Obama separated and detained illegal alien children at this link.

These protesters, however, don’t care about the truth. In fact, they ignore the truth because they can’t handle the truth. All they really want is an excuse, any excuse, to protest and to “resist” President Trump who, despite what Tom Perez thinks, is indeed the

Real President of the USA.

Instead, We the Real People of the USA are gearing up to enjoy the Fourth of July holiday, when all the citizens of the USA should get down on their knees and thank God for this wonderful Republic.

We the Real People of the United States will be flying our flag, the Stars and Stripes, instead of the Mexican flag, as these “protesters” are doing. SHAME!

And may God bless the real president of these United States.