The Mysteries as Voiced by Ms. TuTu Farcical 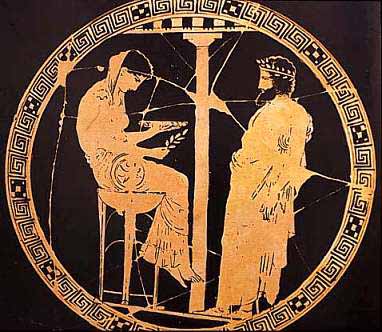 As the year began  in  2010,  Ms.  Tutu Farcical of the Oracle wrote an article that we thought should be revisited.  We thought it would be interesting to see if any of the questions plaguing us at the time from 2008 – 2009  were answered during the last two years.   Not only have  most of them not been addressed, but we could easily add more questions that have arisen since her initial publication.

It should be noted that Ms. Farcical is not a forward-looking prophetic woman.  Instead she looks deep into the past, connects fragments of information, and spits out her visions in questions, often riveting, often seeing, and always fascinating.   She is a seer of the past, but may have visions of the future.  We sometimes believe her questions arise from the Oracle’s vapors that erupt from the earth.  An engaging personality is our own Ms. Farcical, a prophetess whose past includes  stints as Carnac the Magnificent’s  stand-in  for years.

We are as shocked at rereading these unanswered questions presented by Ms. Farcical  as you may be.  A full two years has passed  and as questions mount these cases remain. The greatest and most looming mystery remains today as it was then, “Who is Barack Obama?”

Furthermore, these unsolved crimes and stories  prove that the media or investigative journalists (as they like to call themselves)  haven’t done their jobs!  They haven’t investigated any of these perplexing questions posed by Ms.  TuTu Farcical.  Many within the writers community  believed these stories would be  swept under the carpet and no one would notice.

Ms. Tutu Farcical of the Oracle  has recently consulted the powers that be by viewing into her brand new bowling ball and is busy compiling a new list of unsolved murders, mysteries, and convoluted stories.  You can help.   Please add your two cents from the “change”  left in your pockets to the discussion. We welcome all newcomers to participate! Make this your year to add a comment or two.

“SECRETS and MORE SECRETS REVOLVING AROUND THE HAUNTED HILL”

MYSTERIES and Stories that the “No Clue” Lame Street Media Didn’t Cover in 2009. These are Questions to Ponder.  Will any of these mysteries be solved in 2012, a full 3 years after the fact?  TuTu’s Probing Questions follow:

1. What was really behind the Air “Farce” One Tour of New York City?
2. Who are the White House visitors that have the same names as Bill Ayres and Jeremiah Wright?
3. What was Nidal Malik Hasan’s role on the Transition Team (Ft. Hood terrorist)?
4. What is the purpose of the plot to bring Gitmo Terrorists to New York and Illinois?
5. Who was behind the American Police Force in Hardin, Montana?
6. Why was Obama adopted by the Crows? Whose idea was it?
7. Was Carl Venne, Crow Tribe, murdered?
8. Why would the Salahi’s take the 5th? On what grounds will they claim the 5th? What connection is the White House hiding?
9. Judge Carter’s clerk – Who pays his salary? Who recommended him for the job?
10. Who coined the term “all wee-weed up”?
11. Who is the Mysterious Blonde NY Socialite that is receiving text messages from POTUS?
12. Why is Congress silent on the infiltration of commie czars?
13. Why did the Secret Service visit Ted Kennedy’s compound just hours before his demise?
14. Why did the Catholic Church give the divorced Senator Kennedy a Catholic funeral and burial?
15. Whose Social Security Number is being used by POTUS this year?
16. Who registered for a Social Security number in Connecticut as Barack Obama?
17. How many Social Security Numbers Does POTUS have?
18. Was POTUS really a Constitutional Lecturer? Why have no students come forward to talk about their instructor?
19. Who are the current American Socialists and Communists holding elected offices in the USA?
20. Does the White House keep two sets of books for recording visitors?
21. Where is Patrick J. Fitzgerald, US Attorney for N. Illinois, and what is he really working on?
22. Where was Madelyn Dunham treated for cancer? Did she die? … from a broken hip?
23. Where was Stanley Ann Dunham Obama Soetoro treated for her cancer? What hospital? What city?
24. Is the guy in China BO’s twin or elder brother? Why the play on his American mother’s (Ruth) surname Nidesand to Ndesandjo? Why won’t he divulge his age?
25. Where is Stanley Ann currently residing? What name is she using for the new year?
26. How did Sarah Obama enjoy her stay with the Saudi King while she was on Haj?
27. Who paid for the new addition to Sarah’s home, her electricity hook-up and plumbing? Who paid for her trips to the USA, Saudi Arabia and Libya? Who established her trust fund?
28. What are the Muslim contributions to the tapestry of American culture that BO bragged about?
29. Will American women be permitted to wear plaid burqas?
30. Will PETA have a problem if those burqas are fur-trimmed?
31. Who chose the School “Safety” Czar, Kevin Jennings? Is he related to Frank Marshall Davis?
32. How many “fishy” bloggers did the White House catch?
33. Who attended Samantha Power’s and Cass Sunstein’s baby shower?
34. Why did BO book out of Norway after he picked up the formerly prestigious Nobel Peace Prize?
35. Who paid for Gitmo’s Khalid Sheik Mohammed’s new “publicity head shot?”    Who is his beautician?
36. Was Ft. Hood terrorist, Nidal Malik Hasan’s  body shaved?
37. Will there be a parade when Gitmo prisoners arrive in the USA? Will it be declared a National Muslim holiday?
38. Why didn’t POTUS receive the Dalai Lama?
39. Why hasn’t the POTUS filed suit for libel and slander against Larry Sinclair?
40. Why is 71 year-old Abercrombie resigning from his permanent position? Is he a quitter?
41. Why was POTUS sworn in twice? Why was the second swearing PRIVATE?  Why weren’t the WH photographers allowed to witness and videotape the second swearing? Who was the photographer that took the “official” photo?
42. Why was the media silent regarding Sotomayor’s LaRaza affiliation?
43. Was Obama’s Birth Certificate blasted to the moon when they needed an emergency distraction?
44. Who in Congress profited from the Swine Flu Scare and the vaccine production?
45. Why have no charges or investigations been filed by the Department of Justice against ACORN or the Black Panthers?
46. Who is Barrack Hussein Obama?
47. Who is Obama’s Puppet Master?
48. Who was the well-dressed Indian man assisting the crotch-bomb Terrorist?
49. Who has the video that was shot of the crotch-bomber at the Netherlands Airport?
50. What is the purpose of the Executive Order concerning InterPol?

Isn’t She Just TuTu Much?