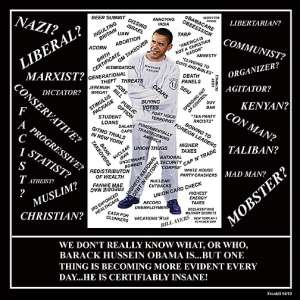 By Robin of Berkeley

So what is the matter with Obama? Conservatives have been asking this question for some time. I’ve written a number of articles trying to solve the mystery.

Even some liberals are starting to wonder. James Carville railed about Obama’s blasé attitude after the catastrophic oil spill. The New York Times’ Maureen Dowd revamped Obama’s “Yes We Can” motto into “Will We Ever?”

The liberal women of the TV show “The View” have expressed sympathy for Michelle Obama’s living with a man so out of touch. Peggy Noonan, hardly a vehement Obama foe,  recently pronounced him disconnected.

Obama’s odd mannerisms intrigue a psychotherapist like me. He also presents a serious diagnostic challenge.

For one, Obama’s teleprompter and the men behind the Blackberry keep him well-scripted. We know so little about the facts of his life.

But it’s more than just a lack of information. Obama himself is a strange bird. He doesn’t fit easily into any diagnostic category.

Yet a personality disorder like narcissism does not explain Obama’s strangeness: his giggling while being asked about the economy; his continuing a shout-out rather than announcing the Ft. Hood shootings; or his vacations, golfing, partying and fundraising during the calamitous oil spill.

Take also Obama’s declaring on the “Today Show” that he wants to know whose ass to kick. Consummate narcissists would never stoop to this vulgar display of adolescent machismo.

Obama is flat when passion is needed; he’s aggressive when savvy is required. What’s most worrisome is that Obama doesn’t even realize that his behavior is inappropriate.

So if it’s not just simple narcissism, what is wrong with Obama? Since I’ve never evaluated him, I can’t say for sure. But I can hazard some educated guesses.

If I saw a client as disconnected as him, the first thing I would wonder: Is something wrong with his brain? And I’d consider the following theoretical diagnostic possibilities.

—Physical problems: There are a multitude of physiological conditions that can cause people to act strangely. For instance: head injuries, endocrine disturbances, epilepsy, and toxic chemical exposure.

It makes me wonder: Did Obama ever have a head injury? His stepfather in Indonesia was purportedly an alcoholic abuser. Was Obama subject to any physical abuse?

— Drugs and alcohol: Damage to the brain from drugs and alcohol can also cause significant cognitive impairments. Obama once said that there were 57 states — and didn’t correct himself. Memory problems can be caused by both illicit and prescription drug use.

Obama admits to a history of drug use in his youth. Did his usage cause some damage? Does Obama still use?

—Asperger’s Syndrome: Also known as high-functioning autism, Asperger’s causes deficits in social skills. A person with Asperger’s can’t read social cues. Consequently, he can be insensitive and hurtful without even knowing it.

Could Obama have Asperger’s? He might have some mild traits, but certainly not the full-blown disorder. In contrast to Obama, those with Asperger’s get fixated on some behavior, like programming computers. Obama lacks this kind of passion and zeal.

–Mental Illness: Obama’s family tree is replete with the unbalanced. His maternal great-grandmother committed suicide. His grandfather, Stanley Dunham, was particularly unhinged: He was expelled from high school for punching his principal; named his daughter Stanley because he wanted a boy; and exposed young Barry to not just drunken trash talk, but unrestricted visits with alleged pedophile Frank Marshall Davis (who might or might not be Obama’s biological father). Barack Sr. was an abusive, alcoholic bigamist.

Since mental illness runs in the family, does Obama have any signs? Yes and no. No, he is not a schizophrenic babbling about Martians. But there are red flags for some other conditions.

While Obama doesn’t appear to hallucinate, he seems to have delusions. His believing he has a Messiah-like special gift smacks of grandiose delusions. His externalizing all blame to conservatives, George W. Bush, or the “racist” bogeyman hints at persecutory delusions.

Along with a delusional disorder, Obama may fit for a mild psychotic disorder called schizotypal disorder. It may explain some of Obama’s oddness.

People with schizotypal disorder hold bizarre beliefs, are suspicious and paranoid, and have inappropriate and constricted affect. They have few close friends and are socially awkward. A schizotypal is someone like your strange cousin Becky who is addicted to astrology, believes she is psychic, and is the oddball at social gatherings.

Schizotypal Disorder does ring some bells vis-à-vis Obama. One way the diagnosis doesn’t fit, however, is that schizotypals are generally harmless, odd ducks. Not so with Obama.

—Trauma: My gut tells me that Obama was seriously traumatized in childhood. His mother disregarded his basic needs, dragged him all over the place, and ultimately abandoned him.

But I think there may be something even more insidious in his family background. While I can’t prove it, the degree of Obama’s disconnect reminds me of my sexually abused clients.

With serious sexual abuse, the brain chemistry may change. The child dissociates — that is, disconnects from his being — in order to cope. Many adult survivors still dissociate, from occasional trances to the most extreme cases of multiple personality disorder.

Apparently, young Barry was left in the care of Communist Frank Marshall Davis, who admitted to molesting a 13-year-old girl. As a teenager, Obama wrote a disturbing poem, “Pop,” that evoked images of sexual abuse — for instance, describing dual amber stains on both his and “Pop’s” shorts.
Would trauma explain Obama’s disconnect? In many ways, yes. A damaged and unattached child may develop a “false self.” To compensate for the enormous deficits in identity and attachment, the child invents his own personality. For Obama, it may have been as a special, gifted person.

Let’s return now to my original question: What is wrong with Obama? My guess is a great deal. The answer is complex and likely includes some combination of the above.

Along with the brain issues are personality disorders: narcissism, paranoia, passive-aggressiveness. There’s even the possibility of the most destructive character defect of all, an antisocial personality. Untreated abuse can foster antisocial traits, especially among boys.

If my assessment is accurate, what does this mean?

It means that liberals need to wake up and spit out the Kool-Aid…and that conservatives should put aside differences, band together, and elect as many Republicans as possible.

Because Obama will not change. He will not learn from his mistakes. He will not grow and mature from on-the-job experience. In fact, over time, Obama will likely become a more ferocious version of who he is today.

Why?  Because this is a damaged person. Obama’s fate was sealed years ago growing up in his strange and poisonous family. Later on, his empty vessel was filled with the hateful bile of men like Rev. Wright and Bill Ayers.

He is not capable of it.

The Nasty Scar
Another  close-up view of the scar on Obama’s head.