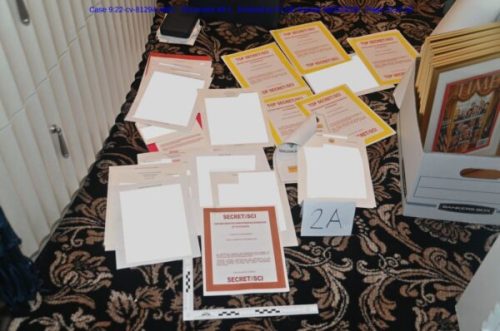 Documentgate. Yet another anti-Trump witch hunt, hoax, double standard. Joe Biden’s Deep State is pulling out all the stops, not even bothering to put on a facade of justice or simple fairness or common courtesy. It’s “let’s get Trump by any means necessary.” In other words, Lawfare.

President Trump, on Truth Social, recently shared a video wherein Jesse Watters breaks down the unfairness of the raid on Mar-a-Lago. Watters revealed how previous presidents stored their own presidential records:

Bill Clinton kept his presidential records in a sock drawer (some of them, audiotapes of classified information) and also at an abandoned car lot.

George W. Bush kept his presidential records in a warehouse in Texas.

By contrast, President Trump kept his presidential records in a locked storage room, as approved by the FBI, within his walled, private compound that is secured 24/7 by the Secret Service.

Nevertheless, President Trump was raided by Biden’s FBI while none of the former presidents mentioned above were ever raided, even those confirmed to be holding classified records. For example:

While the storage of these documents appears to be with the full knowledge and coordination of NARA, it still raises significant questions, not just concerning the raid of Mar-a-Lago, but also surrounding the legal actions being taken by the Biden administration against Trump over the storage of these documents. Seeing as Mar-a-Lago is Trump’s Florida home, it is protected by Secret Service, making it far more secure than whatever setup they likely had at the former furniture store space. There is no mention of what kind of security measures are in place to protect the Obama documents — if there are any at all.

In addition, because of a ruling by an Obama-appointed judge, Bill Clinton was not in violation of the law by storing audiotapes of classified information in his sock drawer.

The court ruled that even though classified, these records were Clinton’s personal property, not the property of the government:

The tapes became controversial when the watchdog group Judicial Watch went to court to demand the tapes be given to the National Archives and Records Administration, so the American people could hear them.

[A] few paragraphs of the 27-page ruling … indicated a president had wide latitude concerning documents under the Presidential Records Act.

“Under the statutory scheme established by the PRA, the decision to segregate personal materials from Presidential records is made by the President, during the President’s term and in his sole discretion,” Jackson wrote.

“Since the President is completely entrusted with the management and even the disposal of Presidential records during his time in office, it would be difficult for this Court to conclude that Congress intended that he would have less authority to do what he pleases with what he considers to be his personal records,” the judge wrote.

The ruling also indicated seizing such records was not appropriate.

“Because the audiotapes are not physically in the government’s possession, defendant submits that it would be required to seize them directly from President Clinton in order to assume custody and control over them,” Jackson noted. “Defendant considers this to be an ‘extraordinary request’ that is ‘unfounded, contrary to the PRA’s express terms, and contrary to traditional principles of administrative law.’ The Court agrees.”

We can attempt to answer that question by stating the obvious:

The left, the mainstream media, the Lawfare group, the Deep State, the Democrat Party, and basically anyone who ever opposed the Trump presidency have never treated Donald Trump as if he was ever president.

In their minds, Trump didn’t win the 2016 election. (Oh, yes. They are all “election deniers” and are thus “enemies of the state” and threats to democracy, if you follow the Biden standard. But that’s just another double standard to shake our heads over.)

They never treated Donald J. Trump as President of the United States because they believed, without evidence, that Hillary Clinton, who allegedly won the popular vote, actually should have been inaugurated.

Therefore, in their minds, Trump was always an illegitimate president. And, besides, being Trump, he’s simply unworthy of the presidency, no matter what the peons think.

The anti-Trump cabal also believed, because of the Russia, Russia, Russia HOAX, among other slanders, that President Trump could not be trusted to actually assume the duties of the presidency or command the respect he deserved as president.

So the Deep State did all they could to keep President Trump out of the loop. They used lawfare against him, initiating a bogus counterintelligence investigation of him, then initiating more investigations based upon other bogus claims like “obstruction” of justice, not to mention initiating two impeachments that went nowhere because they were similarly based within this slow coup that was waged against Trump’s entire presidency.

The anti-MAGA left, the mainstream media, all of these true enemies of democracy (because what else can you call those who will not accept the will of the People who elected Trump?) did not and will not ever acknowledge that Trump rightfully held the constitutional powers of the presidency. Now, after he’s left office, they assuredly will never accord him the respect and courtesy he deserves as a former president.

To the anti-Trump cabal, Trump is a “deplorable.” Trump is a lesser person, unseemly, unworthy, distasteful, not one of them.

Trump and anyone who supports Trump, or who ever has supported him, according to Joe Biden and his Deep State, are “enemies of the state.”

The anti-Trump cabal will continue to hound President Trump forever, lest he again be elected democratically by the People of the United States, which seems very likely to happen.

Equal justice under the law no longer exists in the United States of America.