The Egypt Crisis in a Global Context: A Special Report 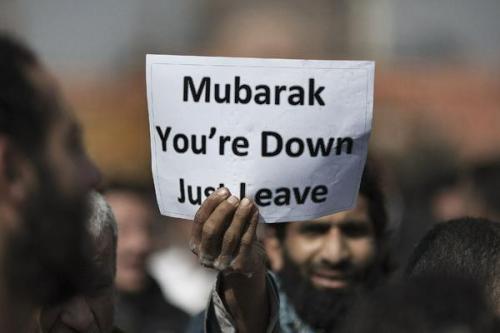 An Egyptian demonstrator holds a sign up following prayers in Tahrir Square in Cairo, on January 31, the seventh day of mass protests calling for the removal of President Hosni Mubarak.  Marco Longari/AFP Photo/Newscom

It is not at all clear what will happen in the Egyptian revolution. It is not a surprise that this is happening. Mohamed Hosni Mubarak has been president for more than a quarter of a century, ever since the assassination of Anwar Sadat. He is old and has been ill. No one expected him to live much longer, and his apparent plan, which was that he would be replaced by his son Gamal, was not going to happen even though it was a possibility a year ago. There was no one, save his closest business associates, who wanted to see Mubarak’s succession plans happen. As his father weakened, Gamal’s succession became even less likely. Mubarak’s failure to design a credible succession plan guaranteed instability on his death. Since everyone knew that there would be instability on his death, there were obviously those who saw little advantage to acting before he died. Who these people were and what they wanted is the issue.