END_OF_DOCUMENT_TOKEN_TO_BE_REPLACED

What will it take for European countries, our country, and all of their assorted leaders to realize, once and for all, that we are at war with “radical Islam”?

END_OF_DOCUMENT_TOKEN_TO_BE_REPLACED

On Thanksgiving Day, a notoriously progressive newspaper, the St. Louis Post-Dispatch, ran an editorial that outrageously likened the iconic Pilgrims to ISIS. The anonymous author(s) claimed that their suggested revised narrative of the origin story of the American people …

… is truthful, citing as their source a television program on the also notoriously progressive PBS.

END_OF_DOCUMENT_TOKEN_TO_BE_REPLACED 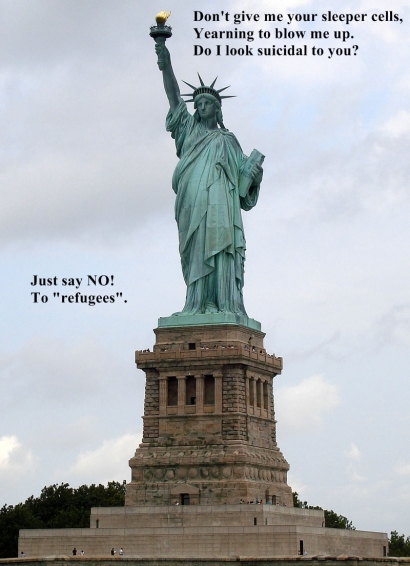 On the subject of Syria, ISIS, and “refugees”, Bill O’Reilly opined that Barack Obama is “delusional.” Donald Trump said, with particular insight, that Obama “doesn’t have a clue or he does have a clue and he has evil intentions–I don’t know.” A writer at WND has similar questions:

In every area, Obama demonstrates an unfortunate affinity for that which normal people would describe as destructive, corrupt, evil.

Whether this is because Obama is evil at his core, or whether there’s a decent person locked up inside but who has been traumatized and brainwashed – a Manchurian president, programmed not by exotic far-off communist brainwashers, but by a nonstop sequence of corrupting influences throughout his life – is not ours to know.
END_OF_DOCUMENT_TOKEN_TO_BE_REPLACED

Harper-Mercer: Mentally Ill or on a Mission?

It seems apparent that we may never learn the whole truth about the recent murders in Oregon. The official narrative seems to be that the shooter, Christopher Mercer (aka Chris Harper-Mercer), was a mentally ill loser who somehow gathered a “legal” arsenal, carried a rifle and 5 handguns into Umpqua Community College without being seen or stopped, and systematically, within 10 minutes, murdered 9 fellow students–shooting one man 5 times (or 7 times) and one woman 10 times–and wounding 9. As usual, various scenarios are offered.