Someone emailed this to me today, and it seems quite pertinent, as the lameduck Congress appears poised to ram through the Dream Act (cost to taxpayers, approx. $20 billion).  The Dream Act, aka backdoor amnesty for illegal aliens, against the express will of the American people.

The following is from a speech by President Theodore Roosevelt, with emphasis added:

“In the first place, we should insist that if the immigrant who COMES HERE IN GOOD FAITH becomes an American and ASSIMILATES himself to us, he shall be END_OF_DOCUMENT_TOKEN_TO_BE_REPLACED

News of the Day and Open Thread

I wanted to share some news with you, not least because we need a new open thread. Here’s some of the news that caught my eye today (other than Wikileaks, which has its own thread):

The ever progressive Swiss, once again, lead the way: “Swiss voters approved on Sunday a plan to AUTOMATICALLY DEPORT foreigners who commit serious crimes or BENEFIT FRAUD,” according Reuters [emphasis added]. http://www.rttnews.com/Content/MarketSensitiveNews.aspx?Id=1491820&SM=1

Note that this was the result of a VOTER initiative, passed against the will of the government, which now must write a law to conform with the WILL of the SWISS PEOPLE. A Swiss Tea Party? Reuters also informs us that the “right wing” Swiss People’s Party put forth this initiative, as well as a previous one that banned minarets on mosques in Switzerland. END_OF_DOCUMENT_TOKEN_TO_BE_REPLACED 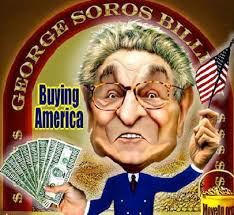 I  think that this old article from 1997 is important enough to post today.
.
“I am sort of deus ex machina- I am something unnatural,” George Soros says of himself.
.
Described by the New York Times as “The world’s single largest donor” (Dec. 17,1996), Soros uses his philanthropy to change – or more accurately deconstruct – the moral values and attitudes of the Western world, and particularly of the American people. While others give to the arts and higher education or to better the quality of the lives of their fellow men, Soros funds campaigns for euthanasia and to legalize illegal drugs.
.

George Soros, who made billions plying the markets, last month set himself up as its strongest opponent in an Atlantic Monthly article titled “The Capitalist Threat.” He writes that “Totalitarian ideologies like communism and Nazism have a common element: they claim to be in possession of the ultimate truth.” He observes that laissez faire capitalism makes the same claim as well. Admitting, that Communism and Nazism were murderous, he nonetheless asserts that laissez-faire capitalism poses a future menace greater than both.

END_OF_DOCUMENT_TOKEN_TO_BE_REPLACED

There is a beautiful, blonde lady I want to write about here. Another hero of mine. A top of the list hero. Governor Jan Brewer. Yes, I can say that I am lucky enough to have met her. She has a 1000 watt smile, and sparkling, kind eyes. She has the aura of honesty and  old fashioned values. She has the feel of a woman that is truly a People’s person.

Her get back to basics beliefs sit perfectly with my own. Her open hearted welcome and kindness to those around her shows. Yes she is a star. Standing tall and brave for her state of Arizona, that has massive problems with illegals as well as a very hard hit job and housing market. The lady is real. The lady is approachable, huggable and a class act.

I have covered Governor Brewer on  the Bordering on Insanity thread as well as a bit on America Under Attack, and the Hero thread. This one is for Governor Jan Brewer alone.

A star, for a real star.

Photo “A 9-year-old girl toils under the hot sun, making bricks from morning to night, seven days a week. She was trafficked with her entire family from Bihar, one of the poorest and most underdeveloped states in India, and sold to the owner of a brick-making factory. With no means of escape, and unable to speak the local language, the family is isolated and lives in terrible conditions.”

The attack on America is now being done by Secretary of State Hillary Clinton who included the United States in the list of nations that traffic in human slavery.  This is the first time that the US has been included on the list.  If Human Rights and human trafficking were so important, why haven’t these issues been faced and brought up with the countries that are the primary offenders during her tenure as SOS and Obama’s as president?  Why hasn’t this problem been on the front pages of our newspapers?  Is there any question about her leftist leanings?