George Has a Story to Tell…

Don’t All the “Unrelated” Obamas? 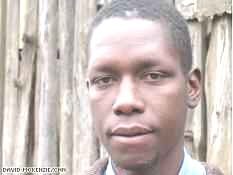 We are watching several  of the Obamas go from rags to riches because of their falsified relationship to a fraudulent U.S. president.   We’ve read about books created by Auma, Mark, Barack Obama Jr.,  and we are told Ann Dunham Obama Soetoro’s  thrilling Indonesian blacksmithing thesis is to be published by Maya.   We’ve been exposed to Barack’s daddy’s dream of socialism for Kenya, and now George  believes he has a story to tell.   So many Obamas, so many stories!

As a reminder,  George was born in 1982  to Jael Otien, the supposed mistress/wife  of polygamist Barack H. Obama Sr.   He was raised in Nairobi by his mother and a French stepfather (name unknown)  until they divorced.   Supposedly,  Jael now lives in Atlanta, GA with her second husband (name unknown).   Coincidentally, George’s other half-brother, Mark Ndesandjo,  lived close to Jael when he attended Emory University, but that’s another story. END_OF_DOCUMENT_TOKEN_TO_BE_REPLACED