We’ve been having fun lately, comparing photos of various Indonesian personages to our current president. See here,  here and here, for examples. The photo at the top of this post is said to be of Barry Soetoro (aka Barack Hussein Obama II, circled) in 1969 or 1970, depending upon which source you read. As captioned by the Washington Post, the photo was taken at a graduation ceremony at SDN Menteng 1, the Muslim public school that Obama attended while he lived in Indonesia. Our post at this link examines Obama’s numerous schools and teachers, for more context.

END_OF_DOCUMENT_TOKEN_TO_BE_REPLACED 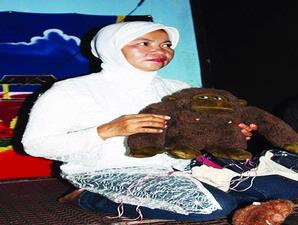 What information was taken to her grave?

You haven’t heard of Lia?  Neither had we.  The unknown, until now, adopted sister of Barack Hussein Obama died unexpectedly February 26, 2010.   The USA media didn’t cover the story of this woman nor was her name found until the last few days.   A competent WTPOTUS sleuth, Leza, and other researchers  uncovered an article about an adopted “kakak” (literally “older sibling”, often translated as “brother”)  in Indonesia, named Lia or Lee.  Following up on a tidbit of information and other clues, more information was uncovered.  Lia was an adopted sister, not a brother.  Two Indonesian obituaries were just found. These tell the final tale of this woman nicknamed Lia, whom Obama called “Mbak Nun”.

UPDATE: Barack’s half-sister Maya called Lia a fraud, but a PDF document from a web site of the Consulate General of the Republic of Indonesia appears to confirm a relationship between Lia and Barack Hussein Obama. Start near the bottom of page 14. It’s in Bahasa Indonesia (the language of Indonesia), but even without translation you can see Lia’s and Barack’s names. Translations of that text can be found in comments to this post.
END_OF_DOCUMENT_TOKEN_TO_BE_REPLACED