We’ll soon see what “smart justice” will look like, under progressives. First, a little background, from the Los Angeles Times no less: [emphasis added to quotes]

In a Democratic primary election, McCulloch got trounced 57% to 43% by Wesley Bell, a city councilman from the St. Louis suburb of Ferguson, Mo.

You might remember McCulloch. For a brief moment, on Nov. 24, 2014, he was the most-watched law enforcement official in America.

That night, eastern Missouri was bracing for violence as McCulloch announced that a grand jury had declined to indict police Officer Darren Wilson for fatally shooting unarmed 18-year-old Michael Brown after a struggle in the city of Ferguson.
END_OF_DOCUMENT_TOKEN_TO_BE_REPLACED

The video speaks for itself. Fake news versus truth. Conspiracy theories versus truth. Crazy liberals! It’s interesting to watch Democrat officials getting hoist on their own petard.

END_OF_DOCUMENT_TOKEN_TO_BE_REPLACED

There once was an aging hero. For ninety-three long years he has graced this world.  He served admirably in WWII, as a member of a group of African-American pilots known collectively as the Tuskegee Airmen.

During World War II, Black Americans in many U.S. states were still subject to the Jim Crow laws and the American military was racially segregated, as was much of the federal government. The Tuskegee Airmen were subjected to racial discrimination, both within and outside the army. All Black military pilots who trained in the United States trained at Moton Field, the Tuskegee Army Air Field, and were educated at Tuskegee University, located near Tuskegee, Alabama …

END_OF_DOCUMENT_TOKEN_TO_BE_REPLACED

Consider this CNN article about the Baltimore neighborhood that was the scene of recent riots (h/t Zenway). The writer says, about an older man–a blue-collar worker–who once lived in the neighborhood:

He sat like a sentry, watching not just the games but the neighborhood as well.

I knew Mr. Shields’ routine because I was his neighbor. I grew up in the West Baltimore community that was rocked this week by protests over the death of a young black man in police custody.

It’s surreal to see your old neighborhood go up in flames as commentators try to explain the rage with various complex racial and legal theories. But when I returned to my home this week, the rage made sense to me. There were no more Mr. Shields — the older black men were gone.

I asked 28-year-old Zachary Lewis about the absence of older men. …

“There ain’t no more ‘Old Heads’ anymore, where you been? They got big numbers or they in pine boxes.” In street syntax, that meant long prison sentences or death. …

As I walked through my old streets, it was filled with nothing but black young women, children and teenage boys. It was as if an alien spaceship had come in the night and spirited all the older black men away.

END_OF_DOCUMENT_TOKEN_TO_BE_REPLACED

Free Speech Rights for Some, but Not All?

These are Americans exercising their right to free speech, according to progressives and the media: 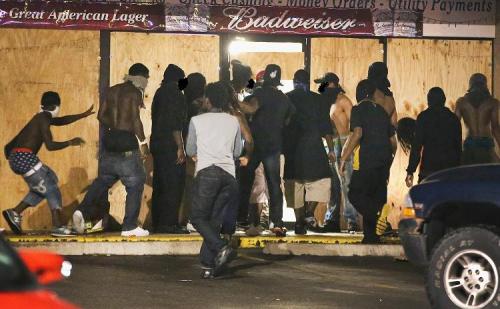 The Ferguson and the St. Louis County police departments, the MO Highway Patrol, the MO governor, virtually all the authorities in MO, as well as Barack Obama and Eric Holder, went out of their way to call these mobs “peaceful protesters” and to school law enforcement officers to take care not to infringe upon the First Amendment rights of these “protesters.”

END_OF_DOCUMENT_TOKEN_TO_BE_REPLACED

Under ordinary circumstances, the mainstream media would be profuse with their mea culpas over this fiasco; but these are not ordinary times: [emphasis added to quotes]

One of the most frequently quoted and photographed Ferguson protesters was charged Saturday with setting fire to a Berkeley convenience store last week.

St. Louis County police arrested Joshua Williams, 19, of St. Louis, on Friday after several local media outlets and store surveillance captured images of him trying to set a pile of wood on fire outside the QuikTrip on North Hanley Road early Wednesday.

Williams confessed to setting fires at the store in a videotaped interview, according to court documents. …

END_OF_DOCUMENT_TOKEN_TO_BE_REPLACED 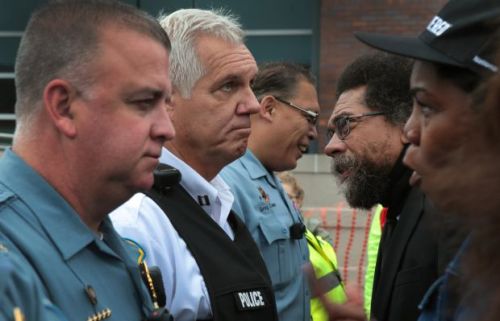 Philosopher Cornel West (second from right) joins members of the clergy as they minister to Ferguson police in front of the Ferguson Police Department on Monday, Oct. 13, 2014.

… as they minister to Ferguson police …

Members of the clergy got in the faces of law enforcement officers and offered opportunities for them to do penance. Amazing restraint was demonstrated by these police officers, who were forced to stand there and take this outrageous abuse:

The biggest [demonstration that day] took place outside the Ferguson police station, where about 500 people stood in heavy rain to chant and cheer 100 clergy members who offered themselves for arrest. About a dozen ministers walked toward a police line as a man on a bullhorn said they were offering to hear the confessions of police officers.

END_OF_DOCUMENT_TOKEN_TO_BE_REPLACED

The Spiral of Silence and Conversations about Race

In our last two posts we examined how political correctness can pressure individuals to self-censor their speech, whether in person or on the Internet, out of fear of ridicule, ostracism, or actual punishment by the enforcers of politically correct “right think”. This tendency to not speak out has been dubbed the spiral of silence. We looked at the cases of two police officers who lost their jobs, in the aftermath of the Michael Brown shooting in Ferguson, MO, because of comments they had made.

After Ferguson, once again we’re hearing cries for a “conversation about race.” A truly productive conversation is not going to happen in the current atmosphere, in light of the spiral of silence. Why not? Because political correctness poisons the well. Any comment perceived to be politically incorrect, in this context, will immediately result in accusations of racism. How, then, can there be any real dialogue?

END_OF_DOCUMENT_TOKEN_TO_BE_REPLACED

The Spiral of Silence and the Enforcers of Right Think

In our last post, we learned that researchers have found that people tend to self-censor their speech, both in person and on social media, if they believe that their opinions are unpopular or in the minority. Researchers call this phenomenon the spiral of silence. The tendency to self-censor is one that others, particularly progressives, use to political advantage, when they seek to punish or destroy those with whom they disagree. Depending upon how politically incorrect their points of view are perceived to be by others, speakers quickly learn to self-censor their speech lest they find themselves singled out, investigated, and punished by the enforcers of right think. Let’s look at some recent examples of this type of punishment that goes far beyond ridicule or ostracism.