Brown to Illegals: “You’re All Welcome in California!” USA Is the “Other Mexico,” Says Mexican President 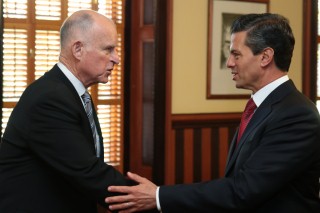 Recently, Governor Jerry Brown of California (CA) welcomed illegal aliens into his state. But just a few weeks ago, television network Univision released an interesting survey showing that, unlike what Democrats want us to believe, “Latinos” in CA are very much like the rest of America. First what Brown and the president of Mexico reportedly said: [emphasis added to quotes]

Mexican President Enrique Peña Nieto kicked off a two-day tour of California with a speech to Mexican immigrants in Los Angeles on Monday [8/25/14] in which he pledged to make life better for his countrymen living on both sides of the border.

“This is the other Mexico,” he said of the United States, which is home to an estimated 11 million Mexican immigrants. [Isn’t that the figure for illegal aliens?] …

Brown spoke about the interwoven histories of Mexico and California and nodded to the immigrants in the room, saying it didn’t matter whether they had permission to be in the United States.

“You’re all welcome in California,” he said.