Many all over the world have wondered recently who truly runs the United States of America. The question seems to have been answered over Easter weekend, when BOTUS (Bunny of the United States) made its (his/her/their?) first appearance at the presidential lectern to address the nation.

We’ve not yet found a transcript of BOTUS’s address, which may be because BOTUS seems to be mute. 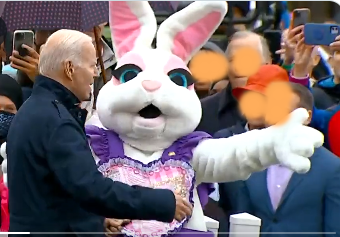 BOTUS also made an appearance at the White House Easter Egg Roll, where he/she/they helpfully and quickly directed the apparently former POTUS away from nosy (alleged) journalists.

It’s difficult to write about BOTUS, because his/her/their spokesperson hasn’t yet provided appropriate pronouns for him/her/them. We can’t allow stereotypes to cause us to misgender BOTUS. Because BOTUS wore a purple pinafore with a frilly lace-edged heart, and also wore a blue vest, we can’t decide and won’t risk assigning an incorrect gender. If only BOTUS would say, but of course BOTUS, being mute, can’t. (Oh, my. Is “mute” the proper term?)

Here’s BOTUS with spokesperson, considerately wearing a face mask while meeting and greeting the admiring public. Can bunnies transmit COVID?

We’re waiting anxiously to see what executive orders BOTUS might publish, now that he/she/they have a phone and a pen, although the phone will likely be used only for texting, provided BOTUS can text with those larger-than-human fingers.

Perhaps Big Tech can help, when they’re not too busy spying on Americans.

From Biden to BOTUS. How much worse can BOTUS be?

We wait with bated breath to see how the Global Community reacts to the Bunny of the United States.

Will they welcome or will they reject the first Leporid President of the United States?