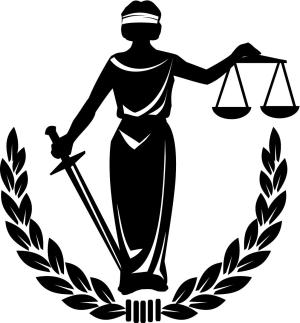 Woke warriors are protesting the jury verdict in the Kyle Rittenhouse case, as are various elected officials.

Here are some post-verdict statements by Democrat officials from MO, for example:

The truth is some of us are aware that the system is guilty as hell and is designed to work for a select few. (MO Rep. Rasheen Aldridge)

The truth is some of us are aware that the system is guilty as hell and is designed to work for a select few. (St. Louis MO mayor Tishaura Jones)

Many Democrats state that President Trump represented the “gravest threat to American democracy,” for questioning the results of the 2020 election (something he had a right to do and for which there’s a legal process delineated). Trump, they claimed, was threatening the “legitimacy” of the electoral process by objecting to the apparent illegitimacy of many state electoral vote results, a skepticism many citizens share.

Each of the elected officials quoted above, and many more, are questioning the legitimacy of our jury system, as well as fundamental principles of our justice system such as innocent until proven guilty, due process (not mob justice) and equal justice before the law. Are they not, then, representing a grave “threat to American democracy?” Hypocrites!

At a recent “protest” of the jury’s verdict, it was reported that

Bishop Tavis Grant, national field director for Rainbow PUSH, spoke at the protest to a crowd of about 100.

“It is wrong in a land of laws for any individual to shoot three people and kill two of them in a peaceful protest where people are exercising their First Amendment right of freedom of speech and the right to publicly protest in peace,” he said.

Below are photographs of the three individuals shot by Kyle Rittenhouse, as he was being attacked by each of them. Since Kyle Rittenhouse has been falsely labeled by the left as a vigilante, I labeled him as such, sarcastically. The photos show that he was anything but a vigilante. 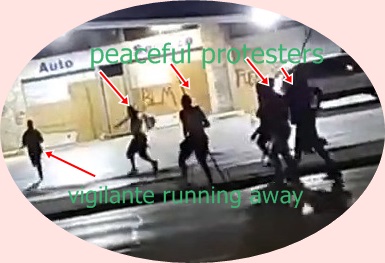 Above is a photo of Joseph Rosenbaum and individuals armed with various items chasing Kyle Rittenhouse.  Rosenbaum is first in line, seen throwing an object at Rittenhouse. Testimony from witnesses and video evidence showed that shortly afterwards, Rittenhouse became trapped between parked cars, where Rosenbaum caught up with and cornered him, lunged at him, and grabbed his rifle in an attempt to take it from him. Does Rosenbaum look like a person “exercising” his rights of “free speech” and to “publicly protest in peace?”

Above is a photo of Anthony Huber striking Kyle Rittenhouse violently in the head and neck with a skateboard, after Rittenhouse fell to the ground as he was being chased by the mob. Does Huber look like a person “exercising” his rights of “free speech” and to “publicly protest in peace?”

Above is a photo of Gaige Grosskreutz pointing a gun in the face of Kyle Rittenhouse (not shown; see here for full photo), who was lying stunned on the ground after being attacked by members of the mob. Does Grosskreutz look like a person “exercising” his rights of “free speech” and to “publicly protest in peace?”

The Democrats and other radical progressives seem to despise our system of justice and want to change it by creating a new definition for blind justice: a system where one is blind to the evidence, based upon preexisting bias towards the person on trial.

How could any intellectually honest person look at just these three images from the many images and videos presented at trial and not come away with the conviction that Rittenhouse acted in self defense?

Similarly, how could any intellectually honest person look at those people chasing and attacking Rittenhouse and describe them as peaceful protesters exercising their constitutional rights?

Let us take a moment this Thursday to give thanks for the brave and honest members of that jury in Wisconsin, who delivered a just verdict in this case, despite the threats against them.

79 responses to “Blind to Justice”