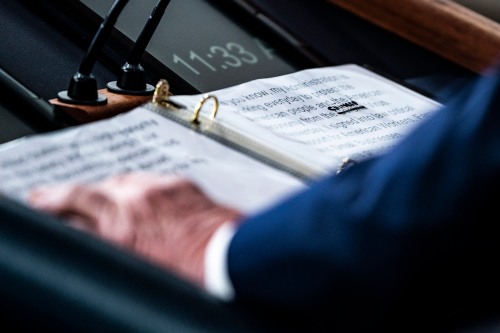 Someone got a snap of President Trump’s notes from a recent press conference discussing the Chinese Coronavirus Pandemic. During the past few pressers, the President has been plagued by idiots in the White House press corps grilling and excoriating him because he says the pandemic is caused by a “Chinese virus.”

This, they say, is racist, offensive to Chinese-Americans, encourages  xenophobia and “puts Asian-Americans at risk.”

They continue to berate President Trump, despite the fact that they themselves for months have called the virus either the Wuhan coronavirus or the Chinese coronavirus! See this link for a montage.

While they were referring to the virus as the Wuhan or Chinese virus, nobody brought a charge of racism against them or claimed that using such terminology amounted to a dog whistle for bigots and racists. I wonder why?

Below is a list of diseases that I compiled today, with the approximate dates they were first recognized. All of these diseases were named after geographical locations. You may recognize some or all of them. You may even have, like me, suffered through some of them.

Texas, Massachusetts, Perth, Michigan, California, Brisbane, Phuket, Switzerland, Japanese, Aussie, Shanghai are other types of influenza that were given geographical names, which are still in use.

It’s likely that I haven’t found all of the various diseases that afflict human beings and which were named for geographical locations, but these instances are enough to prove that it’s a long-standing practice to name novel viruses or new epidemics of previously known viruses after the area of the world where they first appeared or were first identified.

There is nothing racist about it.

Places are not races.

Something doesn’t instantly become racist, after having been done by others for centuries, simply because President Trump does it now.

The Wuhan China Coronavirus is plaguing us enough already. We don’t need an additional plague of stupidity, spite, and divisiveness.

36 responses to “The Wuhan/Chinese Virus”