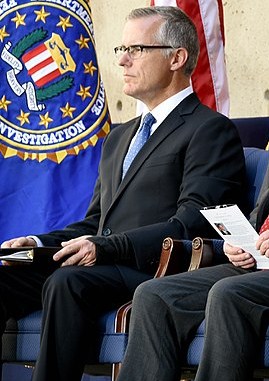 Promoting a book, disgraced and fired former FBI Deputy Director Andrew McCabe is giving interviews to friendly television journalists, in which he admits to instigating both a criminal as well as a counterintelligence investigation targeting President Donald J. Trump. Amazingly, McCabe provides no facts or evidence, no probable cause, to investigate a sitting president. Instead, McCabe appears to have bought into a ridiculous conspiracy theory, suspecting that President Trump was a Manchurian candidate, a puppet of Russian President Vladimir Putin.

McCabe admitted in interviews that he was privy to conversations in which Deputy Attorney General Rod Rosenstein offered, more than once, to wear a wire and record President Trump’s conversations in the White House, in order to gather evidence that the president is unfit to carry out his duties or, alternately, to prove he’s a puppet of the Russians.

Andrew McCarthy sums it up well:

No one was in a joking mood when these discussions took place. McCabe was in the midst of formally opening a criminal investigation of the president, and Rosenstein was handwringing over the possible appointment of a special counsel.

McCabe and the FBI’s leadership had been trying to make a criminal case against Trump for months, and McCabe thought – wrongly – that the firing of Comey might be a sound legal basis for an obstruction prosecution. …

Right after he fired Comey, Trump intensified the controversy by rebuking the former director in a White House meeting with Russian diplomats.

Rosenstein and McCabe both concluded that the president was either unhinged or had possibly removed Comey in order to derail the Russia investigation (notwithstanding McCabe’s Senate testimony, right after Comey’s firing, that “There has been no effort to impede our investigation to date”).

That is why the two men talked about “wiring up” against Trump – i.e., having someone covertly record him. This was neither idle talk nor dark humor. It was a logical aspect of their 25th Amendment brainstorming.

If you’re going to convince people that the president is unfit, you need evidence of his unfitness. McCabe and Rosenstein were clearly considering whether they could secretly capture Trump saying things that were incriminating or crazy (or both). They could then use such recordings to try to convince top administration officials that the president needed to go. …

It is understandable that the deputy attorney general wishes he hadn’t talked about removing the president. Legally, it was a harebrained idea. As a matter of civics – unelected bureaucrats brainstorming about how to reverse a democratic election – it was remarkably arrogant. But it happened, nonetheless.

Arrogant? I could think of a much better and more appropriate word.

Interestingly enough, a new poll demonstrates that more and more Americans are finally coming to the realization that over the past few years the “Deep State” has indeed been conducting a witch hunt against the president and hoping to pull off a bloodless coup, in order to eliminate President Trump from office before all the Deep State mendacity is revealed in full.

A story about the Rasmussen poll reports that

more voters than ever think it is likely a crime was committed against President Trump, and want a special prosecutor to investigate the investigators.

Fifty-six percent (56%) of likely voters believe senior officials at the Justice Department (DOJ) likely broke the law planning to oust the president, including 36% who say it is very likely and another 20% who say it is at least somewhat likely. …

The 25th Amendment was meant to answer a series of questions raised by the original U.S. Constitution’s treatment of presidential and vice-presidential vacancies, and presidential disability.

It was not meant to remove a president with whom the federal bureaucracy disagrees. Text and email messages show top officials at the Federal Bureau of Investigation (FBI) and DOJ wanted an “insurance policy” for themselves in the event Donald J. Trump won the 2016 presidential election.

So McCabe’s propaganda, disguised as a book tour, isn’t having the rehabilitative effect that he apparently expected, despite the friendliness of the journalists who interview him.

Some in the media are now trying to convince the public that McCabe, Rosenstein, et al, are patriots, not potentially treasonous conspirators, because, after all, anybody can see that the president is indeed unhinged and/or maybe a Russian puppet.

Rod Rosenstein was not Attorney General, nor a member of the cabinet, and Andrew McCabe was only deputy director of the FBI. Neither unelected bureaucrat had the Constitutional authority to determine, all on his own, that the duly elected president of the United States was unfit for the job that over 60 million people had just elected him to do. Nevertheless, they set out to gather “evidence” to support their crazed partisan conspiracy theory.

Let us hope and pray that newly installed Attorney General William Barr will drain the Deep State swamp and put an end to this injustice perpetrated against the President of the United States and all who supported him.  Let President Trump do his job, unencumbered.

192 responses to “Crazy or Compromised”