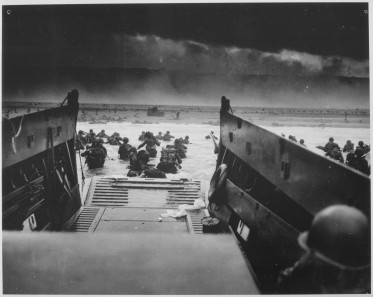 Let’s never forget the sacrifices made by the Greatest Generation on D-Day, when brave heroes stormed the beaches of Normandy so that the world would be free from tyranny.

It’s amazing to think how most of the heroes were in their early 20s. In this 21st century, they would be defined as “children.”

Think back to what you were doing when you were 21, and then remember what these selfless heroes did.

Let’s hope that we as a people never forget how our freedom was bought that day on the beaches of Normandy.

If only our European allies would better remember who secured their freedom from the horrors of Hitler’s National Socialist German Workers’ Party,  and at what price

On June 6, 1944, more than 160,000 Allied troops landed along a 50-mile stretch of heavily-fortified French coastline, to fight Nazi Germany on the beaches of Normandy, France. Gen. Dwight D. Eisenhower called the operation a crusade in which, “we will accept nothing less than full victory.” More than 5,000 Ships and 13,000 aircraft supported the D-Day invasion, and by day’s end, the Allies gained a foot-hold in Continental Europe. The cost in lives on D-Day was high. More than 9,000 Allied Soldiers were killed or wounded, but their sacrifice allowed more than 100,000 Soldiers to begin the slow, hard slog across Europe, to defeat Adolf Hitler’s crack troops.

May we never forget them.

This entry was posted in Open Threads, Remembrance and tagged D-Day 2018, open thread. Bookmark the permalink.