Will Crossfire Hurricane Be the Deep State’s Katrina? 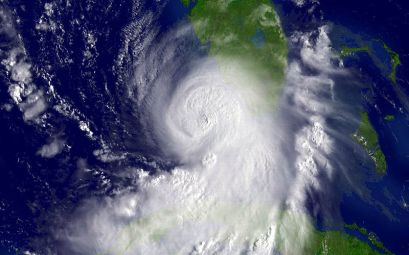 By now any thinking person has learned the truth: That President Trump was absolutely correct when he said that the Obama administration was spying on him and his campaign. Now that the OIG report is due very soon, the Deep State media’s usual suspects are spinning as hard as they can in an attempt to obfuscate as much as possible and to ameliorate the upcoming damage to Obama’s legacy (if not worse, like indictments).

Yes, indeedy. Not only did the Deep State spy on a presidential candidate within 100 days of the election, but they also even gave their spy gambit a name: Crossfire Hurricane.

Apparently agent Peter Strzok was instrumental in coming up with that too-clever name, according to text messages between Strzok and his “lover.”  Who’s caught in the crossfire now?

The head of Fusion GPS admitted the presence of these spies within the Trump campaign, but he quickly backpedaled with a lame alternate explanation that his source was probably mistaken or he misunderstood. Too late. The cat’s out of the bag. We don’t believe his hurricane-like spin.

Chickens will soon come home to roost. Or so we hope and pray, else we’re in worse trouble than we imagine.

Interesting how the usual suspects in the Deep State media knew when to begin their spin. That would be no sooner than the OIG’s draft report was sent to those who must not leak. Hmm. (Well, it’s not as if laws apply equally to everyone, including Deep State leakers and complicit Congress people.)

Let’s share a bit from a Gateway Pundit article, for a little background: [some emphasis added]

Jeff Carlson at theMarketswork … determined that George Papadopoulos, the lower level campaign worker for the Trump campaign, appears to have been targeted by three individuals with ties to British and/or U.S. Intelligence: Joseph Mifsud, Alexander Downer and Stefan Halper.

Mifsud and Papadopoulos obtained positions at an organization named the Centre for International Energy and Natural Resources Law & Security. Papadopoulos was a nobody and the Centre sketchy at best. Mifsud vanished in early November 2017, shortly after Papadopoulos was in the news and indicted. His whereabouts are still unknown. …

Alexander Downer is the Australian individual who apparently overheard Papadopooulos talk about Trump and Russia in a bar which alerted the FBI to the story and their eventual spy program on Trump. This story has been refuted for months. Carlson writes – “The Papadopoulos/Downer meeting has been portrayed as a chance encounter in a bar. That does not appear to be the case….”

Shortly after the Papadopoulos and Downer chance encounter, Peter Strzok was in London per texts released by the FBI. “Strzok texts suggest he was in London on August 3, 2016.” The corrupt FBI’s investigation into Trump officially started a few days earlier.

The Downer/Papadopoulos meeting indeed was portrayed as a chance encounter, but now it appears otherwise. The usual suspects in the Deep State media, however, actually very oddly telegraphed the truth in a story from last December about the origination of the “Russia Inquiry,” but one has to read carefully. Spidey senses immediately tingled upon reading this:

Not long after, however, he [Papadopoulos] opened up to Mr. Downer, the Australian diplomat, about his contacts with the Russians. It is unclear whether Mr. Downer was fishing for that information that night in May 2016.

Now why would these usually compliant, if not complicit, Deep State reporters question Downer’s motivations, unless they already knew that he was fishing for information, and why?

Set up like a bowling pin? Mifsud feeds the information to Papadopoulos, and then Downer moves in to receive it back from him, and the rest is history.

Smell a rat? Or a spy? Several?

Let all the poisons that lurk in the mud, hatch out.

We the People are tired of waiting for the truth. Drain the swamp, Mr. President.

103 responses to “Will Crossfire Hurricane Be the Deep State’s Katrina?”