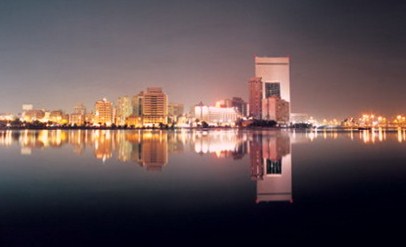 Apparently the arrested ones are being kept in style in a posh 5-star hotel in Riyadh. Prince Alwaleed bin Talal is an interesting character.

Prince Alwaleed was giving interviews to the Western news media as recently as late last month about subjects like so-called crypto currencies and Saudi Arabia’s plans for a public offering of shares in its state oil company, Aramco.

[I]n a twitter message in 2015 the prince called Mr. Trump “a disgrace not only to the GOP but to all America.” …

Mr. Trump fired back, also on Twitter, that “Dopey Prince … wants to control our U.S. politicians with daddy’s money.” …

Before sparring with Mr. Trump, Prince Alwaleed was publicly rebuffed by Mayor Rudolph W. Giuliani, who rejected his $10 million donation for the victims of the Sept. 11 terrorist attacks in New York because the prince had also criticized American foreign policy. …

In 2015 he pledged to donate his fortune of $32 billion to charity after his death. It was unclear Saturday whether Saudi Arabia’s corruption committee might seek to confiscate any of his assets.

Prince Alwaleed would probably take issue with President Trump’s characterization of his wealth being “daddy’s money.”

The prince says he is a self-made billionaire, claiming that his father only gave him a $30,000 endowment and a $300,000 loan and a house. It remains unclear how he was subsequently able to amass such a huge amount of money in a short time.

His first investments were in construction and it was not until 1991, when he rescued the then fragile Citicorp, that the west came to know of his financial firepower. He has since come to the rescue of many other big companies and his wealth has grown at a startling rate, now stretching to a super yacht (which became the setting for a James Bond film and was once owned by Donald Trump), private jets (an A380 he later sold), countless acres of lands, and hotel giants Four Seasons and Mövenpick.

His Rotana group is the Arab world’s largest entertainment company. His Kingdom resort outside Riyadh has a private zoo and an underground cavern, according to Vanity Fair. He is the chairman of Kingdom Holding, which controls many of his assets.

The Four Seasons hotel in Las Vegas was recently in the news, when Stephen Paddock allegedly killed 58 country music concert attendees, while causing injury to 546 others, by shooting from windows of a suite on the 32th floor of the Mandalay Bay hotel, which is situated in the same building as the Four Seasons, the latter hotel occupying the top four floors of the high-rise.

ISIS claimed responsibility for the terrorist attack, stating that Paddock was one of their converts. Authorities, however, deny their claim. Yet Paddock had visited Muslim countries, such as the United Arab Emirates and Jordan, during as many as 20 cruises he took after he got a passport in 2010. Paddock had been to the Middle East within the year prior to the shooting in Las Vegas.

Paddock smuggled quite an arsenal into his suite–far more guns than any one person could or likely would use for the type of assault Paddock had planned, some say.

There were 23 rifles and one handgun found inside his room by the police afterwards, including four DDM4 rifles, three FN-15 rifles, one AR-15 rifle with forward front grip, one .308-caliber AR-10 battle rifle, one AK-47, and at least one made-to-order LMT rifle, all very expensive, according to a law enforcement source. His arsenal included a large quantity of ammunition in special high capacity magazines, holding up to 75, or up to 100 cartridges each. Two of the rifles were resting on bipods, and were equipped with high-tech telescopic sights. Twelve of the weapons were outfitted with bump fire stocks, a recently-available firearms accessory that allows semiautomatic rifles to fire rapidly, simulating fully-automatic gunfire.

Besides the weapons in the hotel room, Paddock also had 50 (or 90) pounds of explosives and two suitcases full of ammunition in his car, which was parked in the hotel garage.

Some speculate that Paddock may have been selling these weapons to unidentified persons, that he had the help of another shooter or shooters, or that he was a victim of a gun sale “gone wrong,” when those he thought were buyers turned their weapons against him, perpetrated the assault on the concert, and then left the dead Paddock to take the blame.

Prince al-Waleed hasn’t been charged, but could face allegations of money laundering and illegal arms sales, people familiar with the matter said. …

Prince al-Waleed has been a familiar figure in Western business and financial circles for more than a quarter of a century, having backed iconic US companies such as General Motors, Apple and Citigroup. More recently, the prince has invested heavily in young technology companies including Twitter and Lyft.

One of the prince’s most high-profile partnerships is with Microsoft co-founder Bill Gates. The investment firms of the two billionaires teamed up a decade ago to take luxury hotel operator Four Seasons Holdings private for $US3.8 billion. …

The prince has also been a long-time investor in Rupert Murdoch’s media empire, first in News Corp in 1997 and eventually becoming the second-largest holder of voting shares outside of the Murdoch family. … [H]e sold the bulk of his stake in News Corp, which owns The Wall Street Journal and The Australian. He is also no longer a major shareholder in Fox.

So far, none of the stories explain why Prince Alwaleed would be suspected of illegal gun sales.

According to Pam Geller, this prince has troubling connections to the Muslim Brotherhood and CAIR. His pledge to donate his fortune to charity, upon his death, entails furthering a personal goal of promoting Islamism.

Saudi Prince Alwaleed bin Talal, a senior member of the Saudi monarchy, says he’ll pledge his $32 billion to advance the islamization of America. This is a MOAB (mother of all bombs) in the information battle-space. …

The Saudis have spent billions already. 80% of the mosques  build in America are Saudi funded. Islamic groups working to impose the sharia are largely funded by the Saudis.

Indeed, the “Arab Bill Gates” has a far different concept of charity than do most billionaires:

Published reports and books reveal Alwaleed already has pledged millions to radical Muslim Brotherhood front groups that have a secret plan to Islamize America and spread Shariah law throughout the West. These pro-jihad groups can now count on a massive and virtually endless infusion of cash to their war chests.

Alwaleed has extensive ties to Brotherhood leaders. For example, he tapped “tele-Islamist” Tariq Al-Suwaidan, widely reported to be a leader of the Muslim Brotherhood in Kuwait, as the channel director of his Islamic religious TV outlet Al Risala.

Alwaleed donated a whopping $27 million to a Saudi telethon for the violent Palestinian intifada against Israel, according to the Clarion Project.

Also in 2002, he gave $500,000 to the Washington-based Council on American-Islamic Relations, which federal authorities have linked to the Muslim Brotherhood and Hamas.

Maybe. Maybe not. It depends upon what happens now to his fortune. More comprehensive information about this Saudi prince, including the infamous accusation that he sanctioned “dwarf tossing,” can be found here, here, and here.

It’s probably no surprise to find President Trump on the opposite side of political issues from Prince Alwaleed. The prince is also connected, if only tangentially, to the curious and still hazy life history of our previous president:

And then there’s the matter of how did Barack Obama gain entry into, and afford, Harvard Law School?  Mr. John O Brennan [former CIA head under Obama] spent most of his C.I.A. career as an analyst, but during the 1990s served a tour as the chief of the station in Saudi Arabia.

[…]  In late March 2008, a former Manhattan Borough president Percy Sutton told a New York cable channel that a former business partner who was “raising money” for Obama had approached him in 1988 to help Obama get into Harvard Law School.

In this video interview, Sutton says he first heard of Obama about twenty years ago from Khalid Al-Mansour, who Sutton described as advisor to “one of the world’s richest men,” Saudi prince Alwaleed bin Talal.  …

As Sutton remembered, Al-Mansour was raising money for Obama’s education and seeking recommendations for him to attend Harvard Law School. …

Apparently, al-Mansour serves on the Board of, among others, Saudi African Bank and was responsible for the Africa investment activities of Kingdom Holdings, Saudi Prince Al-Waleed bin Talal’s investment company.

We’ve been interested in Prince Alwaleed for a while. More information about his connections to, among others Hillary Clinton’s good friend Huma Abedin and her family, can be found here and here.

President Trump’s son-in-law and advisor Jared Kushner made an under-the-radar trip to Saudi Arabia recently. One has to wonder if this anti-corruption purge was among the topics of discussion. Swamp draining going on in Saudi Arabia? Let’s hope and pray that President Trump is as successful in his own anti-corruption campaign. We the People would certainly like to see a similar number of “current and former” officials arrested and charged for corruption in these United States.

83 responses to “Connections of a Saudi Prince”