A message to the NFL:

Video by Dean Brown at YouTube.  Thank you, Dean. This song by Merle Haggard couldn’t be more appropriate background music for fan reaction to this week’s NFL National Anthem fiasco.

Now comes news that the Green Bay Packers had a new plan for their game last night. They expected fans to stand with arms linked with neighboring fans during the National Anthem, as the players themselves planned to do (instead of kneeling in disrespect for flag and country).

Maybe I’ve had too much caffeine on National Coffee Day, but I’m sorry. We already have, and have had for decades, a tradition about how one is supposed to behave during the playing of the anthem.

What gives these PC social justice warriors the right to decide for everybody else that this nation is going to change that tradition for this new one they’ve just invented, in order to try to assuage the righteous anger of the nation they disrespected by politicizing their sport in the first place?

The NFL already has rules about how all players should behave during the anthem, and it doesn’t include linking arms in any phony show of “unity.”

What does their version of unity mean other than to try to draft everyone else, including the fans, into a show of “unity” against our president? (And for Black Lives Matter?)

Here are the NFL rules about how to honor the flag during the anthem:

During the National Anthem, players on the field and bench area should stand at attention, face the flag, hold helmets in their left hand, and refrain from talking. The home team should ensure that the American flag is in good condition. It should be pointed out to players and coaches that we continue to be judged by the public in this area of respect for the flag and our country. Failure to be on the field by the start of the National Anthem may result in discipline, such as fines, suspensions, and/or the forfeiture of draft choice(s) for violations of the above, including first offenses.

According to their own rules, players who’ve knelt during the anthem should have already been fined and made to stand respectfully at attention. Ditto for all players who recently avoided the anthem altogether by staying in the locker room like cowards.

Introducing this “linking of arms” to the proper, traditional behavior remains, in my opinion, an attempt to introduce other messages, political messages, into what should be a simple expression of honor and gratitude for our country and for those who have fought and/or given their lives to keep us free.

We show unity already, when all players and fans stand together at attention to honor our flag, which represents all of us–the entire nation, united under God, indivisible.

This is akin to how Barack Obama tried to change the meaning and the symbolism of President Bush’s declared National Day of Prayer and Remembrance for the Victims of the Terrorist Attacks on September 11, 2001 (aka Patriot’s Day) into something else altogether by declaring his own National Day of Service and Remembrance, omitting references to prayer and terrorism.

So now the NFL has tried to take the onus off the players, whom the coaches believe shouldn’t have to “choose” whether to kneel or stand during the anthem, and tried instead to transfer the onus onto the fans, making the fans choose whether to honor the flag in the traditional manner or be shamed into the virtue-signaling political act of linking arms in a show of unity against Trump.  “Comply, or be seen as someone who’s against unity.”

No doubt about it. They believe that President Trump started this controversy, when nothing could be further from the truth. Without doubt this controversy is divisive. But who divided us? The players who decided to introduce politics into the playing of our anthem, and their bosses who allowed them to do so, against their own rules.

Their attempt to change tradition is offensive. It’s not buying the NFL any sympathy from anyone who can read their signals.

What’s so hard about the NFL enforcing their own rules?

Why is it so hard for them to tell their spoiled brat employees that their “free speech” doesn’t extend to disrespecting the flag, the fans, fellow players who do respect the flag and country, and the entire nation, including its duly elected president?

The NFL chose to side with their snowflakes because they feared … what? To be called racists? Bigots? Privileged white men?

Well, people reap what they sow. There’s no undoing the choice the NFL has already made.

Anyway, Happy National Coffee Day. And have a good weekend. 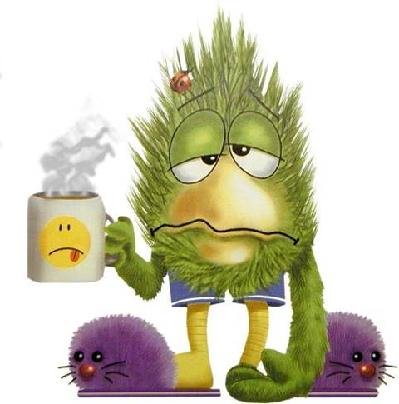