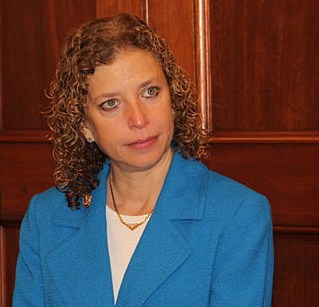 There’s a break in the Awan Scandal. What’s that you say? You never heard of the Awan Scandal? That’s no surprise, because it involves Democrats, whom the media bend themselves into pretzels to avoid exposing to due scrutiny.

Imran Awan was arrested at Dulles airport by the FBI, going on the lam, exiting the country, stage left (or right, depending upon his ultimate destination, which was probably his native Pakistan).

Florida GOP Rep. Debbie Wasserman Schultz’s right-hand information technology (IT) aide was arrested attempting to leave the country just a few hours after The Daily Caller News Foundation’s Investigative Group revealed that he is the target of an FBI investigation.

Imran Awan, a Pakistani-born IT aide, had access to all emails and files of dozens of members of Congress, as well as the password to the iPad that Wasserman Schultz used for Democratic National Committee business before she resigned as its head in July 2016. He was apprehended while attempting to flee the U.S., Fox News first reported. …

He’s been charged with one count of bank fraud, but it would be no surprise to learn at a later date that there are other charges pending.

With luck, he’ll turn state’s evidence and open up that proverbial Pandora’s Box of truth. He’s out of jail, but fitted with a GPS monitor.

Let’s hope he’ll soon be singing like a nightingale.

Maybe we’ll learn who really “hacked” the DNC emails. There’s a lot of backstory to catch up with, if you’re unaware of the Awan Scandal. Much of it is quite ominous.

Many questions asked and unanswered. We look forward to learning the answers.

Five members of a Pakistani family under criminal investigation for allegedly misusing their positions as computer administrators for dozens of Democrats in the House of Representatives were paid at least $4 million from July 2009 to the present, The Daily Caller News Foundation’s Investigative Group has learned.

Evidence suggests some of the dozens of House Democrats — many of whom serve on the intelligence, homeland security and foreign affairs committees — who employed the suspects were inexplicably paying people they rarely or never saw. …

The suspects had full access to the emails and office computer files of the members for whom they worked.  A focus of the investigation by the U.S. Capitol Police is an off-site server on which congressional data was allegedly loaded without the knowledge of authorities.

Even before Capitol Police told chiefs of staff for the employing Democrats Feb. 2 that the Awans — including brothers Imran, Abid and Jamal, and two of their wives, Hina Alvi and Natalia Sova — were suspects in a criminal theft and cybersecurity probe, there were multiple signs that something was amiss.

For example, four of the 500 highest-paid House staffers are suspects, according to TheDCNF’s analysis of payroll records. There are more than 15,000 congressional staff employees …

We demand that our government find and reveal the truth about this scandal and this extended family of native Pakistani Muslims who somehow got access to, among other items, the email of dozens of Democrat Congresspersons!

While the media and the Democrats blather on about the ridiculous notion that mysterious “Russians” could blackmail the President of the United States, using a laughable dossier of bogus opposition research, the very real possibility exists that this extended family of foreigners could very well be blackmailing any number of Democrat House members.

Comprehensive backstory also at this link. An excerpt:

These are the key elements of the case that make its so extraordinary and so potentially troubling:

The suspects were all banned from the House of Representatives computer network back in February when the investigation was announced. But, despite all the damning evidence that continues to accumulate, no one has been charged or arrested [until today]. It also appears that none of their passports has been confiscated.

One more significant fact: The stepmother of the Awan brothers had her home and communications bugged by the brothers during a family dispute. Did they also bug Congresspersons?