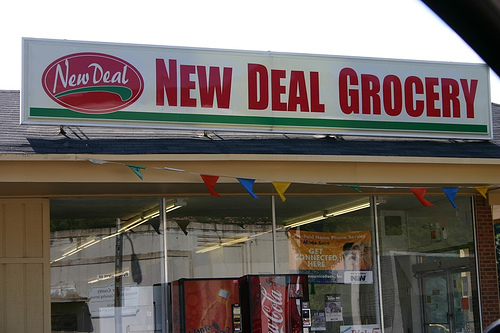 Imagine shopping at a hypothetical store of the future, where the price of any product is displayed via your cell phone app. The store doesn’t put a price tag on any item and there are no prices on the shelf displays. The convenient app does it all for you. But there’s a catch.

The app’s internal algorithm changes prices, based upon presumptions the software makes about who you are, your ability pay, and whether or not you’d be willing to pay whatever price the app chooses for you. In other words, the price of an item varies according to who you are!

The app has access to a huge database of personal information that third parties have collected about you over the years from so many sources–social media, financial institutions, government, public records, neighborhood demographics, etc. Using that information, the app automatically arrives at the price you’ll pay, based upon what the algorithm decides you ought to pay because of who you are. Let’s rephrase–it determines your price based upon your presumed societal privilege.

Such a system would be a social justice warrior’s (SJWs) dream:

And it’s all hidden away in the app. The app does its thing behind the scenes, not in any way transparently, and who’s the wiser?

Would you know that others pay a different price than you do for the same item or service? Would you care?

Is this the wave of the future? You may think it’s a ridiculous idea, because it’s certainly not fair, is it? Hardly the American Way. Sounds discriminatory, because, by definition, that’s exactly what it is.

Before you think something like this will never come to pass in the USA, consider this excerpt from an article about how Uber prices its rides in some cities. Small wonder they call this a “sharing economy.” [some emphasis added to quotes]

Uber applies machine-learning techniques to estimate how much groups of customers are willing to shell out for a ride, calculating riders’ propensity for paying a higher price for a particular route at a certain time of day, he said. For instance, someone traveling from a wealthy neighborhood to another tony spot might be asked to pay more than another person heading to a poorer part of town, even if demand, traffic and distance are the same. Uber calls this “route-based pricing.”

From each according to his ability …

Now, you might not at first glance believe that this means what it seems to imply. Are they really saying that Uber bases its prices on the presumed wealth of customers traveling from one “wealthy neighborhood” to another? Yes, they are. Consider this social justice argument:

“Society is more willing to accept wealthy people paying higher fares,” said Chris Knittel, a business professor at the Massachusetts Institute of Technology. “But if the repercussion of lower fares in lower-income places is longer wait times, that’s probably what they want to keep an eye on.”

Notice that the esteemed professor seems to speak for “society” (when did we vote on this as a society?) and that he seems to have no concern for the fundamental unfairness of a system that, in effect, punishes some individuals because they’re presumed to be “wealthy.” He’s concerned that “lower-income” people might have longer wait times, even though they’re paying less. He seems to have no equivalent concern that maybe “they want to keep an eye on” gouging wealthy patrons simply because they’re wealthy!

Some reports have claimed that Uber is targeting wealthy riders and using machine learning to determine what they would be willing to pay. It’s also been suggested that high-demand routes is code for “travelling between wealthy areas”.

In a statement to Android Headlines, Uber ambiguously confirmed the allegation.

“We price routes differently based on our understanding of riders’ choices so we can serve more people in more places at fares they can afford,” it said.

But [Head of Product Daniel] Graf vehemently denied it.

“Absolutely not,” he told Bloomberg. “This is not personalized. This has nothing to do with the individual.”

No, apparently at this time it has nothing to do with individuals, per se; but it does seem to have much to do with groups that are presumed to be wealthier than other groups; and there seem to be no qualms expressed about the fundamental unfairness of trying to single out wealthy people for higher prices.

while Uber rides may at any point vary depending on the time of day, the mileage of the journey, and the number of drivers on call, the difference here is that when all of those factors are equal for two different riders, those riders might still be charged differently. One example given in the report is that a ride which sees point A (departure location) and point B (destination) both occurring in an area which is deemed (presumably by machine learning) to be more affluent, the cost will be higher, compared to a ride in a less-affluent area – which covers the exact same distance, with the exact same driver availability, and at the exact same time of the day. … The person is part of the equation, and in some respects, more integral than the distance in determining the price.

While this pricing system isn’t as individually focused as is my hypothetical store of the future, it certainly seems to be a step in that direction.

The busybodies of the Ctrl-left do so love to control everyone’s lives and impose their own values on all of  “society,” especially if they can find a way to embed their schemes secretly within obscure algorithms that few but coders and mathematicians can easily understand.

If “society” doesn’t know about such “black box” systems of unequal pricing, then how can society weigh in on them? Pity the poor Congresspersons whose job it ought to become to examine in detail this potentially “predatory pricing.”

Another thought experiment, especially for those SJWs who see nothing wrong with Uber’s pricing experiment: Suppose, for the sake of argument, that you’re a low-paid nanny (oh, let’s make you an “immigrant of color”) whose little charges live in a “wealthy neighborhood.” Suppose that you ordinarily take a bus home from work but one day you miss the last bus and so must call Uber for a ride to a “tony spot” where you happen to live in low-income, subsidized housing courtesy of  Obama’s hopefully soon defunct and equally redistributionist “spread the poor around” scheme (AFFH). Unless Uber somehow takes into account your individual circumstances, how will Uber’s app make an exception for you? Or will you have to pay the higher price for accidentally being caught up in their presumptuous “route based pricing?”

Uber drivers themselves are upset because of the non-transparent nature of the system, which in effect screws them out of what they consider to be their fair share of the fares. Mind you, drivers aren’t complaining about a system that charges presumed wealthier people more–they’re just complaining that “black box” pricing keeps them in the dark about how much they would make if they were also allowed to pick wealthy people’s pockets. Currently, the company keeps all those excess profits.

It’s bad enough that taxation is progressive. Are we also now going to be subject to progressive commerce, courtesy of the Ctrl-left? What they can’t get at the ballot box, they try to get nevertheless, by any means necessary.

Black-box-type software systems are currently being implemented more and more often by companies such as Google, Facebook, Twitter. They all have mysterious algorithms used to place ads, position stories on searches, identify posts to censor, and manipulate their “trending stories” feeds. Additionally, they all collect and maintain huge amounts of personal information about their users. None of this is transparent and most of it escapes any kind of government oversight. Social media entities are either vulnerable to manipulation by or actively coordinating with progressive forces that want to “fact check” and/or censor conservative thought, speech, and political activities. All going on behind the scenes. Excellent analyses can be found at this link.

Obviously, charging one group of customers more for the same product or service based upon group identity is discrimination. SJWs love to talk about disparate impact. Why, then, wouldn’t pricing based upon presumed ability to pay be race and/or sex discrimination (maybe even age discrimination), considering that Asian and white males are statistically more wealthy than other groups? Doesn’t this pricing scheme have a disparate impact on Asians, whites, and males? Isn’t that potentially a violation of their civil rights? (Uber, coincidentally, is itself fighting accusations of sex discrimination. Similarly, most of the tech companies in Silicon Valley, including  social media firms, have been accused of sex discrimination–something that’s not very difficult to discern, given their own demographics.)

Just the other day, the Supreme Court ruled against  the state of North Carolina in a case involving redistricting because the new district maps, it was argued, discriminate against blacks, even though political party was the main factor used to draw the districts. Because blacks overwhelming vote for Democrats, the judges ruled that, in essence, party is a proxy for race in this instance. North Carolina, progressive judges declared, engaged in unconstitutional racial gerrymandering, not the more mundane and constitutional partisan gerrymandering. (Our newest judge, Neil Gorsuch, wasn’t party to the decision.)

SJWs and progressives also like to yap about democracy and equality. How, then, is it fair, equal, democratic to charge one group of individuals more for the same product or service?

Are we Americans all equal under the law or not?

Will the New World Order, this Brave New World, mean that someday soon we’re all going to be labeled and then privileged or disadvantaged based upon the communist, socialist, redistributionist, or politically correct whims of those who write the algorithms that now control so many aspects of our lives?

To read more about Uber and the “sharing economy,” see this link, where you can download a pdf entitled The Taking Economy: Uber, Information, and Power.

Read this article and you might learn more about why some (mostly progressive) cities are so enthusiastic about Uber, which sometimes defies the laws of those very cities. (Hint: subsidized-by-taxpayers “semi-public” transit, courtesy of Uber and Lyft.)