Obstruction of an Investigation? 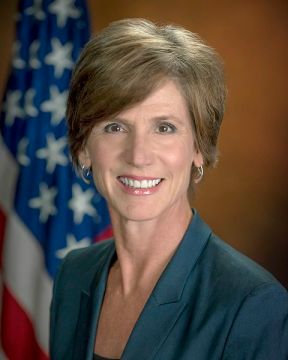 Ok, folks. Maybe I’m just dumb, which is why I don’t understand. Riddle me this: Why are the Democrats screaming that President Trump potentially obstructed justice and interfered in a counter-intelligence investigation because he had dinner soon after his inauguration with now-fired FBI director James Comey to discuss Comey staying on as FBI director? Potentially “a federal offense,” they gasp.

Their argument seems to be that President Trump had no business asking if he himself were under investigation during that dinner interview. The President says that Comey assured him thrice (once at the dinner and twice over the phone) that no, he’s not under investigation, probably because, as some convincingly argue, that would be grounds to dismiss Comey, given that the FBI isn’t authorized to investigate a sitting president. That’s the job of the House of Representatives.

In addition, the Democrats seem to believe that it’s improper for the president to be informed about the progress of a counterintelligence investigation or to ask about it. Remember that.

What I’d like to know–what really astounds me–how is it that Sally Yates is not being accused of obstructing the investigation? According to an excellent article at The Conservative Treehouse, Yates, acting attorney general, went to the White House to inform White House counsel Don McGahn about conversations that she had apparently been given access to–conversations intercepted by the NSA that involved Lt. Gen. Michael Flynn and the Russian ambassador. Flynn’s name, as we all know by now, was somehow “unmasked.” As a result, Yates knew who it was who was talking to the ambassador. From the story:

Sally Yates traveled to the White House along with a senior member of the DOJ’s National Security Division, Bill Priestap, who was overseeing the matter.  This was Yates’ first meeting with McGahn in his office, which also acts as a sensitive compartmented information facility (SCIF).

Yates said she began their meeting by laying out the media accounts and media statements made by Vice President Mike Pence and other high-ranking White House officials about General Flynn’s activity “that we knew not to be the truth.”

According to Sally Yates testimony, she and Bill Priestap reportedly presented all the information to McGahn so the White House could take action that they deemed appropriate.  When asked by McGahn if Flynn should be fired, Yates answered, “that really wasn’t our call.”

Yates also said her decision to notify the White House counsel had been discussed “at great length.”  According to her testimony: “Certainly leading up to our notification on the 26th, it was a topic of a whole lot of discussion in DOJ and with other members of the intel community.” …

Sally Yates returned to the White House late that afternoon.  One of McGahn’s topics discussed was whether Flynn could be prosecuted for his conduct.

Specifically, according to Yates, one of the questions McGahn asked Yates was, “Why does it matter to DOJ if one White House official lies to another?” She explained that it “was a whole lot more than that,” and reviewed the same issues outlined the prior day.

McGahn expressed his concern that taking action might interfere with the FBI investigation of Flynn, and Yates said it wouldn’t. “It wouldn’t really be fair of us to tell you this and then expect you to sit on your hands,” Yates had told McGahn.

McGahn asked if he could look at the underlying evidence of Flynn’s conduct, and she said they would work with the FBI over the weekend and “get back with him on Monday morning.” …

The way I see this, Yates was discussing this “sensitive” topic of a counterintelligence investigation not only with Priestap but also with others in the DOJ as well as in the intelligence community. All of these people were apprised of the investigation. Aware of it.  Discussing it.

However, somehow it’s supposed to be forbidden to tell the President or for him to ask about the status of the investigation, even though he himself is not under investigation.

Yates told McGahn basically what Flynn said in his ‘taped’ conversations and how they differed from what Vice President Pence understood Flynn to have discussed. Yates telegraphed to McGahn that they KNOW what Flynn really said. How? Obviously, she read transcripts or heard recordings of Flynn’s calls.

Had McGahn told President Trump about Flynn and at that point in time President Trump had fired Flynn, would the Democrats now be claiming that by firing him the President obstructed the investigation? Well, you can bet your boots that they would have.

But how is it that Yates was not interfering in the FBI’s counterintelligence investigation by telling the White House counsel about the investigation itself and detailing what had been found with regard to Flynn?

Keep in mind that all of these people work for President Trump. They are part of the executive branch. They all report, ultimately, to the President of the United States. They all know about this counterintelligence investigation, but the President can’t be trusted and must be kept in the dark, apparently.

The New York Times reported that Yates told McGahn about Flynn because the alleged misrepresentations he made to Vice President Pence might subject Flynn  to blackmail by the Russians. Yates et al. expected President Trump to fire Flynn, but he didn’t. Why should he have? The threat of blackmail would disappear once the President was apprised of the “truth.” About what would the Russians blackmail Flynn, once his boss already knew the truth–that Flynn misremembered vaguely referencing the sanctions in his discussions with the Russian ambassador?

154 responses to “Obstruction of an Investigation?”