Harper-Mercer: Mentally Ill or on a Mission? 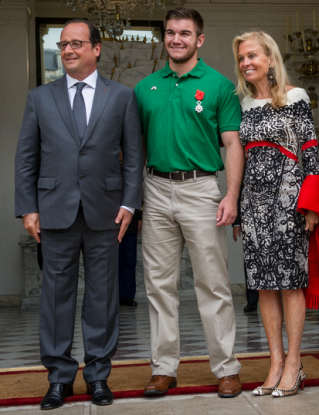 It seems apparent that we may never learn the whole truth about the recent murders in Oregon. The official narrative seems to be that the shooter, Christopher Mercer (aka Chris Harper-Mercer), was a mentally ill loser who somehow gathered a “legal” arsenal, carried a rifle and 5 handguns into Umpqua Community College without being seen or stopped, and systematically, within 10 minutes, murdered 9 fellow students–shooting one man 5 times (or 7 times) and one woman 10 times–and wounding 9. As usual, various scenarios are offered.

Early on, reporters and the governor of Oregon stated that the shooter was a 20-year-old who had traveled to Oregon from the Midwest, met someone or was supposed to meet someone in Seattle, and then attacked the school in Oregon. Later, the story changed: The shooter became a 26-year-old who lived in the area and was enrolled in that same community college class, yet nobody seems to have recognized him at the time, even though the class had met for 4 days already.

Some surviving victims reported that Mercer singled out Christians for murder. Others, later on, said that he singled out religious people, no matter their faith.

If he was a mentally ill loser who felt that he had no choice in life but to murder people because he didn’t have a girlfriend, then why would he care what religious faiths his victims held? (Apropos? Muslims are forbidden to kill other Muslims.)

One survivor’s mother tells us that her son was called “the lucky one” by the shooter, because her son was hand-picked to stand in the back of the room, watch the murders, and give to the police a package containing, among other things, a thumb drive with Mercer’s “manifesto” on it. So far, the manifesto hasn’t been given to the media or the public. What did Mercer’s manifesto say? Why isn’t it released, although other “manifestos” have been released?

(Why did ISIS claim credit? By the way, we aren’t told by the mainstream media that one of the only two friends Mercer had on his MySpace page admired jihadists.)

The media (preposterously) have variously described Mercer, who was born in England to an African-American mother and a white British father, as someone who was anti-black, a Satanist, with “white supremacy” leanings. Whether or not Mercer is an American citizen is yet to be revealed. A relative says he was born in the UK, while a news story says he was born in CA. However, there are reports that Mercer holds a British passport.

Mercer was also described as a “teetotaler” but this “fact” was derived from suspicious social media accounts that were modified after Mercer was dead. It’s important to note that Mercer’s name was withheld from the public for many hours, inexplicably so.

In the past, whenever shooters have been publicly identified, citizen researchers have immediately grabbed and screen-saved social media information posted by the shooters. By now, the powers that be have learned that this will happen, so they know that they must beat the public to the punch if they intend to control the narrative.

An interesting and not well reported fact: Alek Skarlatos–who, along with friends, recently and heroically intervened to stop a Muslim jihadist terror attack on a train in France–attended Umpqua Community College and had planned to attend this very semester, until he decided instead to become a contestant on Dancing with the Stars. So Skarlatos was not there, either to become a victim himself or to intervene to save yet more lives.

A British ISIS supporter has published the name and address of the Navy Seal who killed Osama bin Laden and called on American extremists to execute him.

Mirror Online has been monitoring jihadi chat on social media and has spotted several people linking to a text file containing instructions on how to find Robert O’Neill, who claimed to have killed the al Qaeda chief.

This information was shared by a British extremist claiming to be “Mrs Terror” Sally Jones, who dubbed O’Neill a “number one target” and called for his immediate death.

Remember the July 2015 shooting in Chattanooga?

Defense Secretary Ash Carter approved immediate steps taken by the military branches to increase security and has told the services to get back to him by the end of next week with additional force protection measures, Pentagon spokesman Peter Cook said in a statement on Friday.

The steps were taken just a day after a gunman attacked two military facilities in Chattanooga, leaving four Marines and one sailor dead. Suspected gunman Mohammad Youssef Abdulazeez was killed in the attacks on a joint-service recruiting station and a nearby Navy Operational Support Center.

Apparently, the powers that be have not yet decided whether Mohammad Youssef Abdulazeez was an ISIS-connected (or inspired) Muslim jihadist or just another drug-crazed, mentally ill loser who couldn’t find a girlfriend.

Last Halloween, the troops were warned:

Military facilities around the U.S. are on alert, urging troops and their families to take precautions amid continued threats of violence from the Islamic State group.

The responses to that threat are being driven not just by the need to ensure protective measures are taken, but also to address increasing concerns being voiced by troops and family members who are worried about safety for their loved ones and themselves. It marks a shifting mindset, from one of full confidence that the military community was safe on its home turf to an unsettling sense that that is where they are newly vulnerable. …

[T]he Marine Corps distributed a servicewide announcement instructing personnel to report “even the most minor suspicious activity” and to watch what they share on social media. Doing so, the message says, will help reduce the likelihood of an attack.

Similarly, last December the FBI warned the troops about potential threats to their personal safety from ISIS operatives within the USA:

The FBI … issued the strongest warning to date about possible attacks by the ISIS terrorist group against the U.S. military inside the homeland, officials tell ABC News.

In a joint intelligence bulletin issued overnight by the FBI with the Department of Homeland Security, officials strongly urged those who serve in uniform to scrub their social media accounts of anything that might bring unwanted attention from “violent extremists” or would help the extremists learn individual service members’ identities.

“The FBI and DHS recommend that current and former members of the military review their online social media accounts for any information that might serve to attract the attention of ISIL [ISIS] and its supporters,” the federal bulletin sent to law enforcement agencies said, advising that troops “routinely exercise operational security in their interactions online.”

Officials said they fear copycat attacks based on what happened in Canada … when two uniformed Canadian soldiers were killed in two separate incidents by young men who claimed they were ISIS followers.

Keep in mind that Skarlatos received a good deal of media attention, including a visit to the White House and, of course, this scheduled appearance on Dancing with the Stars. He also appeared on multiple national television news and talk programs.

The fact that Skarlatos attended (and planned to return to) Umpqua Community College was out there. Does anyone doubt that this hero might be a target of jihadists bent upon revenge and their idea of glory? If ISIS “put out a hit” on the man who says he killed bin Laden, is it beyond the realm of possibility that the heroes of the French train attack may also be in their sights?

Another incident to keep in mind. Remember this helicopter “crash”?

U.S. Central Command’s official investigation concluded that a rocket-launched grenade from a Taliban fighter standing near the landing zone clipped a rotary wing, sending the Ch-47 Chinook into a violent downward spin. It was the worst day for fatalities in the history of naval special warfare.

How did the Taliban just happen to know where that helicopter would be? But I digress …

Have we been told the truth about the Oregon shooting? Will we ever learn the truth of this attack at Umpqua Community College, or will the truth be hidden and subsumed by a politicized quest to “never let a serious crisis go to waste?”

What’s happening here? Is a potential ISIS attack on the homeland being covered up and turned into a blatant political campaign to deep-six the Second Amendment and disarm American citizens?

(While searching for links to back up the information provided above, from memory, I ran across an article that shows that I’m not the only person wondering about the potential that this was an Islamist terror attack.)

80 responses to “Harper-Mercer: Mentally Ill or on a Mission?”