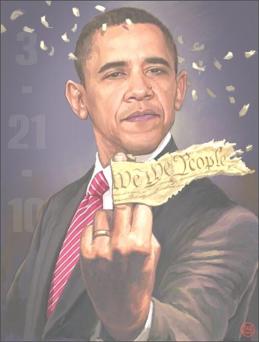 After reading Obama’s speech about the Oregon shooting, I noticed something interesting, perhaps instructive.

Here’s just one sentence from Obama’s speech, in which he promised to politicize these incidents even more than he already does, in order to further his goal of imposing stringent gun control (if not confiscation) upon the USA, according to UN dictates:

We talked about this after Columbine and Blacksburg, after Tucson, after Newtown, after Aurora, after Charleston.

Notice anything? These are the shootings that Obama singled out:

Columbine: 1999 – alleged shooters were both white

Blackburg: 2007 – alleged shooter was a South Korean citizen and Asian

Following are a few similarly well-publicized shootings that have taken place since Columbine:

Chattanooga, TN: 2015 alleged shooter was Muslim and of Palestinian ancestry, with Jordanian citizenship, although born in Kuwait

Obama is rather selective in his choices, wouldn’t you say? Do you perceive a pattern here? Any other way his selections could be explained, other than that he sees the world  through the lenses of race and religion?

Note: I used “alleged” in any situation where the probable shooter was killed or committed suicide, so that the case was never adjudicated.