Orange Is the Color of the Animas River’s Soul 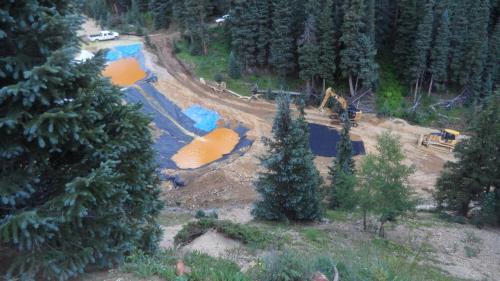 Hurriedly constructed retention ponds, built in an attempt to contain and treat the water spilling from the Gold King Mine.

Orange appears to be a recurring theme for us lately.

Over a week ago (!), the EPA (technically, one of their contractors) turned the Animas River in Colorado a putrid curry orange, when they spilled into the river a tremendous amount of contaminated waste water from a defunct mine. This “accident” happened while the EPA was allegedly trying to prevent a spill and “clean up” a mine that’s been inactive for over 90 years. Their bone-headed blunder is raising many questions in the blogosphere.

Where are you, anyway, Barry? Will you take responsibility for your very own “Hurricane Katrina”? Oh, yeah. Nearly forgot: you’re golfing on Martha’s Vineyard. As usual.

How long before somebody’s head rolls for this misjudgement, which a retired geologist publicly warned about over a week before?

Common sense tells any reasonable being that if you deliberately plug some outlets and allow water to build up in tunnels of interconnected mines on the same mountain, or deliberately raise the water table on that very same mountain, then something’s gonna give somewhere, somehow.

One question many have is why this story has been flying below the radar for over a week? My own local paper didn’t report on the spill until a week later, when they finally picked up this story that, in a backhanded way, blames the locals and the mining companies for the spill, even though the spill was caused by the EPA’s blundering!  In typical JournoList fashion, the mainstream media must have been waiting for Obama’s excuses to be invented so they could be dutifully repeated ad nauseum.

Local authorities and mining companies, the “journalists” argue, resisted having the area named a Superfund Site because they feared “stigma”, which would cause a loss of tourism dollars and/or an end to any further mining. Then that old bugaboo was trotted out: these local folks simply “haven’t trusted the federal government.” Imagine that. They must be bitter clingers, too.

Some writers, however, have suggested that perhaps this accident wasn’t very accidental.  They wonder whether or not the EPA deliberately caused the spill in order to force the issue, to get access to more federal “emergency” monies, to build a huge treatment plant, to hire thousands of workers, and to increase regulation and put more land off limits to mining. Sounds like a plan! A plan typical of the Obama administration, so don’t rule it out, out of hand.

Also typical of the Obama administration was the “agreement of sorts” made between the EPA and the locals and the mining companies, wherein the government would apparently behave as if this were a Superfund site without, however, actually labeling it as one. This deal somehow allowed the EPA to cough up 1.5 million of taxpayer dollars to clean up what nobody else wanted to pay to clean up. Sounds like another Obama administration end run around laws duly passed by Congress.

Interestingly enough, the EPA knew that their solution to this toxic solution might cause problems elsewhere:

At the Red and Bonita Mine, where polluted water is pouring out at 500 gallons per minute, Environmental Protection Agency workers would like to put a stop to the flow by September, said Steven Way, on-scene coordinator for the agency. …

The $1.5 million construction project is set to start in mid-July, and it will require workers to muck out nontoxic mineral deposits from the floor of the mine before installing a concrete bulkhead. It is not a Superfund project, but the EPA plans to pay for it, Way said. [Via what accounting gimmick, the story does not explain.]  …

The EPA understands that this new bulkhead could have the same effect as the American Tunnel bulkheads and cause water to drain from other mines. As a result, the agency plans to monitor the Gold King number 7 level and the Mogul because they are both nearby, Way said. …

“This, in a way, is as much an experiment as the American Tunnel,” said Steve Fearn, co-coordinator of the Animas River Stakeholders Group.

A 1.5 million dollar failed experiment that will now cost who knows how many more taxpayer dollars to fix? As I said,

The president of the Navajo Nation says the EPA lied to him about the seriousness of the spill and now he questions everything they tell him. Join the club! Two thirds of the Animas River flows through the Navajo Nation, affecting all their people.

Residents throughout the affected area were kept in the dark about the spill for 24 hours. Why? The people might have taken steps to protect themselves and their livestock in the meantime. One can only wonder what kind of discussions were taking place in the bowels of the White House, as they formulated their excuses and chose the lucky scapegoats.

Where did the money come from to pay this contractor? Not yet explained, although supposedly Congressional investigations will take place.

What effect did Barry’s campaign to put coal companies out of business have on the lack of money for mining cleanup?

It wasn’t until the federal Surface Mining Control and Reclamation Act passed in 1977 that mining operators had to create a plan for cleaning up defunct mines.

for states to clean up long-abandoned mines, like the Gold King (which closed in the 1920s). But funds, drawn from taxes on coal-mining companies, are limited.

Just another of the unforeseen consequences of deliberately putting coal companies out of business–they won’t be paying taxes anymore.

Back in February, Democrat Representative Raul Grijalva introduced a bill, the Hardrock Mining Reform and Reclamation Act, which would

-Use those royalties and money raised by newly established pollution fees to clean up abandoned hard-rock mine lands across the country.

-End the antiquated patenting system that allows companies to purchase mineral-containing public land for as little as $2.50 per acre.

-Establish strong reclamation standards and bonding requirements to make sure taxpayers don’t pay for cleanups if a company skips town or goes bankrupt.

-Provide clear authority to federal land managers to reject a proposed mine if it would unduly degrade public lands or resources.

What a convenient “wakeup call” this “accident” provides to further Rep. Grijalva’s quest to give the federal government, in the form of unelected bureaucrats, more control over “public lands”. Wait for Obama to argue that if the bill hadn’t been stalled in Congress, then this spill would never have happened.

What was the contractor’s name and is the contractor exempt from prosecution or lawsuits? The contractor whose employees caused the spill is now identified as Environmental Restoration LLC (aka, ER. Note: a limited liability corporation). The contractor refers to a privacy clause in its contract that keeps them from commenting, but they issued a statement, found at this link. Apparently, the company has done a lot of work for the government:

ER has gotten $381 million in government contracts since October 2007, according to a WSJ review of data from USAspending.gov. About $364 million of that funding came from the EPA, but only $37 million was given to ER for work they had done in Colorado.

A million here, a million there. All the money extracted from the wallets of We the People is fungible. One must wonder what “branch” of the  EPA paid for this “experiment”.

Why was the incident initially downplayed? Earlier reports claimed that the spill consisted of a million gallons of toxic waste, but that grew to an (admitted to) three million gallons.

Suddenly and apparently miraculously, however, things are looking up, after having been very “dire” early on.

The situation seems much less dire now, according to recent tests of the river. Local drinking water is safe, but the intake valves from the river have been shut off. The state Parks and Wildlife Department reports no dead fish have been spotted along the water. Larry Wolk, Colorado’s top health official, told CNN Tuesday that early tests show that the water near Durango, the Colorado city where the spill originated, “doesn’t appear” to pose a health risk, but didn’t specify to whom—humans, wildlife, local ecosystems, or all three.

Compare to this early article that discussed the potential effects:

And our river will continue to look like crap for a while. Even once the color becomes less sickening looking, the toxic heavy metals will remain. No fish will be left. Plant life will be decimated. This water is the secondary drinking water source for Durango, CO. A few more miles downstream, it is the primary drinking water source for Aztec & Farmington, New Mexico. It will eventually work its way to Lake Powell…

Nothing will bring the fish back any time soon. All human activity has been banned from the river–and our Sheriff has applied the force of Law, making it illegal to enter the river. Rafting companies are out of business. Fishing guides are out of business. Ranchers who water their livestock have been advised to secure their animals away from the water. Officials have advised that the water will kill your small pet. No swimming, floating, fishing allowed. And the river is used for irrigation by ranchers for their hay to feed their livestock over the Winter–or rather, it used to be. Grasses suck up that toxic slop, making it unsafe for critters to eat.

It seems that as soon as the story began to get legs in the mainstream media and  attention in the blogosphere and from some presidential candidates, the problem was solved.

The EPA accepted responsibility and apologized. The river is clear again, as if that means anything. Little fishies (all but one) survived immersion in the sludge. Bugs are still swimming around. (Keep in mind that these are probably native creatures that are quite well adapted to that environment, which is awash in heavy metals.  Indeed, if it weren’t, there wouldn’t be mines there in the first place.)

Even the Democrat governor of Colorado was photographed drinking water (allegedly) right out of the river. What a guy! Hopefully, it won’t kill him, but it will, alas, “kill your small pet.” Or will it?

Nothing to see here, folks. MOVE ON.

We hear the typical rationalizations and excuses that follow any disaster that happens on Obama’s watch.

For example, if the locals would have allowed the declaration of a Superfund Site, this wouldn’t have happened. (So it’s their fault. But it also begs the question: Under Superfund, would the contractor have behaved differently?)

Another excuse: The earth holding back the wall of sludge would have failed sooner or later, so it’s not the fault of the EPA’s contractor (even though the EPA plugged the other mines, causing tunnels in connected mines to fill with water and raising the water table, causing even unconnected mines to fill with water, raising the water pressure on the earth holding back the sludge, causing … the “accident”.)

This “accident” seems more than a little too convenient, considering Grijalva’s bill (supported by Obama), the controversial rules changes to the Clean Water Act, the expressed desire of some presidential candidates to eliminate the EPA altogether, the EPA’s push to make the Silverton/Durango area a Superfund Site, and Obama’s campaign against mining of all sorts (including coal, as well as uranium).

One thing is certain: Be assured that We the Taxpayers will foot the bills for all of this. All of it.

And that also serves Obama’s goals quite well. It’s all good.

All good, according to Cloward and Piven.

More links: This story explains how they’re emergency-treating the water, as illustrated in the photo at the top of the post.

This link goes to a slide show of photos of the disaster.