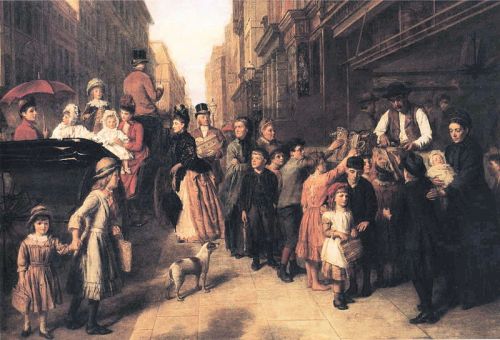 We recently learned that Hillary Clinton’s income places her and her husband not only in the top 1% of income “earners” (among those hated one-percenters) but also in the top tenth of that top 1% (quite an elite group)!

Oddly enough, “income inequality” is one of the “four pillars” of Hillary’s platform. She tried to explain her gripe on behalf of We the Peons: [emphasis added to quotes]

Doesn’t she mean as she was being driven (as in chauffeured) there over the last two days? I digress …

There is most definitely something wrong when a woman like Hillary Clinton and her husband “earn” hundreds of thousands of dollars simply for speaking. Talking, and for how long? A few minutes? A few hours? How much is that per hour? A cool hundred thousand dollars? Maybe more? Sure beats flipping burgers at McDonald’s. Nice work if you can get it. If only I got paid by the word!

Hillary, despite her own wealth, imagines that she can

be a champion for those against whom the economic deck remains “stacked” in favor of “those already at the top.”

Does she mean the deck that’s stacked in favor of people like herself, who are at the top? Privileged ones like her husband? Her daughter? Her erstwhile opponent, Barry Obama?

So there Hillary is, campaigning against herself. Interesting.

Hillary Clinton’s pseudo-populist campaign requires that she position herself as a public servant who lies awake at night agonizing over the plague of income inequality and contemplating what she can do to rescue the bedraggled, impecunious and deprived 99 percent of Americans, with whom she could once identify and now can only imitate.

She’d be better to lie awake at night and worry about how she’ll keep her butt out of the Big House. Scooter Libby knows all about what can happen to someone accused of obstruction of justice, perjury, and making false statements. But, again, I digress …

Recently the world lost “a beautiful mind” when mathematician John Forbes Nash Jr. passed on. Here’s his take on the disparities between rich and poor nations:

Well, these are popular themes, but you find something that people are talking about and you may find that there are differing opinions. There’s the most widely held opinion, but there are maybe some other opinion that is more scientific or more subtle. It is easy to say that there are the rich and the poor and so something should be done. But in history there are always the rich and the poor. If the poor were not as poor we would still call them the poor. I mean whoever has less can be called the poor. You will always have the 10% that have less and the 10% that have the most. But maybe comparatively they’re not so bad.

Subtlety, however, is not a Clinton forte. Nor logic. Nor science. Nor mathematical genius.

How “poor” is poor? Are there any persons in the USA who truly are poor, taking into account all the social benefits available to them, courtesy of earners?

What, then, does Hillary want? Income equality? If so, then she ought to stop taking millions of dollars merely for speaking and begin to redistribute her excessive wealth immediately.

While she’s at it, Hillary can explain exactly how she, as president, plans to achieve income equality for all without overturning our Constitution and imposing communism.

Speaking about the ideology of Progress, Karl Kraus once said,

Progress will make wallets out of human skin.

We the People need to think more than twice about electing this woman to the presidency.