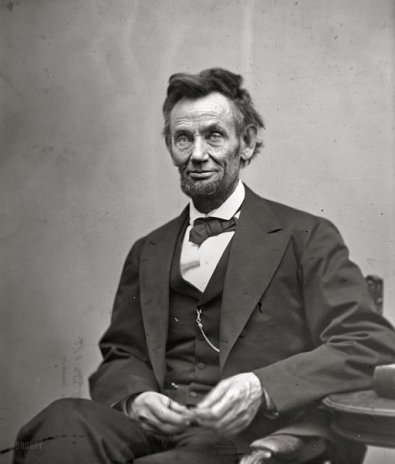 Today is notable for two reasons: It’s Tax Day and it’s also the 150th anniversary of the death by assassination of President Abraham Lincoln. Whether there’s a symbolic nexus between those two distinctions, I leave it up to readers to decide.

I recently read an interesting take on President Lincoln, concerning the notion that since the 1960s, with the rise of African-American activists and civil rights leaders, Lincoln has fallen somewhat into disfavor, perhaps because blacks prefer their own kind as heroes and role models.

In the sixties and seventies, some people began to “diss” Lincoln by arguing that he didn’t wage the Civil War in order to free the slaves–that was only incidental to his desire to maintain the unity of the Republic. Others implied that he was rather a warmonger. But in a new hypothesis, Lincoln’s death was a direct result of his arguing for voting rights for blacks:

“Lincoln [a Republican, by the way] was murdered not because he issued the Emancipation Proclamation nor because he expedited the passage of the 13th Amendment abolishing slavery throughout the land, but because on April 11, 1865, he publicly called for black voting rights,” said Michael Burlingame, Naomi B. Lynn Distinguished Chair in Lincoln Studies, at University of Illinois at Springfield.

Booth, in the audience for that speech, vowed then to kill Lincoln, said Burlingame, author of the 2008, two-volume: “Lincoln: A Life.”

“It seems to me appropriate that we consider Lincoln as much a martyr to black civil rights as Martin Luther King, Medgar Evers … or any of the other champions of the civil rights movement of the 1960s,” Burlingame said.

While we’re praising the dude, however, let’s not forget, ladies, that black men got their voting rights (1869) long before women of any color got theirs (1920, a full 51 years later! Half a century seems a very long time, at least to me.)

Have you filed your tax return yet? If not, the IRS will be looking for you soon.

Don’t confuse Tax Day with Tax Freedom Day, which is April 24 this year. The latter is the date at which we collectively (meaning taxpayers) have had enough extracted by force from our incomes to fill the government coffers in order fund everything that the government does with our money, whether we want it to or not.

2013 Runners in the Boston Marathon were murdered by Muslim terrorists.