70 Years Ago Today, the Greatest Generation Saved the Free World …

Let not their sacrifices be in vain. 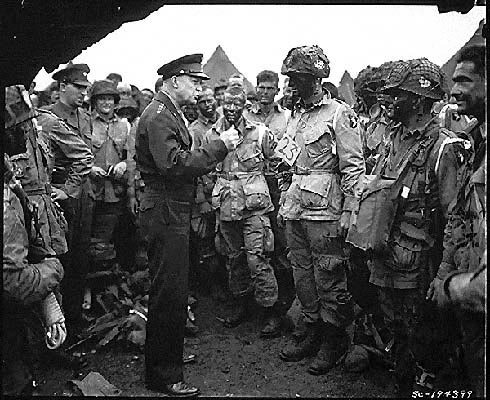 After a long life, Eisenhower, by his own request, was buried in an $80 government-issue coffin.

General Dwight D. Eisenhower was buried in his World War II uniform. It consists of “pink” trousers and the green “Ike” jacket that he made famous. Although he was one of the most decorated military men in history, his uniform had only the following medals: Army Distinguished Service Medal with three oak leaf clusters, Navy Distinguished Service Medal, and the Legion of Merit.

President Eisenhower believed that leading the troops at Normandy was his most important and lasting accomplishment, and honor.

The landings on the beaches of Normandy:

The Battle of Normandy:

During World War II (1939-1945), the Battle of Normandy, which lasted from June 1944 to August 1944, resulted in the Allied liberation of Western Europe from Nazi Germany’s control. Codenamed Operation Overlord, the battle began on June 6, 1944, also known as D-Day, when some 156,000 American, British and Canadian forces landed on five beaches along a 50-mile stretch of the heavily fortified coast of France’s Normandy region. The invasion was one of the largest amphibious military assaults in history and required extensive planning. Prior to D-Day, the Allies conducted a large-scale deception campaign designed to mislead the Germans about the intended invasion target.

By late August 1944, all of northern France had been liberated, and by the following spring the Allies had defeated the Germans. The Normandy landings have been called the beginning of the end of war in Europe.

Today we remember all of those brave troops, including those of our allies.  We honor all of them: Those who gave their lives so that we may remain free, as well as the veterans who returned to our everlasting gratitude.

All love and honor to them.

May God bless them and their families.

May God continue to bless the United States of America.

67 responses to “70 Years Ago Today, the Greatest Generation Saved the Free World …”