Just for kicks, here’s a list of some of the many teachers who claim they taught Barry Soetoro/Obama in elementary and high school:

Kindergarten:  Most of us had one kindergarten teacher. Barry, as usual, is an exception. He had at least four, and counting:

Aimee Yatsushiro says she taught Barry from September to December 1966 at Noelani Elementary School in Hawaii. Katherine Nakamoto taught him at the same Hawaiian school from January to June 1967. Kazuko “Alice” Sakai was their supervisor, and she also taught Barry at Noelani. His records, mysteriously, have been lost. September ’66 through June ’67 comprises a year of kindergarten. However …

Iis Darmawan was said to be his kindergarten teacher at the Catholic elementary school in Indonesia, Fransiskus Assisi, which suggests that Barry was registered for kindergarten prior to the 1st grade registration, which dates to January 1968. Darmawan shared that, while in kindergarten, Barry wrote an essay about how he wanted to be president. In what language did he write this essay? We don’t know. In this story, Darmawan stated that Barry “quickly picked up” the “local” Indonesian language; we already learned that classes at the Catholic school were taught in Indonesian. According to the official story, Barry arrived in Indonesia in late October, 1967, so he could have been in kindergarten there only from late October through December 1967. Yet, somehow, as a kindergartener, Barry wrote an essay that Darmawan remembers nearly half a century later. We’re to believe that Barry wrote this essay at an age when most children have not yet learned their letters. Perhaps Barry, having completed kindergarten in the States, was nevertheless put into kindergarten in Indonesia so that his mother could work outside the home, although multiple stories allege that Barry’s mother home schooled him. The second semester of the Indonesian school year begins in January.

Oddly enough, Barry himself mentioned in 2011 that he attended first grade at Noelani school in Hawaii. He did not name his teacher, but perhaps he attended Noelani for one month in first grade, before abruptly moving to Indonesia in October ’67.

2nd grade: Cecilia Sugini Hananto taught Barry in second grade at the Catholic school in Indonesia. “Teachers, former playmates and friends recall a boy who never fully grasped their language and who was very quiet as a result.”

3rd grade: Fermina Katarina Sinaga taught Barry in third grade at the Catholic school in Indonesia, although this story says Barry “completed third and fourth grades” at the Muslim public school. Sinaga described how Barry acted like an unelected school hall monitor, as if he were the teacher. She also said that Barry wrote an essay about how he wanted to be president–the second essay, this one written for a different teacher, about his desire to become president of some country. According to David Maraniss, Barry called Sinaga Bu Fer.

Now we come to third grade at Noelani elementary school, back in Hawaii, as recounted by Scott Inoue, who supplied the public and the White House with a snapshot his mother kept of Barry and Scott together, around Christmas time, 1969. Scott clearly remembers that Barry was in third grade with him. Who their teacher was, is unknown; Scott mentions only a “student teacher” who posed the children for snapshots.

Effendi (aka Pak Effendy, “Pak” meaning “Sir”) taught Barry in third grade  at the Muslim school, Sekolah Dasar Negeri Besuki (aka SDN Menteng 1). Effendi said that Barry’s mother did not like him to study the Koran (taught by Pak Khudori, according to Maraniss); he also said that Lolo was Barry’s father. Effendi further explained that Barry was taught by a Muslim teacher because he was Muslim, and was registered as such. Maraniss wrote that Effendi was Barry’s religion teacher, so perhaps Pak Khudori was Barry’s mengagi teacher. At Besuki, unfortunately, bugs ate Barry’s records (or else floods destroyed them. Take your pick.) Barry got no respect.  His friends said he had ears like fried dumplings, was “chubby”, and ran like a duck. He also played soccer with a young man seven years his senior, and had an “openly gay” transvestite nanny, but never mind all that. One of Barry’s friends, Slamet Januadi, recalled a parable Barry told, about why it’s good to be president. And so, as with kindergarten, Barry had multiple teachers in third grade.

4th grade: Tine Hahiyari (aka Hahiyary), once a vice principal at Besuki, was named as Barry’s teacher, but another story stated that Hahiyari denied being Barry’s teacher and instead offered that the now-deceased and mysteriously named Hendri was Barry’s teacher in fourth grade. Barry’s mengagi (orthodox Islamic studies) teacher was “Maimuna and she lived in the Puncak area, the Cianjur Regency,” according to Hahiyari. This story mentions another teacher at the Muslim school,  Ibu Karim, but doesn’t specify which grade. This story states that Barry was at the Muslim school for both third and fourth grades. A friend from Barry’s Muslim school days noted that all the children at the school were of the elite class and that “the school was where wealthy top government officials and bankers sent their children.” He also helpfully and specifically noted that Barry left in August 1971.

5th grade: Mabel Hefty taught Barry in fifth grade, back in Hawaii, at the elite Punahou school; he joined her class in the autumn of 1971. By an odd coincidence, Hefty had just returned from a long sabbatical in Kenya, of all places, where she was a teacher and “advisor” for USAID (for which Barry’s mother also coincidentally worked, although allegedly in Indonesia). When Barack Obama Sr. made his mysterious month-long trip to Hawaii in late 1971, he spoke to Hefty’s class, which at the time included Barry. Barry was taught math and science by Pal Eldridge in fifth grade. 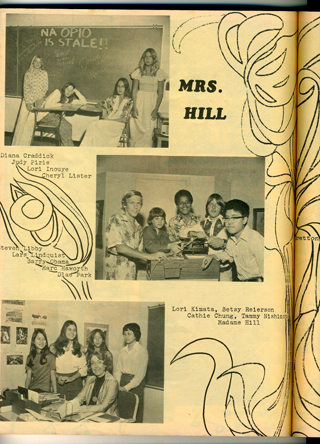 Surely other teachers have been quoted or cited in news articles. If others are found and mentioned in comments, below, the post will be updated.