What a contrast there is between Washington and our current president. 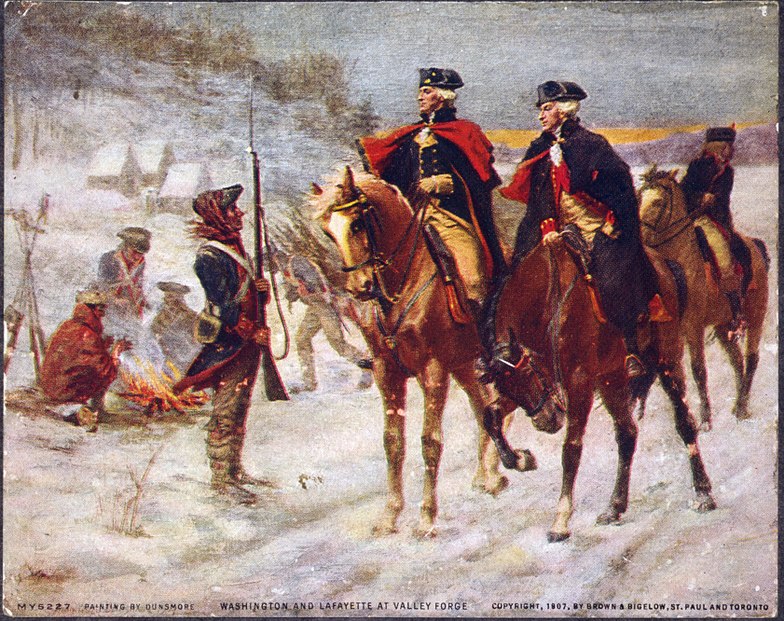 It was cold. It was wet. Yet Washington was leading, and not from behind. He was a brave man.  Ever in the thick of it. Seemingly unafraid.  A leader.

In one battle early in his career, Washington had two horses shot out from under him. When the battle was done, he found no less than four bullet holes in his coat.  Thanks be to God, he was unscathed.  He had fought on, despite being, in his own words,

not half recovered from a violent illness, that had confined me to a bed and a wagon for above ten days.

At the Battle of Princeton, during the Revolutionary War, the Americans were being routed by the British until Washington rode out in front, calling out to the retreating troops,

Parade with us, my brave fellows! There is but a handful of the enemy, and we will have them directly.

And have them, he did.  Washington rode to within 30 yards of the enemy.  What a target he must have made!  A tall man, on a white horse.  A sitting duck for any keen-eyed Brit with a weapon. But Washington led on, and he won the war; and We the People won our freedom. Here is how our current president leads:

Barack Obama was recently overheard bragging to the French president,

That’s the good thing about being president, I can do whatever I want.

Most of the time, it appears that what he wants to do is play golf and jet around the country, making “important” speeches.  There’s something else Obama wants to do, however, and that’s to rule with a pen and a phone:

Can the president legally bypass Congress and rule the government by decree?

The answer to the question above is: No. But you wouldn’t know that by listening to President Obama. …

In a menacing statement at a cabinet meeting last month, … the president has referred to his pen and his phone as a way of suggesting that he will use his power to issue executive orders, promulgate regulations and use his influence with his appointees in the government’s administrative agencies to continue the march to transform fundamentally the relationship of the federal government and individuals to his egalitarian vision when he is unable to accomplish that with legislation from Congress. …

The Framers were so concerned with the potential of presidents to decline to enforce laws with which they disagreed that they inserted the word “faithfully” in the presidential oath when describing his enforcement obligations, and then they inserted the oath itself into the Constitution.

George Washington, of course, was one of the Framers of the Constitution.  Washington’s thoughts about the power and limitations of the presidency couldn’t differ more from Obama’s: [emphasis added to the following quotes]

Although he sponsored and supported legislative proposals submitted to Congress for enactment, [Washington] carefully avoided trying to dictate or unduly influence the judicial and legislative branches of the government. In not vetoing bills with which he disagreed unless there were constitutional questions, he set a precedent of executive restraint that would be followed by the next five Presidents. …

Also, although Washington hated partisanship and political parties, he tolerated dissent, vicious attacks on his reputation and name, and a divisive press—all in the interest of freedom. There is little reason to suggest that Washington, unlike so many of his successors, ever sought to use his office for personal empowerment or gain. Neither did he shelter his friends for the sake of their friendships when conflicts of interest arose.

Perhaps most importantly, Washington’s presidential restraint, solemnity, judiciousness, and nonpartisan stance created an image of presidential greatness, or dignity, that dominates the office even today. [No longer, imho.]

He was the man who could have been a king but refused a crown and saved a republic.

Though he could have been king, or at least remained president for life, Washington retired.  Can anyone imagine Obama refusing a crown or an endless number of terms?   Washington wrote to the American people upon  his retirement.

The entire address is well worth reading, especially to grasp the humility of the man, who acknowledged his own perceived lack of experience upon first taking office as president.  Compare and contrast to Obama.

Much of  Washington’s missive seems especially pertinent to our times.
(click the 2, below, to read excerpts from Washington’s address.)