Who Is Patricia Ann “Pattie” Millett? 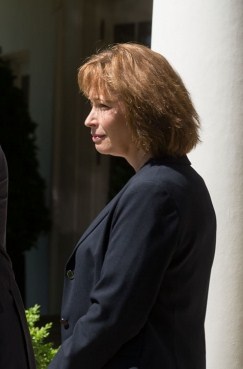 Last week, the Republicans blocked the nomination of Patricia Millett to the U.S. Court of Appeals for the District of Columbia because Obama is trying to pack the court that has the most to say about his policies and the tactics used by his administration to do end runs around the law and the Constitution.

As a result, Harry Reid (who voted against Millett) is once again threatening the nuclear option, which, of course, if ever invoked will come back to bite the Democrats big time, if and when Republicans ever control the Senate again. [emphasis added to quotes]

Republicans opposed Millett’s nomination because they feared it would tip the balance of power on the D.C. Circuit court, which is  generally thought to be the second most important court in the country, behind the Supreme Court. The GOP also argued that the circuit court’s small caseload didn’t require a swift confirmation.

White House press secretary Jay Carney accused the GOP of obstruction. He called Millett “extraordinarily qualified” and said the arguments some Republican senators have made about the court’s small caseload are “astoundingly hypocritical.”

But who is Patricia Millett?

Patricia A. Millett co-heads Akin Gump’s Supreme Court practice and the firm’s national appellate practice. She has argued a total of 32 cases before the U.S. Supreme Court and approximately 36 in the courts of appeals. She has briefed scores of cases in the Supreme Court and appellate courts across the nation. On June 4, 2013, she was nominated by President Obama to serve as a judge on the U.S. Court of Appeals for the D.C. Circuit. …

Prior to her employment with the Office of the Solicitor General, Ms. Millett worked for four years in the Department of Justice’s Civil Division, Appellate Staff, where she briefed and argued more than 20 cases before the federal courts of appeals and, occasionally, state appellate courts. Before that, she clerked for two years for the late Judge Thomas Tang, on the U.S. Court of Appeals for the 9th Circuit. She also worked for two years in the litigation department of a Washington, D.C. law firm. [Associate at Miller and Chevalier, 1988-1990]

That’s Akin Gump Strauss Hauer and Feld LLP, the same law firm for which Vernon Jordan is Senior Counsel and where Jordan has been employed since 1982. Vernon Jordan is the great-uncle of Valerie Jarrett, who is currently a Senior Advisor to Barack Obama and Assistant to the President for Public Engagement and Intergovernmental Affairs.  More about that law firm in a moment.

Millett’s lengthy resume, as provided to Congress, is found at this link, and is the source for much of the biographical information in this post.

From early 1985 through late summer 1988, Millett worked at Frost and Sullivan:

Frost & Sullivan is a global growth consulting firm which provides market research and analysis, growth strategy consulting, and corporate training services across multiple industries including automotive, healthcare, internet and communication technology, and more. Its headquarters are located in Mountain View, California, with offices in over 40 countries.

Frost & Sullivan Institute (FSI) is a non-profit associated with the consulting firm.  To say the “challenges” they plan to “attack” are globalist in nature is an understatement:

This list serves only to give a flavor of the types of issues we will be addressing over time. Each challenge is not discrete and cannot be solved without addressing many related issues.

The list will be developed and change over time, and, hopefully, more issues will be solved and dropped from the list than new issues identified that will impact our future.

Millett told Congress that she worked at Frost & Sullivan, Inc., presumably the consulting firm founded in 1961 and not the non-profit, which may not have been in existence in the mid-1980’s. (It’s difficult to determine when the Institute was founded.)

Because of its focus on “competitive intelligence”, the company Frost & Sullivan sounds very much like Business International Corporation (BIC) where Barack Obama worked after college.  Millett’s position at Frost & Sullivan was Temporary Consultant on Papua New Guinea.

In 1984, Millett published an article in The World Today, which is previewed here.  The article concerned the “political institutions” and “foreign relations” of Papua New Guinea and was co-authored with Bruce George, M.P. (liberal Labour Party), for whom Millett was a “volunteer summer intern” the following year (1985).

At the time the article was published, Millett was a “politics student” at the University of Illinois and a researcher in the United Kingdom’s House of Commons. The article points out that Papua New Guinea shares the island of New Guinea with Irian Jaya, an Indonesian territory.

These facts are interesting given that Barack Obama was born a British subject; spent his childhood years in Indonesia; was adopted by an Indonesian, Lolo Soetoro, who had moved his family to Jakarta from Papua New Guinea; and was thought by Indonesian classmates to be a native of that island:

I thought he [Barack Obama] was from Papua, Indonesia’s easternmost province. He had curly hair, dark skin and was a fat boy.

Millett later wrote articles for SCOTUSblog, a publication which, although focused upon the Supreme Court of the United States (SCOTUS), oddly enough didn’t report on any of the cases that went to the Supreme Court after citizens challenged Barack Obama’s qualifications under the Constitution to be president.  Millett’s work at Akin Gump specifically concerned the Supreme Court, so it would seem that she should have been particularly interested in those cases.

At this link, I chronicled other interesting connections between Obama and the law firm of Akin Gump.  For example, Savannah Guthrie was the only member of the media who was given access to what was said to be Obama’s “original long-form birth certificate.”  Savannah Guthrie is a lawyer as well as a talking head:

The Akin Gump law firm is … associated with the SCOTUS blog, through the blog’s founder Tom Goldstein, who once also worked at Akin Gump but left to start his own firm, which now oversees the SCOTUS blog …

Robert Bauer … [is] the lawyer most responsible for fighting the Obama ineligibility lawsuits, which are studiously ignored by the SCOTUS blog. …

Bauer [was] replaced as WH Counsel by his Deputy WH Counsel Kathryn Ruemmler, profiled in Washingtonian Magazine in July, 2006. Ruemmler attended Georgetown University Law Center, and was editor of its law review.  She was 35 at the time; she’s now about 40, the same approximate age as Savannah Guthrie. It’s likely they knew each other at Georgetown University Law Center, probably knew each other well, given that Guthrie was a Law Fellow, and Ruemmler (who graduated in 1996) was editor of the law review.

Note, in particular, this commentary about the SCOTUSblog, which was founded in 2003 by Goldstein who, along with Laurence Tribe and David Boies, represented Vice President Al Gore in Bush v. Gore:

As noted before, researchers found no mention on the SCOTUSblog of the  Obama ineligibility cases that went to the Supreme Court, including those involving certiorari, a concept which just happens to be of particular interest to Millett, who wrote an article about certiorari in 2009 for The Journal of Appellate Practice and Process.

Her article may be of interest to attorneys for clients who challenged Obama’s eligibility, as it speaks to the potential role of the U.S. Solicitor General in such cases. Has the Solicitor General been “invited” by four justices to address the topic of any of the ineligibility cases?

There are other coincidental connections between Obama and Millett:  For example, Millett has spoken to classes at Georgetown University Law Center, where Savannah Guthrie and Kathryn Ruemmler both attended law school. These classes are listed in her resume, yet in most instances she has not retained notes or syllabi, so Congress hasn’t been informed about the gist of her remarks.  The same holds true for many interviews she has listed–to learn her views, a researcher will have dig up quotations.

Millett was finishing her undergraduate degree at the University of Illinois, Urbana-Champaign (1981-1985), at the same time that Barack Obama was community organizing upstate, in Chicago.  Although Millett was born in Maine, she grew up in Illinois, where her father, was a history professor at Southern Illinois University at Edwardsville.

In 1987, Millett worked at the U.S. Attorney’s Office for the District of Massachusetts in Boston. That same year, Obama’s paternal uncle, Omar Okech Onyango Obama, was surreptitiously living in Boston and evading taxes. He was ordered deported, but went on the lam for several decades, until his recent arrest for driving under the influence.  Omar Obama has a deportation hearing scheduled for early next month, on December 3.  His sister Zeituni also lived as an illegal alien in the Boston vicinity.  Millett was leaving Harvard Law School, in the Boston area, just as Barack Obama was entering Harvard, in 1988.

Millett was a key figure in an Arizona “voting rights” ruling, a topic that is near and dear to the heart of Barack Obama and the entire progressive cabal:

Millett delivered the Supreme Court oral argument on behalf of plaintiffs in Arizona v. Inter Tribal Council of Arizona, Inc.  At issue was a restrictive Arizona voter law that required election officials to reject any voter registration application not accompanied by documentary proof of citizenship. In a 7-2 decision, the Supreme Court sided with the plaintiffs and held that that law was preempted by the National Voter Registration Act.

In that case, Millett argued

that tens of thousands of people had been rejected from the registration rolls because of the Arizona law, though there was no evidence that they were not citizens.

And so, as with those who support Obama’s eligibility without any court-worthy documentary proof, “voters” who claim that they’re “eligible” are eligible to vote, unless someone can prove a negative–that they’re not eligible.

This stands qualifying on its head, but this is nothing new in the progressive universe.  If one were to apply the same logic to the business world, then companies would be required to hire someone who has no resume or who has provided an unverifiable resume unless and until the company can prove the person’s lack of qualifications!

Millett also wrote in support of Obama’s nominations of the progressives Elena Kagan and Sonia Sotomayor to the Supreme Court.

Most interesting: From September 2008 to November 2008, Millett was a “volunteer legal advisor” for Barack Obama’s presidential campaign.  She says that she

provided legal assistance to the Voter Protection Teams for Ohio and New Hampshire, including preparing for potential election challenges.

So Millett was among that army of progressive lawyers who fanned out across the country during the 2008 election to intimidate (with the threat of lawsuits) any election board that might challenge at the polls those who were suspected of illegally voting.  Robert Bauer was instrumental in implementing this political ploy yet again, in 2012.

In addition, Millett was advising Obama’s campaign during the height of the birth certificate controversy, the time during which the “birther movement” first coalesced.

Now Obama has nominated Millett for a prized position on the DC Court of Appeals.  So far, her nomination is blocked.  Harry Reid promises to revisit her nomination shortly.  Will he invoke the nuclear option?

One thing we’ve noticed is that Obama punishes his “enemies”–as Valerie Jarrett allegedly calls those who disagree with Obama–as Obama rewards his friends.

Does an Obama always pay his debts?

If so, then what debt does Obama owe to Patricia Millett?

116 responses to “Who Is Patricia Ann “Pattie” Millett?”