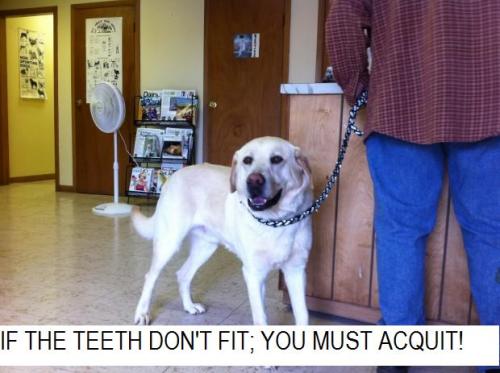 This is an update on Phineas, the yellow Labrador retriever who’s become a sensation in the Ozark town of Salem, Missouri. His story was first discussed in this post. In brief, Phineas stands accused of being a serial biter, a crime for which he was condemned to die, until dog-loving citizens rose up to object.

On Thursday, Phineas had another day in court, but the ole yeller defendant was not in attendance. That’s because someone dognapped the pooch, for the second time.  When the controversy first arose, the dog mysteriously disappeared from the poochgow, but he was as mysteriously returned.

Thursday’s hearing was an attempt to get the judge to grant Phineas a final reprieve, but the dog had gone missing again.

Last weekend, just days after subpoenas for Thursday’s hearing were sent out, the dog disappeared from the veterinary clinic where he had been housed for months. His death sentence has been on hold for more than a year while his owners challenged the mayor’s finding that Phineas was a vicious animal for biting a 7-year-old girl.

Authorities say they don’t have a clue who took the yellow Labrador retriever. They are not even sure how. There were no signs of a burglary. The dog was just gone. And in a town where strong feelings about the case are common; “Phineas for Mayor” bumper stickers have been seen; and Phineas billboards along Interstate 44 beg “Don’t let Salem, MO kill me,” the list of possible suspects is long.

“I’ve heard so many stories, it’s unreal,” said Deanna Parrett, a Salem resident who attended the hearing. “Who knows where he might be.”

The question of what happened to Phineas, while not on the official docket, repeatedly intruded into the courtroom. It seemed to undercut a hearing aimed at deciding a dog’s fate when that fate, one way or another, already seemed to have been decided by someone else.

There are allegations that the local cops weren’t all that interested in investigating who pulled off this particular caper. There was no sign of forced entry at the veterinary clinic where Phineas has been living.

Forensic evidence played a role in this case.  K-9 CSI?  Bite mark patterns, a lawyer argued, indicate that perhaps the being who bit the little girl was of the human persuasion.

Whether Phineas will get his reprieve is an open question.  The judge hasn’t made his crucial decision yet.

As the hearing ended, some spectators said they believed that whether Phineas would ever be seen again depended on what the judge decided.

If he reversed his ruling, essentially giving Phineas a second chance, they expected the dog to magically reappear. It sounded a little far-fetched. They knew this. But it already had happened once before.

Let’s all hope and pray that Phineas lives, wherever he is, and that he’s soon reunited with his human family.