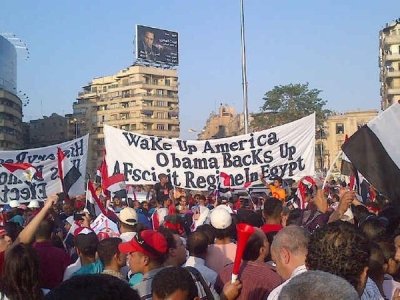 Secular and liberal factions trying to install one of their own as Egypt’s new prime minister collided into strong resistance Sunday from the sole Islamist faction that backed the military’s ouster of President Mohammed Morsi, reflecting the difficulties in building a broad coalition behind a new leadership.

As wrangling continued over the prime minister spot, giant rallies by the movements that pushed out Morsi took on a sharply nationalist tone, pervaded with posters of the military’s chief and denunciations of the United States and President Barack Obama for [what] they see as their backing of the Islamist leader. …

Throughout Morsi’s year in office, many of his opponents accused the United States of backing his administration. Washington often underlined that it was dealing with Morsi as the country’s elected leader.

Before the wave of anti-Morsi protests began on June 30, U.S. Ambassador to Egypt Anne Patterson said in a speech that she was “deeply skeptical” protests would be fruitful. She defended U.S. relations with Morsi’s Muslim Brotherhood as necessary because the group is part of the democratically elected government. …

Obama “must know that this is a popular revolution,” said Shawki Ibrahim, 37, in Tahrir with a portrait of army chief Gen. Abdel-Fattah el-Sissi dangling from his neck.

“The United States should support the people’s will and not the interest of a person or a group seeking only their own interest,” he said.

We don’t really need those signs to tell us what we already know: The president of the United States, Barack Hussein Obama II, supports the Muslim Brotherhood–the regime of Islamists whom the secular and liberty-minded in Egypt just ousted in a crushing blow to the dream of a global caliphate.  No surprise.  After all, Obama did promise Muslims that he would support them “should the political winds shift in an ugly direction.”

The wind is rather ugly in Egypt these days, at least for the forces of Islamism, although now that the winds have changed, Obama’s administration pretends that they did not support the Muslim Brotherhood.

This, despite the fact that Islamists were welcome guests in DC after the Arab Spring, meeting with officials from the National Security Council.  Other instances of Islamists being welcomed into the White House are too numerous to mention, but a simple Internet search will turn up more examples. Here’s a story about one recent meeting in “The People’s House”:

Radical Egyptian cleric Yusuf Qaradawi is considered so radical that the United States bans him from entering the country.

Qaradawi, considered the spiritual leader of the Muslim Brotherhood movement, has called for the killing of Jews and Americans.

That history makes the June 13 [2013] White House meeting with Sheik Abdullah Bin Bayyah all the more inexplicable. Bin Bayyah is vice president of the International Union of Muslim Scholars (IUMS), a group founded by and headed by Qaradawi. The IUMS has a long history of supporting Hamas –a top Hamas leader is an IUMS member – and of calling for Israel’s destruction.

Nonetheless, it was the Obama administration which sought the meeting with Bin Bayyah, his website’s account said.

“We asked for this meeting to learn from you and we need to be looking for new mechanisms to communicate with you and the Association of Muslim Scholars (another name used for the IUMS),” Gayle Smith, senior director of the National Security Council, reportedly said.

Bin Bayyah’s June 13 account placed other senior officials in the meeting, including: Rashad Hussain, the U.S. special envoy to the Organization of Islamic Cooperation (OIC), National Security Adviser Tom Donilon and White House spokeswoman Jennifer Palmieri. But the account was later changed to delete the reference to Donilon’s presence at the meeting.

Note that Islamists are welcome, but CITIZENS of the USA can no longer take tours of the White House, allegedly because of sequestration.

Huma Abedin (on the right, with Hillary Clinton) is the wife of the disgraced Congressman Anthony Weiner, the aspiring first lady of New York City, and the long-time personal assistant, body woman, and deputy chief of staff for former Secretary of State Hillary Clinton.  Abedin is alleged to have ties to the Islamist Muslim Brotherhood, through three close relatives:  Her mother, Saleha Abedin, seen below with former Secretary of State Clinton; her brother Hassan Abedin; and her father, Syed Abedin.

Although the mainstream media tried to debunk the allegations about Abedin’s Muslim Brotherhood connections, others have offered a good deal of what so far is unrefuted evidence.

A letter sent by several members of Congress to the Department of State, delineating their concerns about potential Muslim Brotherhood infiltration into our government, can be found here. Interestingly enough, on the anniversary of the mailing of that missive, Senator Charles Grassley sent a letter of his own, this one to current Secretary of State John Kerry, asking questions about work that Abedin apparently did for private clients while still being employed at the State Dept.  Grassley’s questions about Abedin’s special treatment at the Dept. of State were ignored.

One of the most ardent defenders of Abedin’s family,

Instead of  “minions“, this prince has “dwarfs” to do his bidding–they’re his modern-day version of court jesters, providing comic relief for a bored royal.  From Business Insider:

With a reported net worth approaching $20 billion, Alwaleed is number 26 on Forbes’s list of the world’s billionaires.

Alwaleed has that much money in part because, back in 1991, he invested $590 million in a struggling American bank, then called Citibank.

The bet paid off insanely well, turning the nephew of Saudi Arabia’s king into a billionaire many times over.

Then Alwaleed invested in Apple, just before Steve Jobs turned it around. He’s now the second largest shareholder in News Corporation and owns a big stake in Time Warner, too.  … [H]e took a $300 million stake in Twitter, one of the hottest American tech companies.

Prince Alwaleed calls himself the largest foreign individual investor in the United States. And he may well be.

If you recall, this is the very same Saudi prince whose $10 million donation to New York City after the Islamic terror attacks of 9/11/01 was famously rejected by then Mayor Rudy Giuliani, because the prince had opined that we brought the attack upon ourselves.  How times have changed.

Now Huma Abedin Weiner may become the wife of the next mayor of New York City.  (One really does have to continue to wonder exactly who was on Air Force One when it did that infamous reenactment flyover after Obama’s election. This was yet another outrageous “mistake” made by the Obama administration that Obama claims to have learned about from the news.)

Is the prince connected to the Muslim Brotherhood?  Why, yes he is.  This story calls him the Brotherhood’s “tech investor” because of his ownership stake in Twitter and other hi-tech businesses; the writer reminds us that during the “Arab Spring” activists organized via Twitter.  (Note that Obama himself was a self-proclaimed “community organizer”.)  This report from 2008 calls the prince “a major donor to groups linked to the global Muslim Brotherhood.” It continues, citing

Prince Talal’s donations to the Islamic Society of North America (ISNA) and the Council on American Islamic Relations (CAIR), both part of the U.S. Muslim Brotherhood, as well as his support of the Georgetown University Center for Muslim-Christian Understanding (CCMU), run by long-time Muslim Brotherhood supporter Dr. John Esposito. In May, an Arab business Prince Talal has also made numerous financial contributions to a pan-Islamic interfaith dialog organization that is closely tied to the global Muslim Brotherhood and which has an antisemitic statement posted on its website. In March, the Kingdom Foundation established by Prince Talal was one of the sponsors of a conference held by the World Congress of Muslim Philanthropists (WCMP), a new international Islamic philanthropic organization with strong Muslim Brotherhood representation.

And so we come full circle, back to the defender of Huma Abedin:  John Esposito.

We currently have a president who supports the Muslim Brotherhood.  Let’s not elect another one:  Hillary Rodham Clinton.  She plans to run in 2016; no doubt about it.  Why else did both she and Huma leave the Dept. of State when the questions began to fly?  Will we ever learn the truth about Benghazi?

Will we ever learn the answers to the questions that Congress asked about Clinton’s “second daughter”, Huma Abedin?

Their first letter was met with an astroturfed, Alinsky-like media demonization of those who dared to ask logical questions.  No answers were provided and no investigation was done, although Abedin did “quietly” leave her job at the  Dept. of State that very month. The second, more recent letter was “stonewalled” and “blown off,” according to multiple news reports.

When will We the People learn the answers?