Mayor Klaus Wowereit was in attendance. (Wow!  I like that name.) He’s on the far right, above, next to Chancellor Angela “Hard G” Merkel.

At first glance, it appeared that actor and liberal activist Alec Baldwin had found a way to crash the party.  Did he accompany his favorite president to Berlin?  Nope, that’s Berlin’s mayor. Separated at birth? 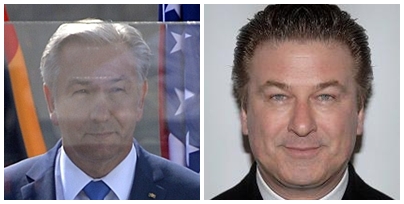 As it turned out, with TOTUS on the fritz, Obama’s speech was a dud.  Reporters asked if Obama’s “lost his mojo.” (Is that racist?)  [Emphasis added to quotes.]

It was a more muted affair for President  Obama in Berlin today as he spoke at Berlin’s iconic Brandenburg Gate before an invite-only  crowd of 4,500 guests – a remarkable difference from the rock-star welcome he  received five years ago in front of 195,500 cheering supporters.

Then, Obama had it all to play for – the  glowing presidential candidate symbolizing America’s revived hope for the  future. This time, he arrived back in Berlin under the cloud of NSA surveillance  programs which have outraged many Europeans and the ever-growing crisis in  Syria.

There’s a reason he allegedly got a “rock star welcome” the last time he spoke in Berlin, in 2008. That’s because there were free rock and reggae performances, which are what really brought all those people to the vicinity of the Brandenburg Gate.

2008 also saw considerable controversy in Berlin over the city and the country offering to a “private citizen” perks that are ordinarily reserved for visiting heads of state.  The article linked above provides an interesting history, but the excerpts below provide the evidence for what actually drew all those people in 2008:

The excitement — however artificially stimulated by opening rock bands and generously inflated crowd estimates — of Barack Obama’s speech in Berlin is now passed. …

Who paid, moreover, for setting up the stage? Who paid for the rock and reggae bands that “opened the show” before the “headliner” arrived? We know, at any rate, who paid for security: namely, the city of Berlin and hence, ultimately, German taxpayers. A special police deployment, reported to number some 700 officers, was assigned to the task. This treatment as well — the sort that is ordinarily reserved for foreign heads of state or government — constitutes a serious violation of the customary diplomatic protocols governing the relations among states.

At best, by providing Obama the high-profile “platform” put on offer by Frank-Walter Steinmeier and Klaus Wowereit, Germany involved itself in an American election campaign, thus violating a core principal of international law. At worst, by providing Obama the campaign “platform” and perhaps direct or indirect subsidies as well, Germany violated not only international law, but American law too.

In any case, whatever Americans may think of it, after Obama’s appearance in Berlin one thing is now clear: in the American elections, he is Germany’s candidate.

But is Obama still Germany’s “president” after his lame performance in 2013?

In any case, it’s clear that the price of admission in 2008 was sitting through Obama’s speech.  One wonders if the massive security kept the assembled from leaving until the speech was over.

Ever resourceful and mendacious, Obama’s campaign staff knew how to lure in the warm bodies for a photo op and correctly counted upon the complicit, Obama-loving mainstream media to just happen to neglect to mention those rock and reggae concerts.

To this day, it’s hard to find any mention of those free concerts.  Most links to stories no longer work, or the stories themselves are locked up–subscribers only.  Even so, we remember the truth.

This time, they cleverly got around the problem of explaining a poor turnout by blaming the heat and making the event “by invitation only.”  Yeah, that’s the ticket!

What about that heat?  It was allegedly grueling.  All of 86 degrees Fahrenheit!  Whew!

Angela looked cool as a cucumber.  Losing TOTUS (teleprompter of the United States) must have taken a toll on Obama, however.  Boy, was he sweating! 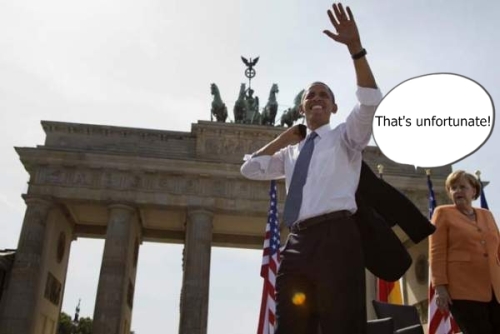 Nevertheless, he muddled through by reading from a paper copy of his prepared speech.  With no apparent sense of irony, Obama said,

And as long as walls exist in our hearts to separate us from those who don’t look like us, or think like us, or worship as we do, then we’re going to have to work harder, together, to bring those walls of division down.

Obama spoke much about the defunct Berlin Wall that day, but he also brought his own wall to the event: a 2 1/2 inch-thick plexiglass wall to be exact, although others have reported that the wall was as much as 8 inches thick.  You be the judge.  Whatever the case, that was one big honking wall and probably had something to do with the heat building up behind it.  Even school children know that glass magnifies light and heat, and keeps out cooling breezes. 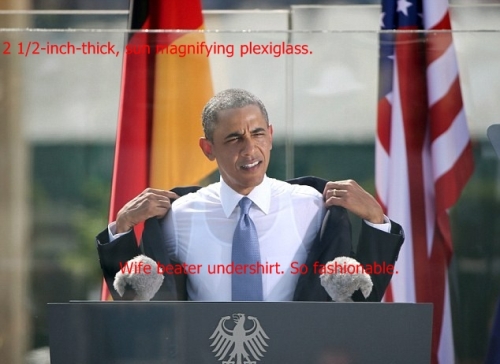 As you see, Obama came prepared for the heat, with his “wife-beater” singlet (aka “athletic shirt“, aka “muscle shirt“, which is a total oxymoron in his case).

Kennedy apparently saw no need for such a wall:

Nor apparently did Reagan:

If it weren’t a “by invitation only” event, one might understand; but these were apparently 4500 of his own supporters, hand picked, and presumably searched beforehand.  We’ll leave the security and the accompanying “optics” to Obama’s staff to explain away.  Times do change, one supposes.

Interestingly enough, Obama’s family was not in attendance.  No, they were seeing the Berlin sights, accompanied by Obama’s alleged half-sister Auma, who was educated in Germany.

That’s Auma Obama on the far left (literally as well as figuratively).

It’s been fifty years since Kennedy made his famous speech in Berlin. If Obama intended to eclipse JFK or Reagan, he failed miserably and ought to be ashamed for trying.  As writer George F. Will explained, however, Obama is habitually short on humility:

Obama’s vanity is a wonder of the world that never loses its power to astonish, but really: Is everyone in his orbit too lost in raptures of admiration to warn him against delivering a speech soggy with banalities and bromides in a city that remembers John Kennedy’s “Ich bin ein Berliner” and Ronald Reagan’s “Tear down this wall”? With German Chancellor Angela Merkel sitting nearby, Obama began his Berlin speech: “As I’ve said, Angela and I don’t exactly look like previous German and American leaders.” He has indeed said that, too, before, at least about himself. It was mildly amusing in Berlin in 2008, but hardly a Noel Coward-like witticism worth recycling.

His look is just not that interesting. And after being pointless in Berlin, neither is he, other than for the surrealism of his second term.

Hang in there, folks.

130 responses to “His Very Own Berlin Wall (Open Thread)”