Is It Really Over?

Were We Watching Martial Law Being Tested? 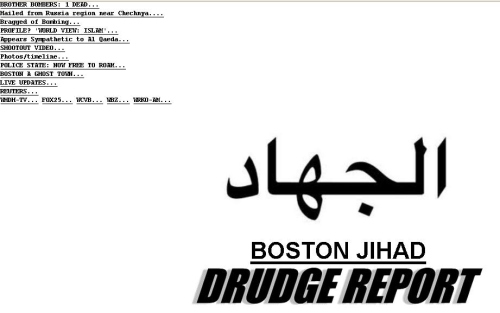 Are Obama’s sheeple still believing that the U.S.  has “Al Qaeda on the Run?”

Was the Boston Marathon Terrorist Attack another example of  “Work Place Violence” or was it a “Man Caused Disaster”?  Was it a bombing or was it a MUSLIM TERRORIST ATTACK?

Was this attack a prelude to Martial Law in the United States?  Did you even notice that everyone was told to stay in their homes, lock their doors, and not allow anyone into their homes unless they were the police? Did this even cross your mind that your constitutional rights were being trampled upon?   Looking backwards, can you see how it would work if  Obama and his regime instituted Martial Law nationwide?

Does anyone believe that the War on Terror is over?  By changing the vernacular to describe the Islamic jihadist’s goals to something that won’t offend our enemies, we are vulnerable to the massive propaganda machines of organizations like  CAIR and  its affiliates, the Muslim Brotherhood, and our own Marxist run government supported by a leftist media.

When Obama and Janet Napolitano,  Homeland Security Secretary,  scrapped the terms “war on terror” and “terrorist attacks,” we were appeasing the enemy.  Their new Leftist hygienic, sterilized language and “politically correct” terms were introduced to replace the apt and appropriately named “‘war on terror” when it became “Overseas Contingency Operations.”   In place of  “terrorist attacks” the politically correct term became “Man Caused Disasters.”  Lest we not offend religious zealots,  murderers, al-Qaeda and its off-shoots,  and the Muslim terrorists that attack us and others across the world, we sealed the deal on our  futures by allowing the enemy, the media, and the Obama administration to dictate and propagandize how they are perceived.    The name changes and rebranding of the war that is being perpetrated against the West did not change the perception or goals of those whose barbaric ideology and religious combination dictate that they  rid the world of infidels, in other words, you and me.  Obama’s inability to use the word terrorist to describe our enemies shows his anti-American bent and his protection and support for the religious Muslim zealots.

Obama’s national security bona fides are in shambles as  recently evidenced by the Ft. Hood massacre, Benghazi,  and now the Boston Marathon Terrorist Attack.   It wasn’t just a bombing, it was a Terrorist Attack.    As Obama likes to remind us in every speech that he is president or commander-in-chief, may we remind the Usurper that the number one job of a real president is to keep America safe.   He has failed miserably.  His pronouncement that justice will come to those that attack Americans falls on deaf  ears;  just ask the families of those who died in Benghazi.  They celebrate in Boston because one terrorist is dead and the other captured but will they celebrate when Eric Holder allows the youngest terrorist to be prosecuted as a common criminal instead of being sent directly to Gitmo to be interrogated?  Will they celebrate when he is read his Miranda rights instead of being deemed a terrorist with limited rights?

Obama’s policy of Muslim appeasement that removed all  references to  Muslims and Arab-Americans in FBI training manuals because some people or Muslim organization  found them offensive,  shows  their lack of comprehension about Muslim  jihad that has left us vulnerable to the real enemies of the United States.   The very enemies this administration is coddling by believing that they should unclench their fists and have a chat with the so called leader of the free world has proven it has no teeth.  The followers of the “religion of peace”  are the very ones who have infiltrated our government as “friends” and who are dictating the changes they want in our laws to perpetuate their ideological agenda.

The Marxists in power have proven that their Utopian idea of worldwide diplomacy is an abject failure, and they are insulating,  protecting, and supporting our enemies by their idea of political correctness.  We need only look at Libya, Iran, North Korea, Syria and Egypt to see how their foreign policies have worked.   The Middle East is on fire and instead of  putting out the fires, this regime adds the fuel time and time again.  Instead of showing strength,   our government led by the usurper has projected weakness in all areas.  That the tin horn dictators around the world have become more bold in their verbal assaults and threats against the United States proves that the perception of the United States as being a super power no longer holds true, and that this administration has failed.

It is time for the American people to  hold this government’s feet to the fire, and demand that they do their jobs to protect and defend the rights and liberties of its citizens.  We must demand that we correctly identify our enemies by name,  vigilantly check the backgrounds  of those who want to enter our country,  and purposefully identify our enemies who reside in the U.S. and who are shielded by our laws regarding free speech and freedom of religion.  Freedom of Religion does not give our enemies the freedom to promote the  ideas  of  jihadists within our borders.  Additionally, we must demand  accuracy in reporting and that means just because the Associated Press wants to play word games and remove descriptive words from their articles, doesn’t mean we have to adhere to their edicts.   Just because Obama invokes biblical passages in his speeches or uses patriotic language to sway the masses, doesn’t mean he means a word of what he espouses.

Americans need to say to Obama and his state-run media, “Enough, We’ve Had Enough” of your attacks on us, your support of  minority causes and your neglect of the majority.  We must put our money where our mouths are.   Those that promote and support the views of the minorities and our enemies  should be relegated to the dustbins of history, and actively silenced by using their Alinsky rules against them.

Islamic Jihad is alive and well in the United States, and forcefully must be eliminated by educating the populous and demanding that truth be told by espousing the very traditions and  values that have defined America for 237  years.

God Bless America and all those who value our republic for which it stands.  We must stand strong against the evil people who seek our demise.  We are still the red, white and blue and Obama and his minions  and the Islamic terrorists can’t remove the white and blue!

H/T:  Papoose for alerting us to the Drudge headline.