Obama will be “Exposed” as Ineligible Soon!

Wishin’ and hopin’ and thinkin’ and prayin’!

That his jail term will start…. 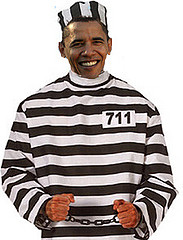 On November 30th, Carl Gallups, 1330 WEBY AM, Gulf Coast Talk Radio reported on his show “Freedom Friday” the following two important news stories about Obama’s ineligibility.  A You Tube of that program was posted on WTPOTUS by Itooktheredpill.  From that video, there were two news stories.  One was reported by World Net Daily in the article,  “Eligibility Challenge Returns to Haunt Florida”.

Previously in the case, Michael C. Voeltz vs Defendants Barack H. Obama et al,  Florida Circuit Judge Terry Lewis,  said that according to Florida’s election law Obama’s constitutional eligibility could not be challenged because he hadn’t yet been nominated to the position.  WND reported, ” Florida law provides that anyone qualified to vote in an election may challenge a candidate based on ‘ineligibility of the successful candidate for the nomination or office in dispute.”    Michael Voeltz is a registered democrat, and he and his attorney, Larry Klayman were told that Voeltz has standing to bring the case.   Since Obama was elected president, this case can now proceed.  They are asking that results of the presidential election in Florida be quashed.

Secondly,   Mr. Gallups stated that the PPSimmons Channel has “insider information” and reported the following.   It was transcribed from the video beginning at 1:27.

“A surprising and potentially devastating ELIGIBILITY EVENT is scheduled to happen before the January 6th Electoral College certification, perhaps by the middle of December. This event most likely will be aired on national cable television and around the world exposing Obama’s ineligibility. The person doing the exposing is a very important person with constitutional standing to do the exposing of the evidence against Obama.”

Anyone who ran for president has constitutional standing and can present the information. We know it won’t be a demoncRat who abides by the Constitution.  Who is the person that has the guts to expose Obama and handle the ridicule from the radical Left that is sure to come?

My thoughts.    This unknown person has all of the evidence in his possession, and is willing to go out on a limb and face the American public with evidence that can potentially stop the Marxist Communist train in its tracks.    We know Donald Trump was willing to expose Obama just so far.  The media refused to vet Obama even having the evidence of a birth certificate forgery put before them, and they did little to broadcast Sheriff Joe’s evidence from their months long investigation.   Ken Bennett,  AZ Secretary of State, stuck his head in the sand when he had the chance to stop Obama from being on their State ballot when Hawaii refused to certify his birth certificate.    If Donald Trump is involved, will he play the final Trump card?  To whom might he pass that card?

Is this to much to hope for?  Will we be devastated and defeated again?  Or will this challenge and evidence finally bring down the man who usurped the office of the president?    Will justice finally be served?

Who Will Be a Patriot and a Hero?

Who Will Stand Up for America?

58 responses to “Obama will be “Exposed” as Ineligible Soon!”