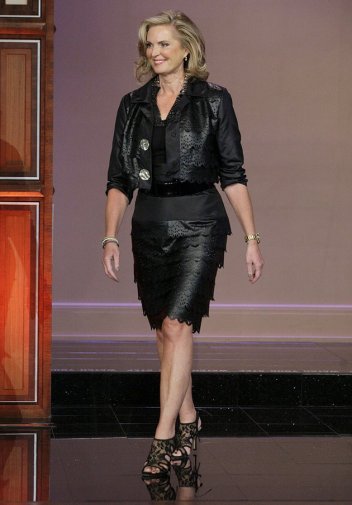 Yahoo! headlined this story on their front page today:

The would-be first lady wears a questionable wardrobe choice on a late-night show.

When you click that link, you get a page entitled “OMG!” and then, under the title, “What Were They Thinking?!”, is this:

Ann Romney, whose hubby, Mitt, is running to become the next president of the United States, left her campaign-trail cardigan at home while making an appearance on “The Tonight Show With Jay Leno” on Wednesday. Instead, Romney sported an odd black tiered leather skirt (although it looked a little more like pleather) and matching jacket, along with a pair of lacy heels. Perhaps her next stop was a biker bar?

That’s the outfit at the top of the post.  The one that Yahoo! characterizes as an “odd fashion faux pas” and inappropriate, in their opinion, for this lady to wear on LATE-NIGHT TV.  What’s odd about her outfit?  She looks great. If she can carry it off and, imho, she can, more power to her.  Notice the “biker bar” slam?  Imagine anything remotely like that being said about Michelle Obama.  Or the backhanded snark about her cardigans.

Now let’s compare and contrast that story to a relatively recent one written after Michelle Obama appeared on Nickelodeon, a television channel for children.  On a page entitled “Glitterazzi, Where Pop Meets Power”, and under the heading “First Lady Michelle Obama Rocks Youthful Sparkles At Kids’ Choice Awards”, came this:

Michelle Obama might’ve been presenting an award at Nickelodeon’s Kids’ Choice Awards, but she definitely takes home the award for most stunningly stylish.

If you thought the First Lady couldn’t pull off skinny jeans, then you are absolutely wrong. Michelle flaunted her flawless legs in a pair of Helmut Lang foil wash jeans, and completed the look with a Wes Gordon metallic houndstooth jacket and pointy black stilettos.

Michelle attended the awards to present Taylor Swift with the “Big Help Award” for all of her amazing charitable efforts.

We really thought we loved seeing the FLOTUS in her trademark preppy dresses — but, now, we are totally into this FLOTUS rockstar looks! 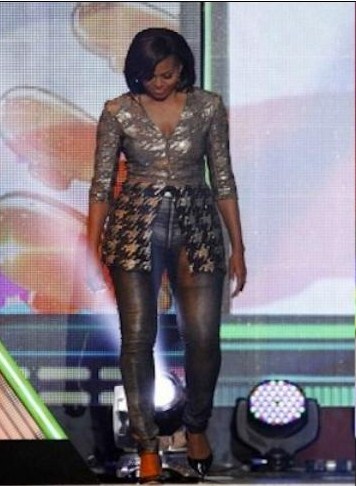 So what’s the diff here?  Do you read any snarky comments about “biker bars”?  Michelle seems to be channeling rock stars, so do you see any suggestions that her next stop might be a Cher concert? Or is that outfit more appropriate for a disco?  You be the judge.

There’s no mention in the first story about Ann’s “flawless legs” or her many “amazing charitable efforts,” which include giving $4 million to charity last year!

Are they making an ageist statement here?  Is it a faux pas for Ann to wear that youthful outfit on late-night TV, but okay for Michelle to wear an inappropriate, “questionable,” somewhat trashy and ill-fitting outfit on children’s TV, because Michelle is younger?

I don’t think they want to go there.  Is this a WAR ON SIXTY-SOMETHINGS?  If it’s good enough for Tina Turner, who’s seventy-something,  it’s appropriate for Ann Romney.   They just don’t like it when Republicans “appropriate” their techniques for connecting with people.  Do they have something against bikers, btw?

We’ve noticed since the beginning of the Obamanation, that the media falls all over itself to declare Michelle a fashion icon.

When Michelle wears shoes that cost hundreds of dollars, or dresses that cost thousands, there is NO mention of her wealth or the inappropriateness of wearing expensive clothing while others suffer during this recession/depression. However, whenever Ann wears expensive outfits, the media never fail to point out the cost or their perception of inappropriateness.

This is nothing new. Remember how they excoriated Sarah Palin for buying a wardrobe to campaign in, as if Hillary Clinton didn’t do the same?

The mendacity of the media knows no bounds.