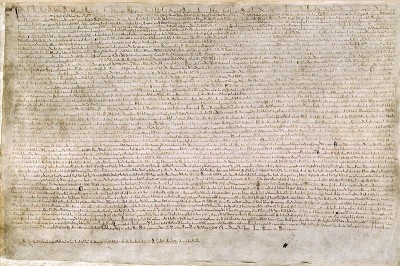 Despite the  Romney campaign’s knee-jerk and foolish denial, there’s absolutely nothing wrong with anyone pointing out that the United States of America shares an “Anglo-Saxon heritage” with the peoples of the United Kingdom.  This is fact.  Saying so displays no “racial insensitivity” whatsoever.

We are part of an Anglo-Saxon heritage, and he feels that the special relationship is special,” the adviser said of Mr Romney, adding: “The White House didn’t fully appreciate the shared history we have”.

These anonymous “advisors” could well be (probably are) illusory and this could be (likely is) nothing more than another progressive, left-wing JournOlist ploy to damage Romney by any means necessary.  Nevertheless:

The greatest evidence of our shared heritage:  The Magna Carta

Magna Carta, also called Magna Carta Libertatum or The Great Charter of the Liberties of England, is an English charter, originally issued in Latin in the year 1215 …

The 1215 charter required King John of England to proclaim certain liberties, and accept that his will was not arbitrary, for example by explicitly accepting that no “freeman” (in the sense of non-serf) could be punished except through the law of the land, a right which is still in existence today.

Magna Carta was the first document forced onto an English King by a group of his subjects, the feudal barons, in an attempt to limit his powers by law and protect their privileges. It was preceded and directly influenced by the Charter of Liberties in 1100, in which King Henry I had specified particular areas wherein his powers would be limited. … The charter was an important part of the extensive historical process that led to the rule of constitutional law in the English speaking world. …

The United States Supreme Court has explicitly referenced Lord Coke‘s analysis of Magna Carta as an antecedent of the Sixth Amendment’s right to a speedy trial.

“This heritage is quite apparent.”  Even Wikipedia says so.

Because Barack Hussein Obama II has indicated that he wants to “fundamentally transform” the United States and because he has excoriated the Constitution as merely a “charter  of negative liberties,” with “deep flaws,” it becomes obvious that Obama does not understand the importance of the Constitution to our Republic.  This foundational charter was designed to limit government and to protect and preserve our God-given, self-evident rights.  What Obama fails to grasp is the fundamental truth of the Constitution:

The government does NOT exist to bestow rights or to redistribute the wealth of others to anyone; the government exists ONLY to preserve and to defend the “unalienable Rights” with which we all are born.

We’re still wondering why the Churchill bust was removed from  the White House and sent back to the UK.  Dr. Paul Kengor’s recent book, The Communist: Frank Marshall Davis: The Untold Story of Barack Obama’s Mentor, tells us that Obama’s mentor, Frank Marshall Davis, despised Churchill as a colonialist. That might be one explanation for Churchill’s banishment.  Kengor wrote:

Davis also disliked Churchill because the British prime minister was the ultimate anti-communist. Davis, to the contrary, was so pro-communist that he was an actual card-carrying member of Communist Party USA.

I first found examples of Frank Marshall Davis blasting Churchill in articles he wrote for the Associated Negro Press in October-September 1943, the height of World War II. He excoriated Churchill as an imperialist, a warmonger seeking domination and “supremacy.” “The only people Churchill gives a rap about,” charged Davis, “are the white people of the British Empire.” Churchill hoped to “bludgeon all other countries into submission,” and was seeking American support in that cruel endeavor.

Needless to say, this was very much a rare opinion on Churchill, alien to any American’s wartime thinking. It was Churchill’s country, after all, that had been attacked. The only place this shocking opinion could be found was Stalin’s Kremlin and the communist press.

What’s worse?  That some anonymous “advisor” is alleged to have said (gasp!) that the US shares an Anglo-Saxon heritage with the UK or that the current president of the US had a card-carrying member of the Communist Party as his chief mentor while growing up?