The Corrupt Obama Administration and the Lamestream Media Aren’t Reporting?  Why Might that Be? 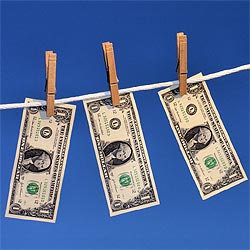 “Money laundering happens in almost every country in the world, and a single scheme typically involves transferring money through several countries in order to obscure its origins.

Money laundering, at its simplest, is the act of making money that comes from Source A look like it comes from Source B. In practice, criminals are trying to disguise the origins of money obtained through illegal activities so it looks like it was obtained from legal sources. Otherwise, they can’t use the money because it would connect them to the criminal activity, and law-enforcement officials would seize it.”

NEW YORK, NY, Apr 23, 2012 (MARKETWIRE via COMTEX) — In a lawsuit alleged to involve the largest money laundering network in United States history, Spire Law Group, LLP — on behalf of home owners across the Country — has filed a mass tort action in the Supreme Court of New York, County of Kings.   Home owners across the country have sued every major bank servicer and their subsidiaries — formed in countries known as havens for money laundering such as the Cayman Islands, the Isle of Man, Luxembourg and Malaysia — alleging that while the Obama Administration was publicly encouraging loan modifications for home owners, it was privately ratifying the formation of these shell companies in violation of the United States Patriot Act, and State and Federal law.

The case further alleges that through these obscure foreign companies, Bank of America, J.P. Morgan, Wells Fargo Bank, Citibank, Citigroup, One West Bank, and numerous other federally chartered banks stole hundreds of millions of dollars of home owners’ money during the last decade and then laundered it through offshore companies.   The complaint, Index No. 500827, was filed by Spire Law Group, LLP, and several of the Firm’s affiliates and partners across the United States.

Far from being ambiguous, this is a complaint that “names names.” Indeed, the lawsuit identifies specific companies and the offshore countries used in this enormous money laundering scheme. Federally Chartered Banks’ theft of money and their utilization of offshore tax haven subsidiaries represent potential FDIC violations, violations of New York law, and countless other legal wrongdoings under state and federal law.

“The laundering of trillions of dollars of U.S. taxpayer money — and the wrongful taking of the homes of those taxpayers — was known by the Administration and expressly supported by it. Evidence uncovered by the plaintiffs revealed that the Administration ignored its own agencies’ reports — and reports from the Department of Homeland Security — about this situation, dating as far back as 2010.   Worse, the Administration purported to endorse a ‘national bank settlement’ without disclosing or having any public discourse whatsoever about the thousands of foreign tax havens now wholly owned by our nation’s banks.  Fortunately, no home owner is bound to enter into this fraudulent bank settlement,”  stated Eric J. Wittenberg of Columbus, Ohio — a noted trial lawyer, author and student of US history — on behalf of plaintiffs in the case.

The suing home owners reveal how deeply they were defrauded by bank and governmental corruption — and are suing for conversion, larceny, fraud, and for violations of other provisions of New York state law committed by these financial institutions and their offshore counterparts.

This lawsuit explains why loans were, in general, rarely modified after 2009. It explains why the entire bank crisis worsened, crippling the economy of the United States and stripping countless home owners of their piece of the American dream. It is indeed a fact that the Administration has spent far more money stopping bank investigations, than they have investigating them. When the Administration’s agencies (like the FDIC) blew the whistle, their reports were ignored.

The case is styled Abeel v. Bank of America, etc., et al. — and includes such entities as ML Banderia Cayman BRL Inc., ML Whitby Luxembourg S.A.R.L. and J.P Morgan Asset Management Luxembourg S.A. — as well as hundreds of other obscure offshore entities somehow “owned” by federally chartered banks and formed “under the nose” of the Administration and the FDIC.

“As if it is not bad enough that banks collect money and do not credit it to homeowners’ accounts, and as if it is not bad enough that those banks then foreclose when they know they do not have a legally enforceable interest in the realty, we now learn that they have been operating under unbridled free reign given by the Administration and some states’ Attorneys General in formulating this international money laundering network. Now that the light of day has been shined on it, I believe we can all rest assured that the beginning of the end of the bank crisis has arrived.”

All United States home owners may have the right to bring a lawsuit of this kind if they paid money to a national bank servicer during the years 2003 through 2009.

One lawyer impacted by the corruption — Mitchell J. Stein, who formerly represented the FDIC, the RTC and the FSLIC during the Savings and Loan scandal of the 1990s, and who predicted all of the foregoing in open court two years ago — commented:

“Two years ago, I remarked in open court to a Los Angeles Superior Court Judge, as well as to legislators including Senator Dianne Feinstein’s office during a multitude of  in-person meetings, that the ongoing violations of the Patriot Act by these financial institutions was outrageous and a breach of the public trust of unprecedented proportions,” said Stein.

“The size and scope of this misconduct — stretching to far-away islands never before having standing as approved United States Bank affiliates — is remarkable and emblematic of what we have seen,” he continued. “The bank crisis represents the height of corruption and brazen behavior where our historically trusted financial institutions have no qualms about breaking the law, because they have the Administration behind them. Banks do well enough when they operate lawfully without needing to be permitted to operate as criminal enterprises that steal money from United States citizens.”

“Having been in the trenches of the bank crisis for years, I always knew that the misconduct was being conducted by a network. When I started litigating against banks, however, I could have never imagined that it would be this extensive. I look forward to taking discovery of these thousands of obscure foreign entities and to obtaining for homeowners their constitutionally entitled injuries for this international ring of theft and deception.”

Comments were requested from the Attorney Generals’ offices in NY, CA, NV, and MA and the White House, but no comment was provided.

Spire Law Group, LLP is a national law firm whose motto is “the public should be protected — at all costs — from corruption in whatever form it presents itself.” The Firm is comprised of lawyers nationally with more than 250-years of experience in a span of matters ranging from representing large corporations and wealthy individuals, to also representing the masses. The Firm is at the front lines litigating against government officials, banks, defunct loan pools, and now the very offshore entities where the corruption was enabled and perpetrated.