A Party Rots From the Head Down – Open Thread 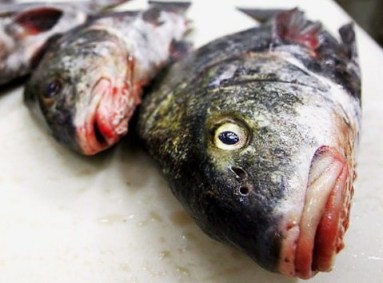 Four different stories in today’s news point out the corruption and/or arrogance of the Democrat Party and its leaders–like a fish, rotting from the top down.

The Indiana Democratic Party allegedly was involved in forging citizen names on presidential primary petitions in 2008 (h/t Rob and Renee):

Felony charges related to election fraud have touched the 2008 race for the highest office in the land.

The officials are accused of taking part in a scheme to fake signatures and names on the primary petitions needed to run for president. Court papers say the plan was hatched by local Democratic Party officials inside the local party headquarters. …

[Butch] Morgan, the County Democratic Chairman, allegedly “instructed Mr. [Lucas] Burkett, Pamela Brunette, Beverly Shelton, and Dustin Blythe to forge ballot petitions for presidential candidates,” and that “all of them agreed to follow these instructions” by copying names and signatures from old election petitions.

Indiana State Police investigators identified a total of 22 petitions that appeared to be faked, yet sailed through the Voter Registration Board as legitimate documents. The signature of the board’s Republican supervisor, Linda Silcott, which is required for legal certification, appeared to be rubber stamped on the documents. She told investigators that she did not remember signing or authorizing her rubber stamp to be used.

Silcott also told investigators that she recognized the handwriting on the alleged forged Obama petitions as that of Blythe’s.

Obama could (and should) have been kicked off the ballot, had anyone discovered the fraud in time.  This story concerns a Democrat who embezzled $7 million from the campaign coffers of fellow Democrats.

Kinde Durkee, once a trusted treasurer to dozens of California Democrats, pleaded guilty in the biggest campaign embezzlement case to hit U.S. politics.

In a federal court in Sacramento, Durkee admitted to stealing more than $7 million from roughly 50 clients during an 11-year period from January 2000 to September 2011.

Durkee, 59, was charged with five counts of mail fraud, and federal prosecutors will recommend a sentence of 11 to 14 years. Durkee is scheduled to be sentenced in June. …

None of the money that Durkee stole has been recovered at this time. But she and her husband have agreed to turn over to the Justice Department property they own in Burbank, which will then sell.

[Dianne] Feinstein and other California Democrats — including Reps. Loretta and Linda Sanchez and Rep. Susan Davis — have sued her for millions in lost campaign donations.

Now this interesting story has it all:

A major donor to President Barack Obama has been accused of defrauding a businessman and impersonating a bank official, creating new headaches for Obama’s re-election campaign as it deals with the questionable history of another top supporter.

The New York donor, Abake Assongba, and her husband contributed more than $50,000 to Obama’s re-election effort this year, federal records show. But Assongba is also fending off a civil court case in Florida, where she’s accused of thieving more than $650,000 to help build a multimillion-dollar home in the state — a charge her husband denies.

[The Obama] campaign returned $200,000 last month to Carlos and Alberto Cardona, the brothers of a Mexican fugitive wanted on federal drug charges. …

Assongba was listed on Obama’s campaign website as one of its volunteer fundraisers — a much smaller group of about 440 people.

Assongba and her husband, Anthony J.W. DeRosa, run a charity called Abake’s Foundation that distributes school supplies and food in Benin, Africa. A photo posted on Assongba’s Facebook page shows the couple standing next to Obama at a May 2010 fundraiser. …

Assongba has given more than $70,000 to Democratic candidates in recent years, an AP review of Federal Election Commission data shows. Her larger contributions include $35,000 to the Obama Victory Fund, a joint fundraising committee between Obama and the Democratic Party, and $15,000 to Democrats running for Congress. DeRosa also gave $15,000 to Obama’s victory fund in April 2011, records show.

Abake’s Foundation is listed by the IRS as a registered nonprofit organization; its financial reports were unavailable. A representative who picked up the phone at the foundation’s Benin office declined to answer questions, and instead referred the AP to Assongba.

Finally, this story is my personal favorite. And another one goes under the bus!

Citing an Inspector General’s report that “taxpayer dollars were squandered” on her watch, Martha Johnson submitted her resignation to President Obama as head of the General Services Administration. Johnson says President Obama accepted it, effective at close of business today.

The actions stem from a GSA-sponsored 4-day conference at a luxury hotel outside Las Vegas in 2010.

“GSA spending on conference planning was excessive, wasteful, and in some cases impermissible,” said the I.G. report which said it cost taxpayers over $822,000 of which more than $146,000 was spent on food and beverage catering.

The report also found that GSA incurred “impermissible and questionable miscellaneous expenses” including: mementos for attendees; purchases of clothing for GSA employees; tuxedo rentals; $6,325 on commemorative coins “rewarding” all conference participants for their work.

“He [Obama] was outraged by the excessive spending, questionable dealings with contractors and disregard for taxpayer dollars,” White House Chief of Staff Jack Lew said of Mr. Obama’s reaction to the report. Lew said the president was informed of the matter before his trip to South Korea last month.

Isn’t he the joker? He’s outraged by the waste and excessive spending of taxpayer dollars!

He says, as his wife and daughters return from a taxpayer-funded trip to Las Vegas by way of Mount Rushmore; as We the People pay for those every-Wednesday-night, Hollywood-like soirees in the White House (with Wagyu beef); as Judicial Watch waits, and waits, and waits for a response to their question concerning exactly how much the junket that Michelle and company took to Spain a while back cost the taxpayers. What a card!

He’s outraged when SOME PEOPLE waste taxpayer money. What’s good for the goose …

Here’s another story about the GSA fiasco.  The four who planned this “conference” are suspended.  Ms. Johnson, under the bus!

Update 04/03/2012:   In the interest in fairness, we bring a correction/update on a story that we’ve discussed here in comments at various times.  A Democrat scandal that wasn’t. Well, it was but wasn’t what we thought.

Former Broward County Commissioner Diana Wasserman-Rubin, arrested for “seven counts of unlawful compensation for improperly advocating for and benefiting from government grants written by her husband, Richard Rubin” is not the mother of the DNC’s Debbie Wasserman Schultz, despite that Wikipedia once said so, as did some news stories.  This story has photos of  Wasserman Schultz with her real parents.

The Cuban-born Wasserman-Rubin said she carries the “Wasserman’’ surname from her first husband, father of her two children (neither of whom is in Congress).

“We are not related at all,’’ she said. “… Not related with any connection whatsoever.’’

Wasserman Schultz, meanwhile, is a non-Hispanic Jewish woman whose parents are alive, well and not facing any public corruption charges. She said her father is a CPA, her mom works at Macy’s, and the two have never been involved in politics, ever.

She said she’s seen an occasional Tweet making the erroneous tie, but the misinformed are a small minority.

The congresswoman is 45. The ex-commissioner is soon turning 65. So by that measure, at least, it’s plausible. But that’s where it ends, she said.

“She could technically be my mother,’’ Wasserman Schultz said, ”but I would have to be Cuban-American. And Catholic.’’

Debbie Wasserman Schultz is a “non-Hispanic Jewish” woman?  Isn’t she a white Jewish woman.  Isn’t that how the new lingo goes, or are there exceptions for progressives?