Let’s Corral the Lot of ‘Em!

It should be remembered that it was the Tea Party from Surprise, AZ that originally brought the charges to Sheriff Arpaio to investigate.  They were  concerned about Obama being illegally placed on the AZ presidential ballot when no one had investigated his eligibility to be on the ballot in 2008.  They wanted someone to get to the bottom of all the strange inconsistencies in Obama’s history, and determine if he should or could be on the ballot in AZ.

With threats upon threats from Obama’s thug the Attorney General, Eric the Bolder, the Sheriff maintains his position.  His posse isn’t giving up their investigation.

Since Holder was appointed as the AG with Obama, there have been multiple ongoing investigations and threats thrown at the Sheriff for just doing his job.  On December 15, 2011, the Department of Justice, released a report filled with numerous allegations against the Sheriff’s Department.  These allegations  weren’t backed up with proof  that their department violated the federal rights of Hispanics caught for numerous crimes, but the Left and national media has continued their unrelenting attacks to smear the sheriff and his department unmercifully.  Retaliation and condemnation for upholding and maintaining law and order?

The Sheriff countered their report and told them to prove the civil rights violations.  Instead, the DOJ had  Homeland Security’s  (Sister Napolitano) group responsible for immigration, ICE,  remove the Sheriff’s and his deputies ability to file charges against illegals caught in their county.    The DHS was to send 50 agents to Arizona to take over for the sheriff’s department.    Anyone know if there are 50 agents on site in Maricopa County or was it another bluff or form of intimidation?  Protecting the civil rights of whom,  DOJ?   Illegals?

A full onslaught of  retaliation has come the sheriff’s way through the left wing media, Soros sponsored organizations, and groups like La Raza (a racist group who wants to take back the states lost to Mexico).   Many of these groups have tried to get rid of Joe for the last 20+ years.  The citizens of  Maricopa keep voting him back in…so I guess the citizens like the  lawful work he is doing as do most law abiding citizens in the U.S.

Sheriff Joe wants the evidence to prove what they are saying in the Report and won’t take hearsay or the words of a few incarcerated illegals as proof.  One or two witness accounts does not mean or match the meaning of the word “systemic!”   Cries of racism against the Sheriff’s department from the most racist administration in history?  Who are they kidding, really?   Sheriff Joe is a major thorn in the sides of the Usurper and lying Eric the Bolder.  I’d put the  Sheriff’s record side by side with the corrupt U.S. Attorney Generals  or that of the criminal White Luo  any day of the week!    No match.

The last Conference held by the Sheriff  revealed evidence found by the Posse that Obama’s Selective Service Card and that well known birth certificate produced by Obama were fraudulently created!   Yet, throughout the MSM, there is a pure total blackout of this news.   Information has leaked that news stations and people have been threatened and intimidated into silence.  By whom is what we want to know.  Who is making the threats?   How high does it go?  Talk to us, leak the names of the thugs or organizations who are using fear to keep people silent.  Expose them  for who and what they are, criminals.

Perhaps the Posse and Sheriff will talk about the latest rejection to provide original documents by the Director of the Selective Service, Lawrence G. Romo.  He  was appointed by Obama  and asked to produce for forensic examination, the original of Barack’s forged Selective Service application.  In case you missed reading the letter to Mr. Romo, and the one received in return by Sheriff Arpaio ,  they are below. 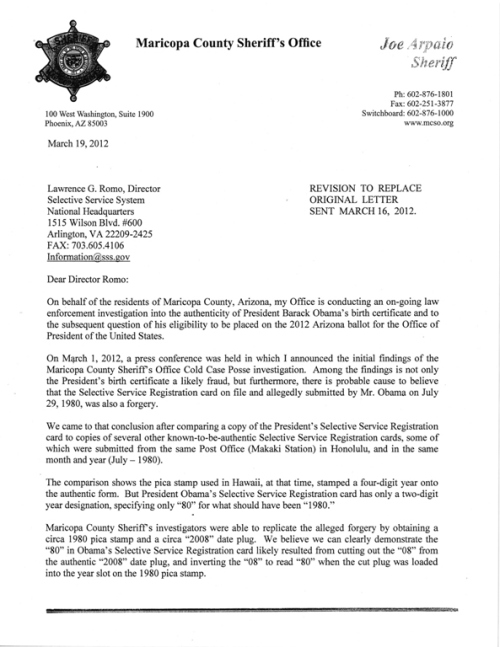 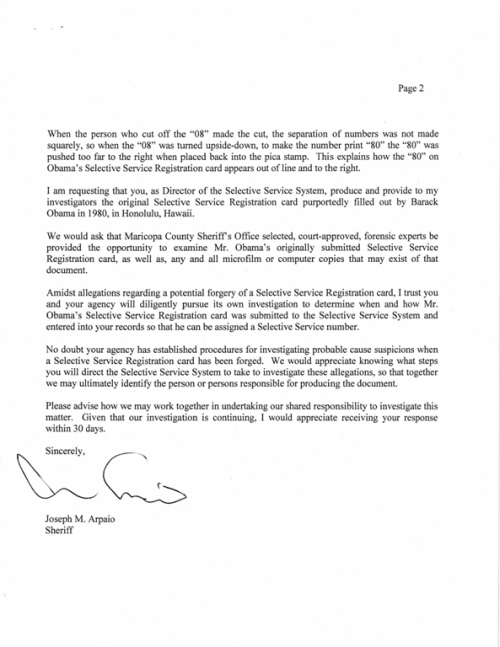 Now for the topping on the biggest cover-up in American history, the return response from Romo’s office to a Chief Law Enforcement officer.  Romo didn’t think it important enough to sign a letter himself, instead he assigned someone else to answer for him, Richard S. Flahavan, Associate Director.  Was Romo a coward or did he refusal to engage in the cover-up?  Passing the buck in more ways than one, they also pass it off to the FBI to investigate.  Exactly who has the responsibility of detecting fraud at the Selective Service System if not their own agency?  They don’t police their own registrations?

Apparently being able to read is not a requirement to work for the Selective Service  System when Flahavan wrote the following letter in response to Sheriff Arpaio.   The most incredible parts of these sentences  are:

THIS AGENCY HAS NO EVIDENCE THAT PRESIDENT OBAMA’S 1980 REGISTRATION IS NOT AUTHENTIC !

IF YOU HAVE ANY CREDIBLE EVIDENCE!!!

The response to Sheriff Arpaio from the Selective Service Administration.

Perhaps the new evidence will be to difficult for the MSM to ignore this time.   Bit by bit, article by article, investigative research and evidence is mounting up.  Pressure and demands by citizens for Congress to investigate must  increase.  The topic needs to be brought up at Town Hall meetings or wherever people congregate.  We can’t relent.

Visualize ethical and criminal charges being brought against Obama the White Luo,  who by his own admission, is ineligible to hold the office of president and reside at 1600 Pennsylvania Ave.   See it.  Believe it.