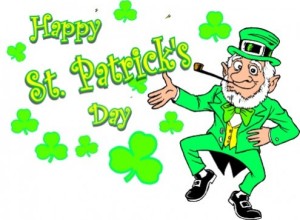 If a man who cannot count finds a four-leaf clover, is he lucky?

Anyone acquainted with Ireland knows that the morning of St. Patrick’s Day consists of the night of the seventeenth of March flavored strongly with the morning of the eighteenth.

For each petal on the shamrock
This brings a wish your way –
Good health, good luck, and happiness
For today and every day.
~Author Unknown

What do you get when you cross poison ivy

with a four-leaf clover?

A rash of good luck.

May your blessings outnumber
The shamrocks that grow,
And may trouble avoid you
Wherever you go.

Oh, Paddy, dear, an’ did ye hear the news that’s goin’ round?
The shamrock is forbid by law to grow on Irish ground!
No more St. Patrick’s Day we’ll keep, his colour can’t be seen,
For there’s a cruel law agin’ the Wearin’ o’ the green.

WTPOTUS Wishes You a Fun and Green St. Paddy’s Day!

Here’s to having some corn beef and cabbage, soda bread,

201 responses to “Top of the Mornin’ and Happy St. Patrick’s Day (Open Thread)”