Another Day, Another Scandal…Tread Marks for Pals? 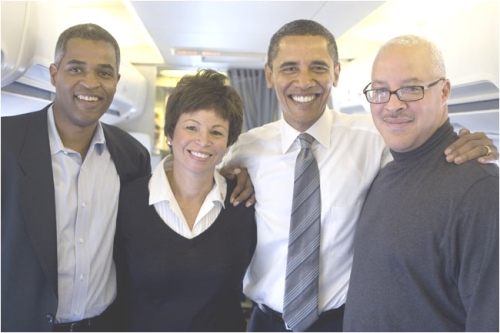 Barack Obama on his campaign plane right before the election with Martin Nesbitt, Valerie Jarrett and Dr. Eric Whitaker David Katz/Obama for America

Four Peas in a Prison Cell…

Only time will tell.

The Chicago Sun Times reports, “According to federal subpoenas and other records, Margaret Davis’ June 9 indictment by a federal grand jury in Springfield is part of a larger criminal investigation involving the health department and other state agencies.

Davis, 60, is scheduled to go on trial in federal court in Springfield on Dec. 6 on a 16-count mail-fraud and money-laundering indictment.   A co-defendant, Tonja Cook, 44, is charged with one count of mail fraud.

According to their indictment, Davis used her roles with the National Black Nurses Association and two other health-care groups to obtain 15 state grants and contracts totaling more than $1 million between December 2005 and March 2009.   She allegedly siphoned off $500,000 of that for personal use.

More than two months after a Chicago nurse got criminally charged for stealing half a million taxpayer dollars from minority outreach programs one media outlet has dared to reveal that a close friend, advisor and donor of President Obama’s is embroiled in the SCANDAL!

It’s the taboo portion of the story that’s been ignored by the mainstream media and conveniently omitted in government press releases announcing the June federal indictment a month after it was filed. The one-time director of the Chicago Chapter of the National Black Nurses Association (Margaret Davis)  faces two decades in prison for defrauding various state grant programs out of approximately $500,000, according to federal authorities.

What the feds haven’t revealed is that the state agency that gave Davis all the money, the Illinois Department of Public Health, was run by one of Obama’s closest pals, Dr. Eric Whitaker, when the cash was disbursed. We know this only because Chicago’s conservative-leaning newspaper has been digging around. This week it published a lengthy article connecting the dots between Whitaker and the corruption scheme.

The state’s convicted felon governor (Rod Blagojevich) appointed Whitaker health director in 2003 after Obama, a state senator at the time, recommended him.  During Whitaker’s four-year tenure, the agency spent millions of taxpayer dollars on highly questionable publicity campaigns to educate African-Americans and other minorities about common diseases in their communities, mainly AIDS.

Nearly $600,000 of it went to Davis and her Black Nurses Association, which received an additional half a million dollars in state grants from other agencies. Whitaker referred to the indicted nurse as “the ultimate advocate for health care and human services” and even gave her a no-bid contract to train college nursing students in administrative areas.

Similar minority programs, many of them “faith-based,” also received big chunks of taxpayer dollars from Whitaker’s agency while he was in charge. Among them is a defunct AIDS awareness program that has been sued by the Illinois Attorney General’s office for misspending $523,546.    Whitaker claims that thousands of grants were distributed when he ran the agency and he “couldn’t have known about the transgressions such as the alleged embezzlement related to a contract with the Chicago Chapter of the National Black Nurses Association.”

He seems to have little worries as he enjoys his lucrative, private-sector job. In 2007, Whitaker resigned to join Michelle Obama at the University of Chicago Medical Center where he makes more than $670,000 a year as executive vice president for strategic affiliations and associate dean for community-based research.

Who is Eric Whitaker? 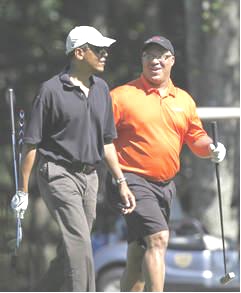 A member of Barack Obama’s tight-knit circle of friends from Hyde Park in Chicago, Whitaker was a fixture on the 2008 presidential campaign trail, often sitting with Obama on the campaign plane, serving as a sounding board for the candidate and helping to keep him grounded with frequent basketball games.

Whitaker, who has been friends with Obama since both were in graduate school, works at the University of Chicago Medical Center, where Michelle Obama also worked.

Whitaker is a medical doctor and served as Illinois Department of Public Health director from 2003 to 2007 and now serves as executive vice president of the University of Chicago’s Medical Center.  Obama has said he put in a good word for his friend to political fundraiser Tony Rezko, a conversation which Obama was asked about after Rezko was convicted of bribery and fraud.

Since Obama’s been president, the Whitakers have vacationed with the First Family in Martha’s Vineyard and Hawaii.

Do they have scrabble games in prison?

26 responses to “Another Day, Another Scandal…Tread Marks for Pals?”