“No Person except a natural born Citizen”

From Article Two, Section 1 of the US Constitution

I never thought I’d long for the days of Robert Byrd and his “pocket Constitution,” but alas, Dick Durbin has managed to eke out that much nostalgia after his DREAM Act gaffe yesterday. Real Clear Politics and Doug Powers at the Boss Emeritus’ site caught this tender moment from Durbin as he addressed school-age “undocumented” aliens and promised that his DREAM Act would allow them to become tomorrow’s Congressmen, Senators, and … Presidents?

“When I look around this room, I see America’s future. Our doctors, our teachers, our nurses, our engineers, our scientists, our soldiers, our Congressman, our Senators and maybe our President.”

I know that reading the Constitution has fallen out of fashion on Capitol Hill; Democrats pitched a fit when the new Republican majority in the House wanted to start the 112th Session by reading it aloud. But Durbin might want to read Article II, Section 1 of the founding document, as it’s pretty clear on eligibility for the nation’s top executive position:

“No Person except a natural born Citizen, or a Citizen of the United States, at the time of the Adoption of this Constitution, shall be eligible to the Office of President.”

Durbin’s Constitutional illiteracy explains a lot, including his DREAM Act.

Ed Morrissey, Allahpundit, Doug Powers, and Michelle Malkin might want to read how the U.S. Supreme Court construed Article II, Section 1 of the founding document in the case of Minor v. Happersett.

MINOR V. HAPPERSETT IS BINDING PRECEDENT AS TO THE CONSTITUTIONAL DEFINITION OF A NATURAL BORN CITIZEN.

What they will find is that the U.S. Supreme Court construed the Article II, Section 1 term “natural born Citizen” as:

“born of citizen parents within the jurisdiction of the United States.“

By his own birth narrative, the man known as Barack Hussein Obama II (also known as Barry Soetoro) is not a natural born Citizen of the United States.

Why? Because his father was not a U.S. Citizen at the time of his birth.

By his own birth narrative, Soetoro/Obama:

1) Was born a citizen of the United States, under the 14th Amendment.

2) Was NOT born a natural born Citizen of the United States, under Article II Section 1 as construed by the Supreme Court in Minor v. Happersett.

3) Was born a natural born British subject, under both the Laws of Nature and The British Nationality Act of 1948… a fact that his own campaign admitted:

When Barack Obama Jr. was born on Aug. 4,1961, in Honolulu, Kenya was a British colony, still part of the United Kingdom’s dwindling empire. As a Kenyan native, Barack Obama Sr. was a British subject whose citizenship status was governed by The British Nationality Act of 1948. That same act governed the status of Obama Sr.‘s children.

If Obama had been born a natural born Citizen of the United States, under Article II Section 1, then he never would have needed the 14th Amendment to claim U.S. citizenship.

… And yet he did claim he his citizenship was based on the 14th Amendment!

The Obama campaign initially claimed Obama:
“became a citizen at birth under the first section of the 14th Amendment”:

The truth about Barack’s birth certificate

Lie:
Obama Is Not a Natural Born Citizen

Truth:
Senator Obama was born in Hawaii in 1961, after it became a state on August 21st, 1959. Obama became a citizen at birth under the first section of the 14th Amendment

But then they scrubbed that text and replaced it with this:

The Truth About Barack’s Birth Certificate

Smears claiming Barack Obama doesn’t have a birth certificate aren’t actually about that piece of paper — they’re about manipulating people into thinking Barack is not an American citizen.

The truth is, Barack Obama was born in the state of Hawaii in 1961, a native citizen of the United States of America.

Next time someone talks about Barack’s birth certificate, make sure they see this page.

Why did the Obama campaign take a “14th Amendment” defense, but then scrub all references to the 14th Amendment?

Perhaps because they realized that claiming “Obama became a citizen at birth under the first section of the 14th Amendment” OUTED HIM AS NOT A NATURAL BORN CITIZEN!

“The Fourteenth Amendment did not affect the citizenship of women any more than it did of men. In this particular, therefore, the rights of Mrs. Minor do not depend upon the amendment. She has always been a citizen from her birth and entitled to all the privileges and immunities of citizenship. The amendment prohibited the state, of which she is a citizen, from abridging any of her privileges and immunities as a citizen of the United States, but it did not confer citizenship on her. That she had before its adoption.”

Someone who is a “natural born citizen” does not need the 14th amendment to claim U.S. citizenship.

The only reason for the Obama campaign to claim that “Obama became a citizen at birth under the first section of the 14th Amendment” is because he was not, and is not, a natural born citizen. 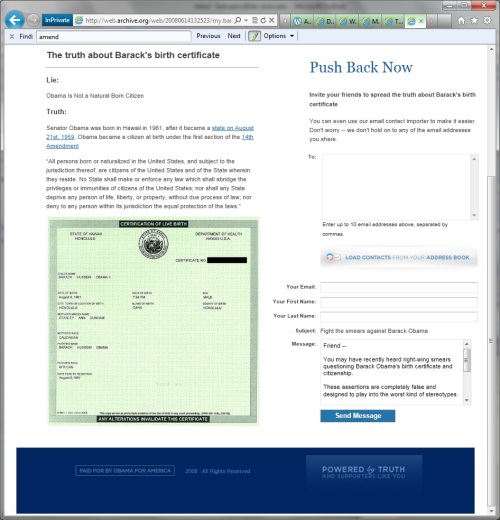 This entry was posted in Natural Born Citizen Discussion. Bookmark the permalink.

70 responses to ““No Person except a natural born Citizen””