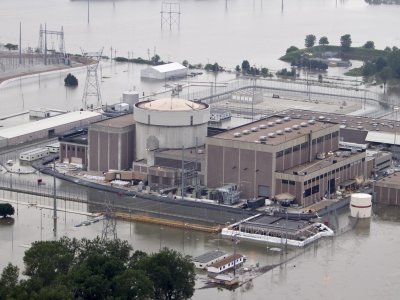 Disclaimer:  Sorcha Faal, the nom de plume of David Booth,  always writes intriguing conspiracy news stories that are full of speculation and usually have no viable sources.  Yet this article is filled with sources for his information.  Except, as yet ,  no source for the information coming from Russia’s Federal Atomic Energy Agency has been located; so this information  can not be verified through another news source.

If what he writes is true, the Obama regime is  complicit in not revealing information of concern to the  American public and it shows a blatant disregard for human life.  Our lives.

We still have a reason to be concerned about the flooding at the Nebraska Nuclear Plants and if the public is getting up-to-date information from the  government  or the media.

By:  Sorcha Faal, and as reported to her Western Subscribers
June 16, 2011

According to this report, the Fort Calhoun Nuclear Plant suffered a “catastrophic loss of cooling” to one of its idle spent fuel rod pools on 7 June after this plant was deluged with water caused by the historic flooding of the Missouri River which resulted in a fire causing the Federal Aviation Agency (FAA) to issue a “no-fly ban” over the area.

Located about 20 minutes outside downtown Omaha, the largest city in Nebraska, the Fort Calhoun Nuclear Plant is owned by Omaha Public Power District (OPPD) who on their website denies their plant is at a “Level 4” emergency by stating:

“This terminology is not accurate, and is not how emergencies at nuclear power plants are classified.”

Russian atomic scientists in this FAAE report, however, say that this OPPD statement is an “outright falsehood” as all nuclear plants in the world operate under the guidelines of the International Nuclear and Radiological Event Scale (INES) which clearly states the “events” occurring at the Fort Calhoun Nuclear Power Plant do, indeed, put it in the “Level 4” emergency category of an “accident with local consequences” thus making this one of the worst nuclear accidents in US history. 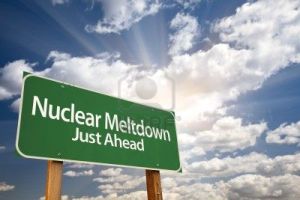 Though this report confirms independent readings in the United States of “negligible release of nuclear gasses” related to this accident it warns that by the Obama regimes censoring of this event for “political purposes” it risks a “serious blowback” from the American public should they gain knowledge of this being hidden from them.

Interesting to note about this event was the Nuclear Regulatory Commission (NRC) Chief, Gregory B. Jaczko, blasting the Obama regime just days before the near meltdown of the Fort Calhoun Nuclear Power Plant by declaring that

“the policy of not enforcing most fire code violations at dozens of nuclear plants is “unacceptable” and has tied the hands of NRC inspectors.”

This report further notes that the “cover-up” of this nuclear disaster by President Obama is being based on his “fantasy” of creating so-called green jobs which he (strangely) includes nuclear power into as his efforts to bankrupt the US coal industry proceed at a record breaking pace.

Unknown to the American people about Obama’s “war” on the US coal industry is it’s estimated to cost them over a 60% increase in their electricity bills by 2014 and cause over 250,000 jobs to be lost in an already beleaguered economy.

More ominous for those American people whose lives depend on the coal industry that is being deliberately destroyed is the Obama regime’s massive “security exercise” currently ongoing in the major coal mining States of Ohio, Kentucky and West Virginia, and as we can read about, in part, as reported by InfoWars.Com:

“If you’re still living under the delusion that the TSA is just restricted to airports then think again. A joint VIPR “security exercise” involving military personnel has Transportation Security Administration workers covering 5,000 miles and three states, illustrating once again how the TSA is turning into a literal occupying army for domestic repression in America.”

The TSA, in alliance with a whole host of federal, state, local agencies as well as military personnel, is currently conducting a massive “security exercise” throughout Ohio, Kentucky and West Virginia.

“The participating teams are composed of a variety of TSA assets including federal air marshals, canine teams, inspectors and bomb appraisal officers. They will be joined by state and local law enforcement officials to supplement existing resources, provide detection and response capabilities. The exercise will utilize multiple airborne assets, including Blackhawk helicopters and fixed wing aircraft as well as waterborne and surface teams,” reports the Marietta Times.

Although the exercise is couched in serious rhetoric about preparedness, it relates to “no specific threat” and the details are nebulous to say the least and seems to revolve around little else than testing out high-tech surveillance equipment and reminding Americans who their bosses are.”

Obama’s fears of the American people turning against nuclear power, should its true dangers be known, appear to be valid as both Germany and Italy (whose people, unlike the Americans, have been told the truth) have turned against it after the disaster in Japan and vowed to close all of their atomic plants.

Perhaps even more sadly for the American people is this report stating that the Obama regime is “walking in lockstep” with Japan in their attempts to keep the truth of nuclear accidents from their citizens; which in the case of the Japanese can only be labeled as horrific as new evidence points to them knowing within hours of the Great Tsunami that their atomic reactors had melted down, but have only today ordered an evacuation of pregnant women from what are called “radiation hotspots.”

With a country that some scientists are now warning may soon become uninhabitable due to radiation damage, and with reports of mutant rabbits and radioactive whales now being reported, one wonders if in knowing the truth the American people would really want to follow Japan’s “example” instead of those people in Germany and Italy?

But, with an already documented 35% increase in the infant mortality rate for American mothers living in the western coastal regions of the US caused by radiation blowing onto them from Japan being ignored by these people there doesn’t seem to be much hope for them.

An article written on Sunday, June 19,  “Several Levees in N. Missouri Breached” reported that “several levees in northern Missouri have been breached and are failing to hold back the surge of water being released from upstream dams.”

Authorities said water — some of it from recent rain — began pouring over levees Saturday night and Sunday morning in Holt and Atchison counties, flooding farmland and numerous homes.

Meanwhile, the Nebraska Public Power District issued a flooding alert Sunday for its Cooper Nuclear power plant near Brownville, Neb., as the Missouri River continues to rise. The declaration is the least serious of four emergency notifications established by the federal commission.   The plant was operating Sunday at full capacity, and there was no threat to plant employees or to the public, said Mark Becker, a spokesman for the Columbus, Neb. based utility. 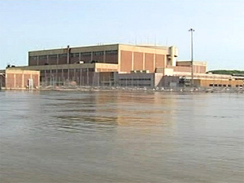 The Fort Calhoun Station, another nuclear plant along the river in eastern Nebraska, issued a similar alert June 6.   That plant near Blair, Neb., has been shut down since April and will not be reactivated until the flooding subsides.

Mark Manchester, who is the deputy director of emergency management for Atchison County,  said the river level has reached 44.6 feet, the highest on record and about 4 to 5 inches higher than 1993 flooding levels. He said minor flooding starts at 33 feet and major flooding at 43 feet.  He said residents in the area had already evacuated their homes, and officials who operate the levee went up in a helicopter and saw several “pretty good size holes starting to form.”

The officials are predicating another breach, which could displace up to 200 more people.