“Jerusalem Is Not Your Capital” states Obama

Obama Wants to Teach Netanyahu and Israelis a Lesson!

Oppose Me, Will You!

Upstage Me, Will You!

The Dictator in Chief at Work – Shoving another Ally under  Obama’s proverbial bus!  Now we are aligned with the PLO!

Obama Signs Document That Tells Israel Jerusalem Is Not Your Capital!!

MEMORANDUM FOR THE SECRETARY OF STATE

SUBJECT: Suspension of Limitations Under the Jerusalem Embassy Act

Pursuant to the authority vested in me as President by the Constitution and the laws of the United States, including section 7(a) of the Jerusalem Embassy Act of 1995 (Public Law 104-45) (the “Act”), I hereby determine that it is necessary, in order to protect the national security interests of the United States, to suspend for a period of 6 months the limitations set forth in sections 3(b) and 7(b) of the Act.

You are hereby authorized and directed to transmit this determination to the Congress, accompanied by a report in accordance with section 7(a) of the Act, and to publish the determination in the Federal Register.

This suspension shall take effect after transmission of this determination and report to the Congress. 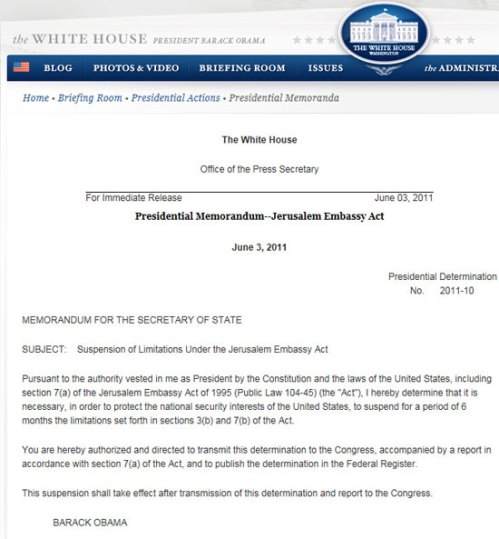 Obama’s stance was proof that neither the U.S. nor the world recognizes Jerusalem as Israel’s capital, Rudeineh told the agency.

Congress in 1995 passed a law recognizing Jerusalem as Israel’s capital and stating that “the United States Embassy in Israel should be established in Jerusalem no later than May 31, 1999.” An inbuilt waiver authority allowed the president to postpone the move, in the interests of “national security,” for consecutive six-monthly periods. Reflecting the strong level of support in the U.S. for Israel and for Israel’s claim to Jerusalem, the Jerusalem Embassy Act passed 374-37 in the House and 93-5 in the Senate.

President Clinton was not enthusiastic about the legislation, which he warned “could hinder the peace process.” He allowed it to become law, but without his signature.

Should the Jerusalem embassy not be opened by May 31, 1999, the law stated, the State Department would be barred from spending 50 percent of the funds allocated to buy and maintain official properties abroad during that fiscal year. The due date came and went, and then on June 17  Clinton issued the first “Suspension of Limitations Under the Jerusalem Embassy Act” notice.

President Bush continued the policy every six months, to the continuing frustration of pro-Israel lawmakers who argued that the intent of Congress was for the waiver would only be justified in the case of a genuine security threat. A striking difference between Obama’s waiver notifications and those of President Bush is that in Bush’s case, he inserted into the legal jargon a sentence stating:

“My Administration remains committed to beginning the process of moving our embassy to Jerusalem.”

The phrase appeared in all 16 Bush waiver notifications.

Obama’s latest announcement was welcomed by Palestinian Authority spokesman Nabil Abu Rudeineh. The official P.A. news agency, Wafa, said he called it “encouraging and … consistent with President Obama’s vision of a Palestinian state on the 1967 borders.”

Obama’s stance was proof that neither the U.S. nor the world recognizes Jerusalem as Israel’s capital, Rudeineh told the agency.

“The world has made it clear that East Jerusalem has been occupied since 1967 and that it is the capital of the State of Palestine in the framework of the two-state solution.”

Israel insists that Jerusalem is its “eternal, indivisible” capital, a claim it says dates back some 3,000 years, to the reign of the biblical King David from the city.   Historians note that while Jerusalem was fallen under the control of many empires and powers, no nation other than the Jews ever declared it its capital.

The Palestinians want Jerusalem as the capital of a future independent state.

“Jerusalem is the crux of the question of Palestine and the key to war and peace in the region,” the Palestine Liberation Organization’s mission to the United Nations declares on its Web site.”

73 responses to ““Jerusalem Is Not Your Capital” states Obama”