Do Fear the Reaper 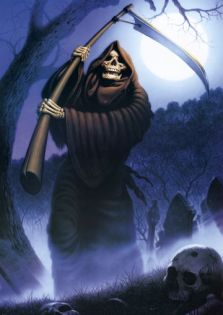 It occurred to me, while watching Glenn Beck’s expose on Marxism and the Nazis, that at least Hitler didn’t make those he murdered pay for the gas and the gas chambers. Think about it:  They’ll force us all to pay for long-term care “insurance”, but who will own and control the facilities where we will be cared for? (But not long term. Insurance, it’s not, unless that means that you will assuredly die there, in “long term care.” They must lie awake at night thinking up this Orwellian language and then laughing at us when they use it to hide what they’re really up to.)

So who will control these “long term care” facilities? The government. In facilities staffed by SEIU thugs, no doubt. Run by the very people who will decide whether or not you’re worth keeping alive, long term or short term, according to the scheme that Ezekiel Emanuel and Cass Sunstein proposed–the Complete Lives System (aka, we decide when your life is “complete”).

It’s in Obamacare. The real death panels. As George Bernard Shaw the Marxist proposed: Evaluate people to see if they’re productive. If they’re not, do away with them, in a humane way, of course. If this isn’t chilling (and MARXIST), I don’t know what is: In an article published in the British medical journal Lancet, Emanuel and co-authors advocated health rationing that discriminates against older people.

Got that? Stereotypes are bad.  Rationing “life years” apparently is desirable, not discriminatory, because justice “requires” the “fair distribution” of LIFE YEARS!!!

So who will decide how many life years you get? Who will distribute these years, as if the years that you are allowed to live are a commodity that guys like Sunstein, Emanuel, and of course Obama get to hand out, like so many loaves of bread?

Who will play the Grim Reaper? “Don’t fear the Reaper.” He’s just meting out “justice.” And here, for millenia, we believed that God allots to Man the number of years he has on this Earth. More fool us.  That’s just superstitious claptrap, in Marxist philosophy.  The “opium of the masses.”

Here’s a good article that I stumbled across:

Long, but interesting, if you have the time to read it.

45 responses to “Do Fear the Reaper”